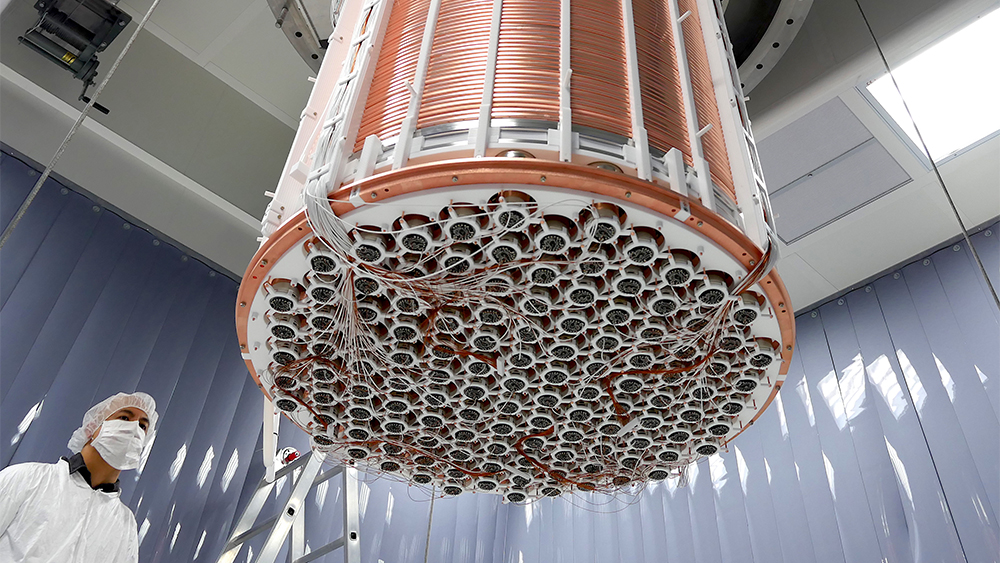 The core of the XENON1T, the time projection chamber, being installed. (Image: zVg)

Since the end of 2018, the XENON1T detector in the underground laboratory at Gran Sasso, part of the National Institute for Nuclear Physics in Italy, has been searching for particles of dark matter, the material that makes up 85 percent of the matter in the universe. The world’s most sensitive detector has not yet found any particles of dark matter, but some unusual events have been observed. If a particle flies through the liquefied xenon, it may collide with the xenon atoms, thereby triggering weak light signals and hitting electrons from the affected xenon atom. When comparing the XENON1T data with the expected 232 events of known particles, however, the researchers found a surprising excess of 53 events.

The members of the XENON collaboration, in which 163 scientists from 28 institutions in 11 countries are involved, have not yet been able to explain the origin of these unexpected signals. “The new findings from our xenon detector are very exciting,” says Laura Baudis, professor of physics at the University of Zurich and a lead member of the project team. “We do not claim to have found dark matter – but we cannot yet fully explain the unexpected signal excess.”

Origin of the signals still a mystery

At the moment there are various possible explanations. One possibility could be the presence of extremely small amounts of tritium in the liquid xenon. Tritium, a radioactive isotope of hydrogen, spontaneously decays by emitting an antineutrino and an electron. Even tiny amounts of tritium being present in the detector could explain the signal. However, there are currently no independent measurements to confirm or exclude the presence of tritium.

More excitingly, another explanation could be the existence of a new particle. The excess observed has an energy spectrum similar to that expected from axions produced in the sun. Axions are hypothetical particles that correspond to the symmetry of the nuclear force observed in nature. Detection of these would mark the first observation of new class of particles. “This would have a large impact on our understanding of fundamental physics, and of astrophysical phenomena. Moreover, axions produced in the early universe could also be the source of dark matter,” says Baudis.

Alternatively, the excess could also be due to neutrinos, trillions of which pass through the detector, unhindered, every second. One explanation could be that the magnetic moment of neutrinos is larger than its value in the standard model of elementary particles. This would be a strong indication of new interactions falling outside of the standard model.

“While our detector was mainly designed to detect dark matter particles, its low energy threshold coupled to an extremely low background allows us to search for other rare interactions and particles beyond the standard model of particle physics,” says Dr. Michelle Galloway of UZH who led the data analysis together with doctoral candidates Evan Shockley (University of Chicago) and Jingqiang Ye (University of California San Diego). Dr. Galloway expects to get even more precise data from the upgraded, even more sensitive detector XENONnT which is currently being built and should start collecting data by the end of the year.

Professor Baudis’ team has played a key role in the development and construction of the time projection chamber, in the installation, calibration and read-out electronics of the 494 photo-sensors, and in the measurement of tiny radioactive traces in the detector materials. “We hope that with the help of the XENONnT detector the puzzle will soon be solved,” says Michelle Galloway. “Perhaps the excess comes from the decay of a small amount of tritium atoms in the xenon, however we are intrigued by the more exotic explanations.”

With the XENON1T detector, physicists originally wanted to detect dark matter particles. Theoretical considerations predict that dark matter should very rarely “collide” with a xenon atom in the tank of the detector which is filled with liquid xenon. It thereby transfers energy to the atomic nucleus which subsequently excites other xenon atoms and causes them to emit light. These very faint signals of ultraviolet light and the minute amount of electrical charge which is released by the collision process are detected by means of sensitive light sensors. The detector was switched off for upgrading in 2018: The three times larger active detector mass along with further modifications will boost the new XENONnT detector’s sensitivity considerably.

The XENON1T detector is an international project involving around 160 researchers. In Switzerland the experiment receives funding from the SNSF and the University of Zurich. International support comes from Germany, the USA, Italy, Israel, Portugal, France, Sweden, the Netherlands and from the European Union.