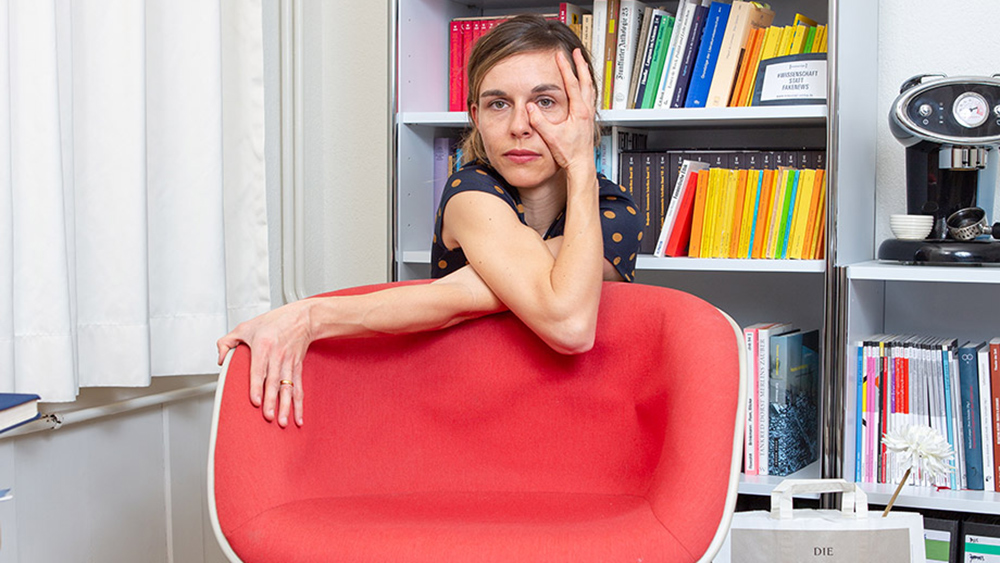 Sophie Witt is heading for a professorship. (Image: Diana Ulrich)

On the cloakroom wall hangs a paper bag from the Freud Museum in Vienna. It is prin­ted with the title page of a historic edition of Sigmund Freud’s The Interpretation of Dreams. Sophie Witt bursts into laughter – yes, she says, she just had to have that paper bag. After all, Freud was the initial inspiration for her research project “Theater and Psychosomatics”. Sophie Witt, senior teaching and research assistant in the Department of German Studies, was selected as a beneficiary of the new funding in­stru­ment of the Swiss National Science Foundation, PRIMA, in 2019. The five-year program is aimed at outstanding junior researchers who are potentially heading for a professorship. The young researcher is currently writing her habilitation. She works, surrounded by books and papers, in a small office in a house next door to the German Department, an oasis of relative calm amid the usual hustle and bustle of a busy aca­de­mic institute.
After her dissertation, in which she examined psychoanalysis from a literary pers­pe­ctive, Sophie Witt found herself rereading Freud’s 1895 Studies on Hysteria and noticed something that struck her as strange: Freud seemed to have a weakness for theatrical scenarios. He describes his patient Emmy von N. in a setting that could be a stage design straight out of Ibsen: “This lady, when I first saw her, was lying on a sofa with her head resting on a leather cushion. She still looked young and had finely-cut features, full of character.”
Sophie Witt’s curiosity was piqued. The word psychosomatic refers to mental suffering expressed in the body. But the way Freud – and other physicians – described psy­cho­somatic cases seemed to reveal more than a purely medical interest. They were clearly fascinated by these talking bodies. This fascination is the focus of Sophie Witt’s research project.

The doctor and his case – the stage show

She jumps up and calls up a famous picture on her computer screen: Doctor and neu­ro­logist Jean-Martin Charcot (1825-1893), whose classes Freud attended, sur­round­ed by his students and colleagues at the Paris Hôpital de la Salpêtrière. The patient Blanche lies flopped backwards in the arms of an assistant, wrist twisted round, eyes closed. Charcot has hypnotized her in order to investigate her case of hysteria. The picture is reminiscent of a scene from the theater – the audience (students and colleagues), standing in a semi-circle as if in an amphitheater, look on in curiosity at the action center-stage: the doctor and his case.
Witt sits back down on her red couch. She originally studied theater studies alongside German language and literature. For a while she also worked in the theater, assisting on various productions at the Nationaltheater Weimar and at the Schauspiel Leipzig, as well as in the independent theater scene in Berlin. She smiles. Nowadays she no longer has an active role in the theater, but works behind the scenes as a board me­mber of the Theater Marie in Aarau. Her experience in the world of theater meant her antenna was attuned to picking up the links between medicine and drama. She found them cropping up again and again, especially in the field of psychosomatics.
The origins of psychosomatic medicine go back to the 18th century, explains Witt. With the rise in popularity of anthropology, a science which tried to integrate the natural sciences and the humanities, the human being became a focus of research. Anthropologists – rather critical of traditional medical research – were concerned with understanding humans “holistically”, not reduced to their biology. Interest grew in the interactions between mind and body.
This interest in psychosomatics is also reflected in literary texts which appeared at that time, for example Karl Philip Moritz’s concept of Erfahrungsseelenkunde (experiential psychology) and his novel Anton Reiser (1785-1790). Schiller’s doctoral dissertation, “On the Connection of the Animal and the Spiritual Nature of Man” (1780), can be read as an early text in the field of psychosomatics. By 1811, the first professorial chair for psychological therapy had been created at the University of Leipzig, to which the physician Johann Christian August Heinroth was appointed.

In the 19th century, with the rise in importance of natural sciences and of psychiatry, interest in psychosomatics faded into the background, says Sophie Witt. Mentally ill people were locked up in institutions and asylums, out of sight and out of mind. But with the arrival of psychoanalysis around 1900, psychosomatics began to be revisited. Here they were again, the talking bodies. But understanding them was a challenge. Despite their medical training, doctors floundered when it came to comprehending the language of the body.
In trying to make rhyme or reason of the body’s poetry, they turned to the arts for inspiration. Medics with an interest in the arts, doctors who dabbled in writing, and authors who also practiced medicine proliferated around this time – Alfred Döblin and Arthur Schnitzler, for example. The grandfather of psychoanalysis Sigmund Freud, meanwhile, was also a talented writer; his case studies read like literary novellas. Fellow psychoanalyst Georg Groddeck (progenitor of the concept of the id) also wrote novels and plays alongside his medical reports.
The trend continued throughout the 20th century. Doctors who were interested in psychosomatic medicine often used metaphors or concepts from the theater in their research, says Witt. The West German post-war psychoanalyst Alexander Mitscherlich, for example, talked about the “Ausdrucksgebärde”, or “expressive gesture”. In the 1980s, New Zealand psy­cho­analyst Joyce McDougall wrote two major works entitled Theater of the Mind and Theater of the Body.

These borrowings from the theater are not restricted to depth psychology, however. The director of the Charité psychiatric clinic in East Berlin, Karl Leonhard, specialized in cognitive behavioral therapy. He too was influenced by the theater. For his concept of personality diagnostics, he drew on ideas from Konstantin Stanislavski’s acting theory. Witt laughs: Leonhard’s fascination with these talking bodies was so great that in his free time he, the clinic director, took photographs of the clinic matron in various affective poses in order to understand how mental expression in the body worked. All these – at times downright odd – lines of research further fueled Witt’s curiosity: Why do doctors use ideas from the arts and humanities to conceptualize their medical theories? That is one of the key questions that she hopes to answer in her habilitation.

Today patients with anxiety disorders, burn-out, chronic fatigue, dizziness or tinnitus may find themselves being treated in the psychosomatic department of a hospital or clinic. The body tells us when something is wrong. Sophie Witt reaches for a book written by another writer-doctor, Georg Büchner. In his 1836 satirical play Leonce and Lena, the character Leonce says languidly: “My life yawns at me like an enormous sheet of paper that I am supposed to cover with writing, but I can’t manage a single letter.” Experts today might diagnose alexithymia, a kind of emotional dyslexia, which was Leonce’s reaction to the strict bourgeois work ethic of the times – as if he had already sensed our modern high-performance society on the horizon. Witt returns the book to its place on the shelf, eager to get back to work. She has no shortage of words to fill the paper.