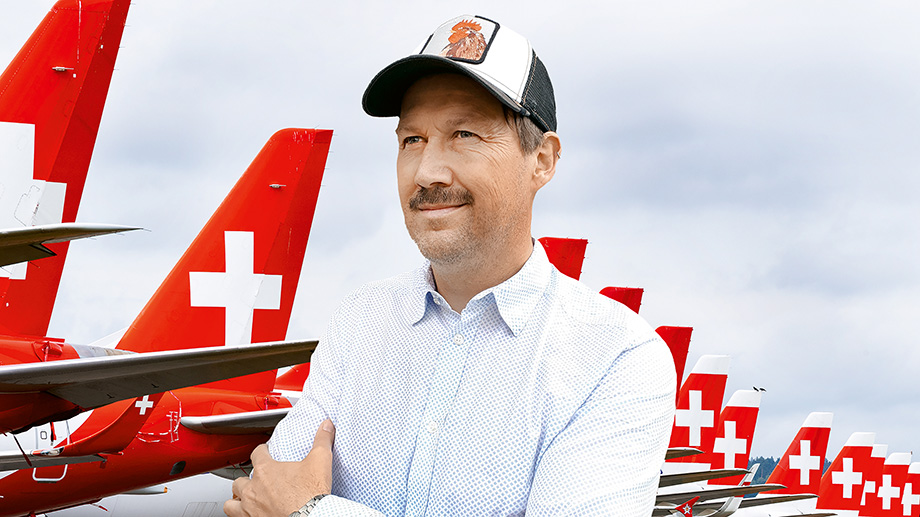 “To be credible, the university has to lead the way when it comes to sustainability”, says Glaciologist Michael Zemp. (Image: Frank Brüderli)

The ice is melting. Glaciers the world over are currently losing ice at four times the rate compared to the 1980s. “Our research object is literally melting away from beneath our feet,” says Michael Zemp. The glaciologist at UZH’s Department of Geography deals with the alarming facts of climate change on a daily basis. And yet, satellite images of Greenland, the Caucasus Mountains or the European Alps still upset him. “I get really emotional when I see that, for example, the Careser glacier in Italy will soon be completely gone.” A few specks of ice are all that remains of the once majestic glacier.

One of the main culprits of climate change and the retreat of glaciers is air travel, which has surged in the past few decades – with little care for the consequences. Moreover, the collective carbon footprint of scientists is quite substantial when compared to other professions. Some studies have suggested that academics fly 72 percent more frequently than non-academics. International conferences and face-to-face contacts with peers are important for a career in research. Junior researchers in particular should be given the opportunity to attend and hold talks at leading universities and conferences that are relevant for their respective fields.

According to the website Atmosfair, the yearly environmentally sound climate budget for one person is 2,300 kg of carbon dioxide. However, the carbon footprint of a researcher traveling from UZH to Harvard and back amounts to a staggering 3,250 kg of carbon dioxide. “Such a long-haul flight costs us 50 tonnes of glacier ice per passenger,” as Michael Zemp puts it more drastically. The glaciologist quit frequent-flying to international conferences a number of years ago. “It’s incredibly time-consuming and takes an unnecessary toll on the environment,” says the professor.

Regional instead of global meetings

Zemp has gained some experience in how members of the scientific community can avoid flying, for example thanks to his role as Director of the World Glacier Monitoring Service, which compiles and disseminates standardized data on glacier fluctuations. The global organization’s most recent annual meeting at the end of 2019 was staged as three regional meetings – in Europe, Asia and South America. “Previously we had brought all researchers together for a central meeting in Switzerland. By splitting the event up across three sites, all participants at this year’s conference had a significantly shorter journey and thus caused lower emissions.” According to the glaciologist’s calculations, this measure cut the amount of CO2 caused by the conference in half compared to previous events held in Zurich.

And there was another positive effect: “The smaller team sizes enabled us to focus more closely on specific regional issues, which turned out to be much more efficient.” It also became apparent that the researchers from South America were better able to contribute to the conference – be it because the regional meeting held in Spanish removed the language barrier or because of the absence of the often dominant European views. The three groups exchanged views virtually using videoconferencing, which required little organizational and technological effort. “It worked perfectly,” says the UZH professor.

For avid hiker Zemp, it has long been clear that the scientific community must change for good, especially when it comes to its members’ flying habits. A working group led by Zemp at the Department of Geography is recording the air miles of employees. The department aims to reduce its staff’s air travel by 25 percent until 2025, using the average number of kilometers traveled by air between 2017 and 2019 as a reference. “We don’t have to travel to be on site in every case,” says Zemp. “Our research group has extensive discussions about whose attendance at an international conference will have the greatest impact. As an added benefit, these discussions boost our team spirit and working culture. For example, by limiting myself to one intercontinental flight per year, I hand over responsibility to one of my employees. I gain time that I can use for other tasks, and the junior researcher gets an opportunity to appear before a wide audience of peers.”

Michael Zemp is very pleased that UZH’s Sustainability Team has issued recommendations on mobility and business travel (see UZH Journal 1/2020). “To be credible, the university has to lead the way when it comes to sustainability,” he says. While non-flyers are still in the minority among researchers at UZH, this could be about to change. During the coronavirus crisis, many people noticed that virtual meetings can be just as or even more productive – and are free to boot. Michael Zemp is hoping for a fundamental shift in our thinking, “by realizing what’s possible if we refrain from traveling.” We have more to gain than we think.