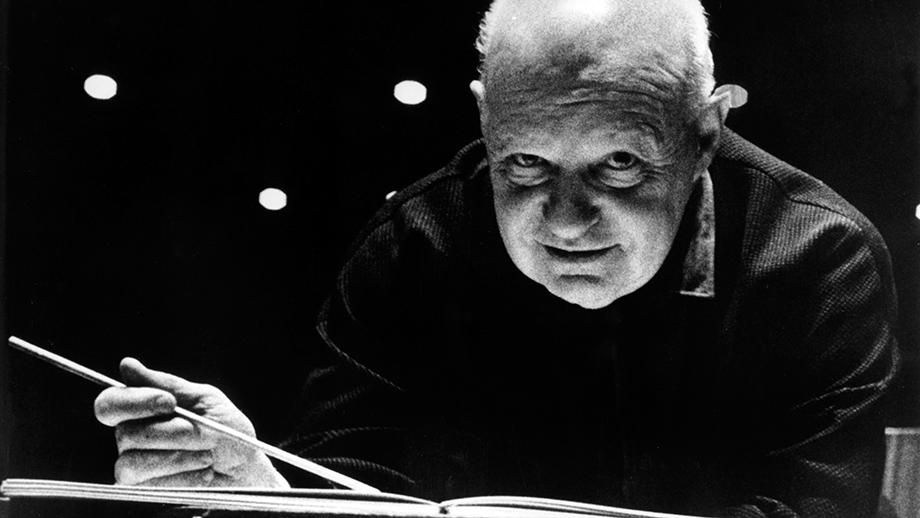 The hours when the composer Paul Hindemith, appointed professor at the UZH Department of Musicology in 1951, held his seminars must have been exciting ones. In his courses, music was not merely analyzed, but also practiced, sung and played. Many a student must have sweated with nerves when having to sightread and sing all kinds of complex musical works. However, Paul Hindemith was an eminent authority in 1950s Europe, so people would have been prepared to accept this level of stress to be able to study with the maestro.

Now, the maestro has returned to the premises on Florhofgasse – his spirit, at least, has come back to life: the Fondation Hindemith has donated the composer’s archives, extensive library, sheet music, scores, personal objects as well as private furniture from Villa La Chance in Blonay near Vevey, the composer’s retreat, to the Department of Musicology. When the department’s two directors, Inga Mai Groote and Laurenz Lütteken, hold meetings at his dining table, Hindemith’s portrait now gazes down upon them sternly from the wall.

According to Lütteken, Hindemith’s appointment as professor of musicology caused a sensation at the time. The coup had been engineered by the Germanist Emil Staiger and the Anglicist Heinrich Straumann. The intention was that an artist should reposition the subject, which had hitherto been without a professorship, and reconcile science with art. Indeed, Hindemith was no academic – he had never attended upper secondary school and had no school-leaving certificate, let alone a doctorate – and concentrated his teaching activities on composition. He was a highly talented, intelligent universal musician who burned with passion for his calling. At the same time, he was committed to becoming fully involved in his musicology professorship at the University of Zurich. Hindemith had perfect pitch and was able to play almost any instrument – apart from the harp.

Things that he took for granted could be very unsettling for his students. Andres Briner, biographer and former editor of the NZZ’s arts pages, for example, remembers his exam with the maestro as a purgatorial experience. “Although Hindemith knew […] that my pianistic skills were rudimentary, I had to sightread Mahler’s Kindertotenlieder while simultaneously analyzing them harmonically… Hindemith sang the vocal part in all manner of registers and repeatedly interrupted himself to cheer me on. While I played and he sang in falsetto, I was unable to analyze. He snarled at me, telling me to finally explain the harmonic context, occasionally shouted, ‘Faster!’, applauded my fragmented analysis, but then, with great impatience, started singing again while I tried to catch up with him on the piano.”

Nor did Hindemith’s practical approach to music-making stop with his university colleagues, who were expected to gather round the piano with the maestro when lectures were over and sing a few harmonically extremely complex madrigals by Gesualdo. You can vividly imagine these situations when you take a look at Hindemith’s grand piano, which now stands, half hidden under a red-and-gold damask cover beside his desk and an overflowing bookshelf on the ground floor of the Department of Musicology.

Hindemith’s music – like that of composers such as Benjamin Britten or Dimitri Shostakovich – was long perceived as being insufficiently avant-garde and not really belonging to the modern age, believes Laurenz Lütteken. This is probably due to Theodor W. Adorno’s disparaging judgement. The influential philosopher of music even went as far as denouncing Hindemith’s music as bourgeois. Hindemith did indeed follow his own path. For him, Arnold Schönberg’s 12-tone system was too rigid. “He wrote music that communicates well and remains comprehensible,” says Inga Mai Groote. His works are not atonal; the sounds are more or less dissonant and create surprisingly colorful harmonies. While using conventional musical techniques, Hindemith employed themes and melodies in creative and unexpected ways, taking up and reinterpreting traditional forms.

The professor of musicology, born into a working-class family in Hanau, Germany, in 1895, was encouraged, like his siblings, in his musical endeavors from an early age. He toured with his brother and sister as the celebrated Frankfurter Kindertrio (The Frankfurt Children’s Trio), performing in the houses of the local bourgeoisie. Later, at the Donaueschinger Kammermusiktage (Donaueschingen Chamber Music Festival), where the young Hindemith played as a violist in the legendary Amar Quartet, which was famous for its excellent interpretations of contemporary music, he had his breakthrough as a performer and composer with his String Quartet op. 16.

In the 1920s, Hindemith wrote expressionist music. He was interested in the emerging new media, composed for radio and film, as well as for the trautonium, a precursor of the synthesizer. In the course of the 1930s, he rose to prominence as a notable contemporary composer and continued to develop his clear, unsentimental, sober musical idiom.

In another room on the first floor of the Department of Musicology, Inga Mai Groote pulls score by dog-eared score, marked with annotations and marginalia, from the shelves. Only a fraction of Hindemith’s extensive oeuvre – such as the operas Cardillac or Mathis der Maler – is known to a wider audience, yet there is much more to be discovered. Groote notes that there has been renewed interest in the composer for some time now. This is not least thanks to the fine, continuously updated edition of his works published by Schott in collaboration with the Hindemith Institute in Frankfurt, where most of his autographs are stored.

We can surmise that there is such a scintillating personality behind the composer’s sober music when we browse his archives. Laurenz Lütteken piles up a selection of books: first editions, dedications and signatures from such figures as Gottfried Benn, Igor Stravinsky or Francis Poulenc. Hindemith must have had an enormous network. Among the books is a Fleischmann model railway. Who would have thought that the composer was a passionate railway enthusiast? Groote pulls out a special treasure from underneath the grand piano: a sailor’s trunk, containing railway carriages and pieces of terrain, lovingly constructed from wood and cork by the composer.

When Paul Hindemith and his wife Gertrude fled from the chaos of war in Europe and went into exile in the United States in 1940, they had to leave many of their possessions behind in storage. This led Hindemith to continue to indulge in his hobby in exile. Many trains and stations that he crafted bore the couple’s pet names. Frequently, among the highbrow literature, works of musical theory, philosophy, art history, travel books and works of fiction, caricature-like drawings that Hindemith drew on cards, sheet music or in books bring a smile to one’s lips.

A recurring motif is the lion – his wife’s star sign – which occasionally dances across entire scores. It is presumed that there was a sizeable collection of such animal figures at Villa La Chance in Blonay, where the couple lived after their exile in America until Hindemith’s untimely death in 1963. A few particularly attractive examples have found their way into the archives in Zurich.

Hindemith’s dual function as a musician and professor of musicology in Zurich ultimately became too much for him. In 1957, he opted for music, conducting and composing, and withdrew from his teaching position at the Department of Musicology. However, he remained on friendly terms with the University of Zurich for many years, as numerous postcard greetings testify.

Now that Hindemith has, so to speak, returned to the Department of Musicology, his holistic understanding of music and his vision of musicology as being united with musical practice will perhaps find a new lease of life. It is intended that the postponed opening of Hindemith’s archives will be (belatedly) celebrated next spring. Tabea Zimmermann has already agreed to perform his Viola Sonata. And who knows, it is perhaps conceivable that the department will be open for occasional concerts on site.

Six Chansons
Choral work (1939)
The Six Chansons (written for the La Chanson Valaisanne choir), settings of poems in French by Rainer Maria Rilke, reveal that Hindemith shared the poet’s affection for both the French language and the Canton of Valais.

Mathis der Maler
Symphony (1934)
It isn’t easy to make a selection from such a rich oeuvre. The Mathis Symphony, a serious, weighty piece, shows the composer on the path to understanding himself.

Cardillac
Opera (1926/1952)
Cardillac is a lugubrious work; the Zurich version also reveals how Hindemith had changed after emigrating.

Tuttifäntchen
(1922)
And the grotesque Christmas tale Tuttifäntchen – Hindemith “for beginners” – is fascinating for its almost incomprehensibly brilliant compositional technique.