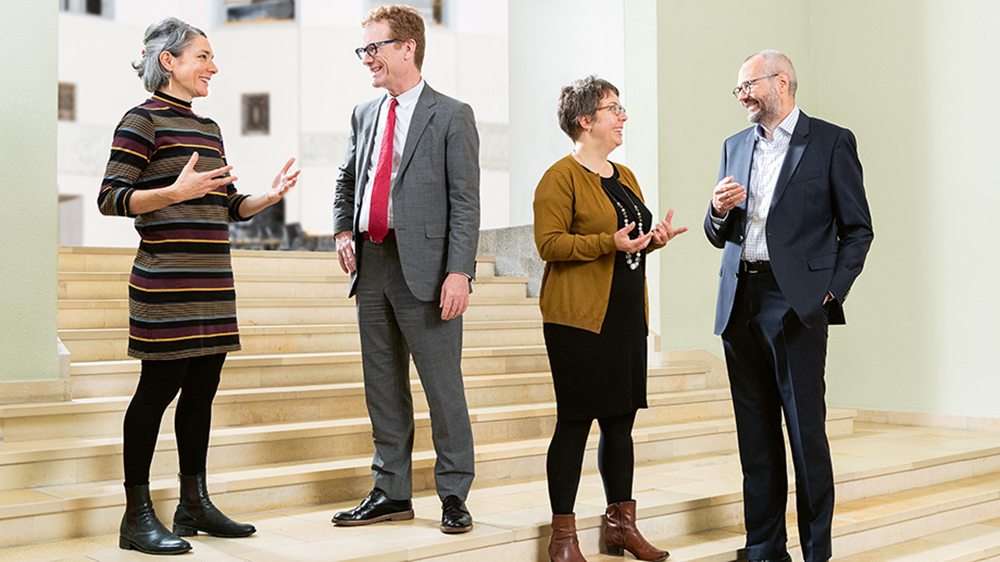 Stefanie Walter, you are a professor of political economics and have reduced your workload down to 80 percent. What are your experiences?

Stefanie Walter: I reduced my workload to 80 percent about three-and-a-half years ago to have more time to look after our two children. My experiences have been very good. Not only my family and I benefit from part-time work, but also my research. I have more time to think about scientific topics and come up with creative projects. It was crucial that we were able to use the money from the freed-up 20 percent to fund an external teaching assignment and increase employment for my postdocs. This way, I could hand over some of my duties. My current workload is certainly more than 80 percent, but no longer 130 percent, like it used to be.

Christian Schwarzenegger, what is the University of Zurich’s policy when it comes to part-time employment for professors and other leaders and managers?

Christian Schwarzenegger: A good work-life balance is very important to UZH. With our option to reduce employment levels, we’ve been offering flexible solutions for professors for several years now. At the same time, it goes without saying that excellent research and teaching are crucial, and part-time work arrangements need to be compatible with these goals and shouldn’t go below a certain threshold.

Jörg Kehl, you head up the Professorships Department and regularly deal with appointment negotiations. Part-time employment for professors is in principle available at UZH. What demand is there for such arrangements?

Jörg Kehl: To answer this question, you have to distinguish between the situation before and after someone is appointed professor. After they take up their role, we provide professors with a simple and straightforward way of reducing their level of employment, if they wish to do so, for example to make it easier to care for children or parents. And this option is regularly used, albeit not very often.

In contrast, ahead of an appointment, part-time work rarely gets mentioned during negotiations. Maybe candidates assume that asking about part-time arrangements could affect their chances – which is a shame, because that assumption is wrong.

Stefanie Walter: When I was appointed professor at the University of Zurich back in 2013, reduced employment didn’t enter into the equation, as it was clear to me that establishing a professorial chair required a great deal of time and energy. I only decided to reduce my workload some three years later, when I learned that this option existed.  I wanted to have more time to look after my two small children.

Miriam Ganzfried, you've examined the part-time work arrangements at UZH that we’re discussing here. Can you tell us about the feedback you’ve received from professors?

Miriam Ganzfried: The people we’ve spoken to have all given very positive feedback, and their experiences are similar to those of Stefanie Walter. All of them reduced their workload after being appointed, generally to 80 or 90 percent. They still work above-average hours, but much less than before. Many people welcome the relief provided by replacement positions, which can have a positive effect on research.

Are there any requests to reduce workloads by more than 20 percent?

Miriam Ganzfried: Most professors we’ve spoken to believe that it would be difficult to perform their role with less than 70 or 80 percent.

Stefanie Walter: I can confirm that. As a professor, you have certain tasks that cannot be reduced, such as supervising doctoral candidates or conducting research. There are also important internal duties at the department or faculty level that require your attention. And then there are the more administrative and representative tasks; while it is possible to reduce these, you should think twice about which tasks you want to unload and which you’d rather keep. You don’t have to get involved in each and every committee you’re asked to join and should say no from time to time. You have to find out where your contribution will be valuable, and where less so.

What makes UZH’s arrangements so attractive is that you can decide freely how to use the money freed up from your reduced salary. It can be invested in teaching or to cover other needs, so that your research won’t be affected. That’s a huge win. Two years after reducing my workload, for example, I was able to acquire a Consolidator Grant from the European Research Council.

Who is more likely to reduce their employment level, men or women?

Miriam Ganzfried: It’s fairly balanced, but there are gender-specific differences when it comes to the reasons for reducing employment. Women are more likely to reduce their workload for family reasons, while for men it’s often due to other commitments, such as political work.

How many people take up a non-full-time position?

Miriam Ganzfried: Not that many yet. At the Faculty of Arts and Social Sciences, for example, there were seven professors who worked part-time in 2019. I think this is mostly because the availability of part-time work arrangements and the positive experiences of those already working part-time aren’t that well known yet. But our project clearly shows the need for part-time arrangements. So it’s about spreading the word about these arrangements and raising awareness, for example among people with young children or aging parents, or people who have other commitments outside of university.

Christian Schwarzenegger: Keep in mind that we’re talking about part-time arrangements for professors, who hold roles that require top performances in research and teaching – such roles, as we’ve heard, are only suitable for part-time arrangements to a limited extent. The situation is completely different when it comes to UZH’s administrative and technical staff, where many people work part-time between 20 and 80 percent and where we’ve established co-leadership arrangements.

What about job sharing? Can new professorships with such arrangements be advertised at UZH?

Christian Schwarzenegger: Based on experiences at UZH and other universities, I have some doubts when it comes to job sharing arrangements. It’s difficult to be at the forefront of research when you’re only going at half speed. I know this from my experience as a member of the Executive Board of the University. There is simply not enough time to conduct cutting-edge research.

Miriam Ganzfried: Job sharing isn’t that simple for a number of reasons. In the end, it means that two people are tied to each other very closely, in terms of subject matter and organization, and this can easily result in conflict if the two people don’t get along. Reducing the level of employment is easier, as it only concerns one person. But I also know of examples where job sharing has worked out perfectly.

Christian Schwarzenegger: How often has it happened that a faculty has asked for a professorship with two 50-percent positions?

Jörg Kehl: Twice. In one case, the request was implemented with two 60-percent positions. The second case ultimately resulted in two full-time positions being created. But I’d like to emphasize that we’re open to this option if the faculties request it. The formal requirements are in place.

UZH would like to increase the share of female professors. To what extent do part-time arrangements also help remedy the imbalance of men and women at the level of professorships?

Stefanie Walter: Such arrangements help motivate women to seek top-level positions, and also men, who see that it is possible to combine a career and family life. It’s important that aspiring researchers know about the availability of part-time working arrangements. At our department, I regularly mention my family and talk about the topic with my postdocs. Of course, researchers are faced with certain constraints, there’s no denying that. But it’s important to talk about these issues and try to establish an environment that promotes solutions. There’s a lot of goodwill at the Faculty of Arts and Social Sciences for this.

Miriam Ganzfried: I also think that female role models are crucial, so that young female researchers see that it is possible to combine a career in academia and a family.

Christian Schwarzenegger: I’m confident that the share of female professors at UZH will increase significantly over the next few years. The requirements differ for each faculty and the pace at which changes occur isn’t the same either. But we’re in a process that is accelerating. When it comes to our professorial appointments, we also make a point of eliminating discriminatory biases against female candidates.

Jörg Kehl: It’s best to get in touch with the Professorships Department so that we can discuss how to proceed. The Executive Board of the University is responsible as the appointing body. All requests go through the official channels, through the heads of the departments, institutes and faculties, where the relevant measures need to be taken, for example when it comes to teaching. Besides these initial talks with us, there will also be meetings with the department heads and faculty deans. Finally, a request needs to be submitted along with a letter of support from the dean’s office to the President ad interim. Since the matter concerns employment law, the decisions must be made in writing.

Miriam Ganzfried: The professors we’ve spoken to have applauded the straightforward administrative process to reduce their employment levels. They greatly appreciated the professional support provided by the Professorships Department.

The University of Zurich provides UZH professors with the option of working part-time to promote equal opportunities and work-life balance. The benefits of these part-time arrangements for professors were examined as part of a CHESS project (“Neue Organisationsmodelle für Teilzeitführungsaufgaben an der UZH”) through a series of talks with people with experience of such arrangements, as well as with the Professorships Department. Overall, the UZH model can be considered best practice. In addition, the CHESS project aims to advance organizational models for part-time leadership duties at UZH. The goal is to develop these models in cooperation with interested parties taking into account their organizational scope for action. The project team supports interested university units, for example by researching suitable work arrangements or providing structured exchanges with other units at UZH. The CHESS project “Neue Organisationsmodelle für Teilzeitführungsaufgaben an der UZH” is part of UZH’s Gender Equality Action Plan 2017–20. (mg)