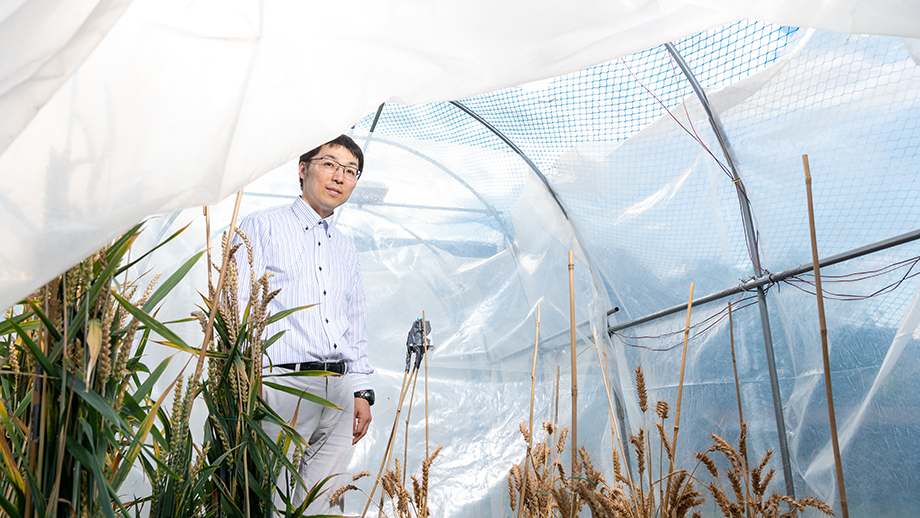 Kentaro Shimizu
Kentaro Shimizu: "If the climate changes, new species also emerge. Even so, the number of species that die is many times greater." (Image: Ursula Meisser)

"Konnichi wa.” Kentaro Shimizu greets a colleague who’s in the process of harvesting wheat. Then he releases a few clips and lifts the plastic of a small, transparent tent. A green, completely unspectacular herb sprouts from the ground. “It’s not a very good-looking plant,” admits Shimizu. “But I like it a lot.”

Called Arabidopsis kamchatica, it belongs to the rockcress genus. Shimizu discovered it 20 years ago while hiking in the Japanese mountains. It subsequently prompted him to travel to Siberia and Alaska. He gathered as many specimens as possible to investigate. Finally he took them with him to UZH, where he’s been doing research since 2006, latterly as professor of evolutionary biology. The rockcress grows less than 100 meters from his office in the Irchel Park’s research garden.

To any amateur gardener, the plant being researched by the 46-year-old professor in Zurich would look like a weed. Yet unspectacular-looking plants such as the rockcress, as well as alpine flowers and wheat, can provide important information that could help us master future challenges – for example information on how plants are responding to climate change, or on whether we’ll still have enough to eat when temperatures rise. Shimizu and his colleagues are doing fundamental research to answer such questions.

What fascinates Shimizu most is his favorite plant’s inner life: “Arabidopsis kamchatica has double genes.” To explain this he invites us into his office. In an empty corner of a whiteboard otherwise full of scribble, he draws what makes the plant so special. “Most organisms inherit one chromosome from each of their parents. For example us humans,” explains Kentaro Shimizu, as he sketches a number of curls and whorls. If different species interbreed it produces an androgyne that can’t reproduce. “Unless,” he says, as he begins a new drawing, “the plant inherits both chromosomes of both parents.” In this case, two different plants can merge to create a new species. If there’s an evolutionary advantage to this genetic mix, according to Darwin this new species will survive and spread. The rockcress emerged between around 64,000 and 145,000 years ago from the merger of two other plants. It’s one of those plants with double genetic information – a characteristic known in the jargon as polyploidy. But what’s the benefit of this excess of genetic information? Shimizu found the answer to this two years ago when he managed to sequence the rockcress’s genome. “If the environmental conditions change, polyploid plants are at an advantage,” he says.

So the more genes the better? No, he says, because when conditions are stable, having too much genetic baggage is a disadvantage. “Polyploid plants are good generalists, but bad specialists.” There are quite a few polyploid plants. But most new species disappear because they can’t assert themselves.

This isn’t what happened to Cardamine insueta. This alpine flower grows in the mountains of Switzerland, and is one of around 10 new species discovered so far in the last 150 years. “Most people think that evolution happens over a very long period of time,” says Kentaro Shimizu, showing us a flower with purple blossoms. “But this flower proves the opposite can be true.” Cardamine insueta is a textbook example of how plants can adapt to changes in the environment. This is because it’s possible to reconstruct precisely how and why it emerged. The flower grows only on the Urnerboden, the biggest alpine meadow in Switzerland, below the Klausen Pass. It emerged because humans felled the trees and started to farm the meadow. Cardamine insueta was discovered by the late Elias Landolt, a botanist. Shimizu and his fellow researchers finally succeeded in sequencing its genome. They showed that the flower is a cross between a plant from a moist environment and one from a dry habitat.

The age of mass extinction

The alpine flower from the Urnerboden proves that climate change doesn’t just cause species to die out, but that it also produces new ones. Even so, the number of species that die is many times greater. “The fact that an increasing number of polypoid species are emerging is a sign that we’re in an age of mass extinction,” explains Shimizu. Gene-rich plants, he says, also enjoyed a boom in earlier periods of mass extinction, for example around the time the dinosaurs disappeared.

Besides Shimizu’s favorite plant, something else is growing out there in the Irchel Park research garden: one of the world’s most important staple foodstuffs, wheat. A fellow Japanese researcher currently on a visit to Zurich is in the process of harvesting it. Are they going to try some culinary experiments? Shimizu laughs and clarifies: “Wheat is also a polyploid. We were recently able to sequence its genome.” Shimizu will shortly be publishing a study on this in the prestigious journal Nature.

There’s a good reason why the scientists are doing research on the cereal. Climate change is likely to reduce yields, which could lead to famine all over the world. “Unless,” says Shimizu, “we find a variety of wheat that yields a good enough harvest even at higher temperatures.” For this reason, scientists around the globe are working to analyze the strengths and weaknesses of various varieties of wheat. Shimizu is one of them, and responsible for the Japanese variety Norin 61. He believes it has particular potential, because “it’s a very robust variety that grows in both warm and cold environments.”

Some ears of wheat in the research garden are only separated from the open air by blue bird netting, while others grow in a transparent plastic tent. There it’s one or two degrees warmer to simulate global warming. If you stand for some time in the garden, from time to time you’ll hear a click. This comes from small cameras mounted on crescent-shaped poles. “They monitor the growth of the plants,” explains Shimizu. The images are subsequently analyzed on the computer with the help of intelligent software.

How does Norin 61 react to warmer temperatures? The first results, as yet provisional, are disconcerting: The plants in the slightly warmer tent seem to yield 30 percent less grain. “At first it looked as if the higher temperatures were helping,” says Shimizu. Initially the plants in the tent grew more quickly. But after that, they began to form ears and flowers too early. “They took the signals to mean that it was already spring.” Shimizu wants to repeat the experiment to check the findings.

The results are a warning about climate change. But for Shimizu, they’re also a reason to continue his research. They show that we’re probably going to have to breed a new variety of wheat to prevent climate change from also leading to famine. For this to happen will require more basic research along the lines of what Shimizu is doing. “There are thousands of things we still don’t know.” For example: Why are some varieties more resistant to warmer temperatures than others? The answer probably lies in the genes. With around 16 billion base pairs, five times as many as humans, wheat has plenty of them.

Along with rice and corn, wheat is one of the world’s staple foodstuffs, providing almost 20 percent of the calories and protein consumed by humans worldwide. What many people don’t know is that humans have done a lot to rewrite the cereal’s story.

Wheat was one of the first plants domesticated by humans. More than 10,000 years ago they were already cultivating the original wheat varieties, einkorn and emmer. We now know that emmer was the result of a natural, random cross of two sweet grasses. But it was only when people started to systematically breed wild emmer that it crossed with a wild grass. This resulted in common or soft wheat, the basis of our bread. Durum (hard) wheat, which we now use to make pasta, has its origins in emmer. But that also took a fair amount of breeding.

So without humans, we wouldn’t have our modern varieties of wheat for bread and pasta. “Many people believe that things are only healthy if they’re natural,” says Kentaro Shimizu. But the story of wheat, he says, shows that human influence is almost indistinguishable from natural processes. “People are also part of the ecosystem.”

Wheat has been systematically bred in the modern era as well. In the Green Revolution from the 1960s onward, high-performance varieties were created that multiplied yields and saved millions of people in developing countries from death by famine. So if scientists now plan to create a new variety of wheat that’s resistant to climate change, this is merely the continuation of a tradition going back thousands of years.