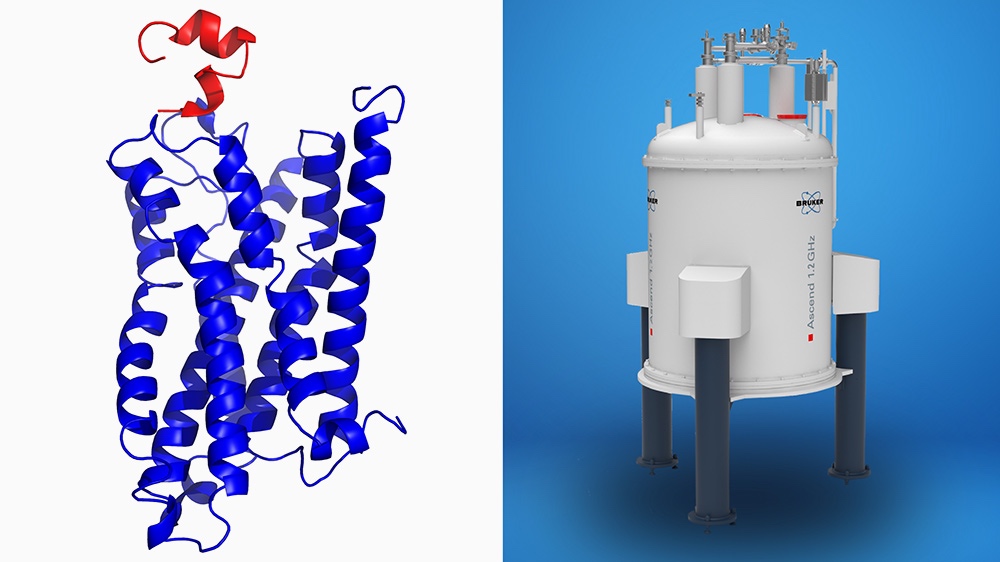 Struktur
Molecular structure of a membrane protein (GPCR, G-protein coupled receptor), which Oliver Zerbe will examine with the 1.2 GHz spectrometer (left). On the right the outwardly inconspicuous device. (Image: zVg)

Chemist Oliver Zerbe waxes lyrical when he talks about the new NMR spectrometer being acquired by UZH: “Absolutely cutting-edge technology, completely new, at the limits of what’s possible,” says the professor of structural biology at UZH’s Department of Chemistry. More precisely, it’s a 1.2-gigahertz NMR machine that has only been on the market since the beginning of this year. It’s so sophisticated that it’s enabling this field of NMR-based structural biology to move into new territory.

“With this spectrometer, we can analyze large molecules at unprecedented resolution,” explains Zerbe, saying that this type of machine is essential for anyone wanting to play in the top league of structural analysis worldwide. Zerbe emphasizes that Zurich research is definitely part of the global elite in this field. In the past, two Nobel Prizes have gone to Zurich scientists for their work on NMR technology: Richard Ernst and Kurt Wüthrich, both at ETH Zurich, in 1991 and 1992 respectively. Back then, Oliver Zerbe was a postdoc in Kurt Wüthrich’s lab. He joined UZH in 2004.

There are few areas of research as dependent on the development of technology as the structural analysis of biological molecules. This discipline is about breaking down the three-dimensional structure and shape of macromolecules to the level of individual atoms. Only this reconstruction gives insights into how vital molecules function and fulfill their tasks in the cells of the body.

An example is the membrane proteins that regulate the movement of small molecules in and out of the cell, and forward signals. Another example are the DNA and RNA molecules which contain genetic information. Often the way they function only becomes clear from an analysis of the structure. It also provides a basis for developing active agents that can be used to modulate cellular molecules, for example to treat cancer.

Since the 1980s, NMR spectroscopy has been one of the main tools used for this structural analysis. NMR, which stands for nuclear magnetic resonance, works on the basis of static magnetic fields that influence the nuclear spin or nuclear magnetic moment of hydrogen atoms. Electromagnetic pulses are used to manipulate the spin, with its relaxation to its original state then measured. The reaction of the hydrogen nucleus differs depending on the neighboring atoms – as if it could sense its surroundings. By measuring the distances between the hydrogen nuclei, it’s then possible to work out the structure of the molecule being analyzed.

A high-tech device of this sort comes at a price: around CHF 13.5 million. To purchase, set up, and operate the machine, UZH has joined forces with ETH Zurich and the University of Basel to create the Swiss Ultrahigh-Field Solution NMR Facility. The installation thus has national significance and is a part of the Swiss research infrastructure. The three universities will run two sites: The 1.2 GHz NMR spectrometer will be installed in the new chemistry building on the Irchel Campus that is currently being completed. There a special, vibration-free room is being built that will be suitable for NMR analysis.

A second, 800-MHz machine will be installed in the new building of the University of Basel’s Biozentrum Center for Molecular Life Sciences. The two Zurich institutions are each taking a stake of six million francs in the two NMR spectrometers, with the University of Basel investing four million. Researchers will be granted measurement time in accordance with their university’s respective share, and researchers from other universities and companies will be able to buy time. The decision to procure the two machines has been made, and they will be ordered shortly.

“I think it makes a lot of sense to join forces to acquire and operate this expensive infrastructure,” says Oliver Zerbe. In organizational terms, the 1.2-GHz machine will be operated as one of the UZH technology platforms, such as the Functional Genomics Center and the Nanobody Service Facility, designed to give researchers access to complex and expensive technologies. “The 1.2-GHz NMR spectrometer is an exceptionally large investment,” comments Thomas Trüb, who heads the department responsible for these strategic research platforms. Everyone involved agrees that this investment will pay off. Oliver Zerbe is already looking forward to exposing his protein samples to the fields of the new NMR spectrometer. If everything goes to plan, that should be in 2023.