Department of Medical Oncology and Hematology

Video of the immunotherapy

Genetically modified immune cells attack and destroy the leukemia and blood stem cells that have a receptor (CD117) on their surface (left), while all other blood cells that do not have the receptor are spared (right). 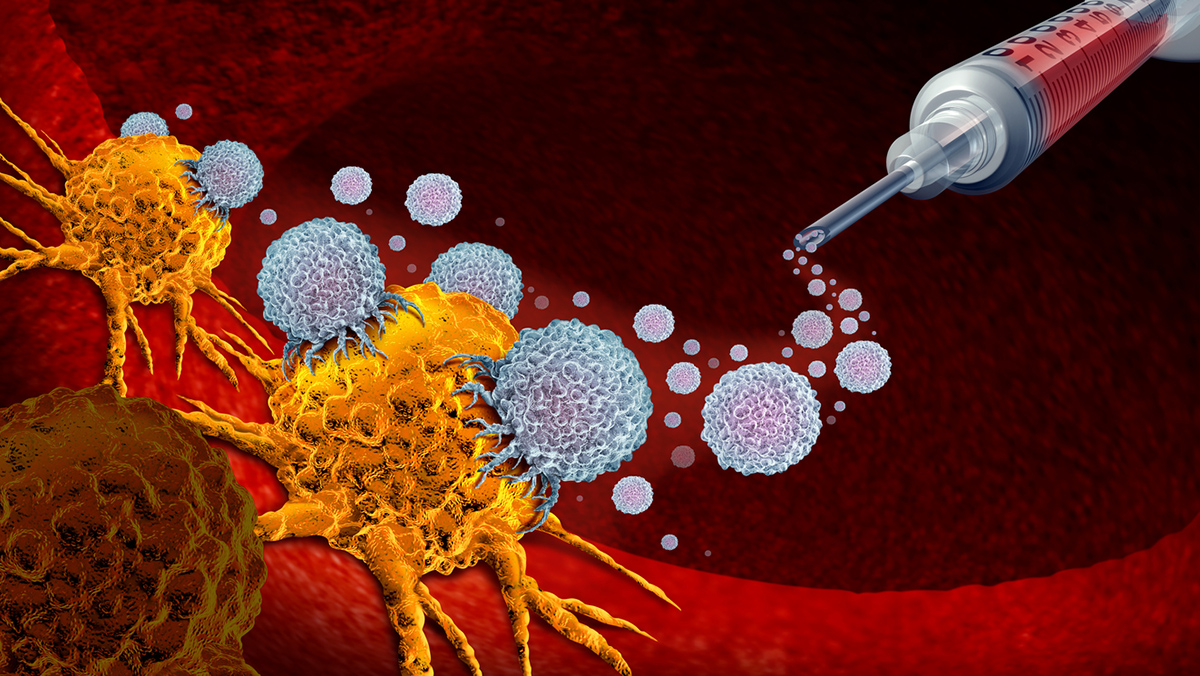 Acute myeloid leukemia (AML) is an aggressive cancer of the blood-forming system. It affects the hematopoietic stem cells, or blood stem cells, of various white blood cells and of the red blood cells and platelets. The leukemic stem cells propagate quickly, spread in the bone marrow and blood, and can attack other organs. Patients are usually treated with intensive chemotherapy and sometimes radiotherapy. After that they require a transplant of hematopoietic stem cells from a healthy donor. There are serious side effects associated with the treatment and it is therefore unsuitable for many patients.

A team of scientists and physicians from the University of Zurich (UZH), the University Hospital Zurich (USZ) and ETH Zurich have now managed to eliminate the leukemic and hematopoietic stem cells more selectively in an animal model. Chemotherapy and radiotherapy not only destroy the cancerous and hematopoietic stem cells, but affect all dividing cells – i.e. practically all tissues. “Compared to normal strategies, our method works very selectively, meaning that mature blood cells and other tissues are spared,” says study leader Markus Manz, professor of medicine at UZH and director of the Department of Medical Oncology and Hematology at USZ.

The researchers used the novel cell therapy called CAR-T. This therapy uses genetic modification to equip human immune cells with a receptor, thanks to which they can systematically dock onto only the leukemic stem cells and the healthy hematopoietic stem cells and destroy them. This creates space for the new donor cells to be transplanted. To avoid that the genetically modified immune cells then also attack the hematopoietic stem cells from the donor, the CAR-T cells are deactivated after they have done their work and before the transplant. This is done by using an antibody against a surface marker of the CAR-T cells. After the donor stem cell transplant, they take their place in the bone marrow and begin to rebuild the hematopoietic and immune system.

The results were achieved using cell cultures in the lab and in mice with human blood and cancer cells. But Markus Manz is confident that the treatment could also be effective in humans: “The principle works: It is possible to eliminate, with high precision, the leukemic and hematopoietic stem cells in a living organism.” Researchers are currently testing whether the method is only possible with CAR-T cells or also with simpler constructs – such as T-cell-activating antibodies. As soon as the pre-clinical work is completed, Manz wants to test the new immunotherapy in a clinical study with humans. “If our method also works with humans, it could replace chemotherapy with its serious side effects, which would be a great benefit for patients with acute myeloid leukemia or other hematopoietic stem cell diseases,” explains Manz.