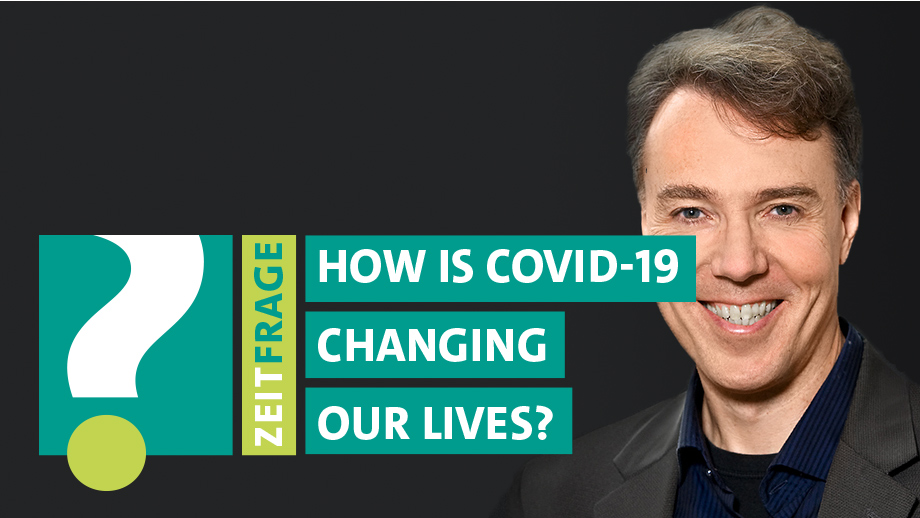 “Probably the happiest moment in epidemic history was 1976, when smallpox had been defeated and nobody had yet heard of HIV”, says the economist Joachim Voth. (Image: zVg)

Back in the 1980s William Hardy McNeill, historian and author of books such as Plagues and Peoples, wrote that history was a race between humans and germs. It’s still not clear who’s winning this struggle for life and death. Sometimes we’re a step ahead, sometimes the germs. The fact is that it’s not only people who have written history, but viruses and bacteria as well. It started a long time before Covid-19. “Pandemics are one of the biggest shocks that can hit an economy,” says economist and economic historian Joachim Voth. “They don’t happen very often, but when they do, they change life enormously.” Voth has studied the influence of plagues in history.

In the stranglehold of the plague

Over the last two thousand years there have repeatedly been phases of catastrophe where the germs got the upper hand, claiming countless lives, and apparently deciding the race in their favor. One pandemic, the Justinian plague (527-565), played a decisive role in the demise of the Roman Empire and the end of the ancient world. When around a thousand years later, in the sixteenth century, European explorers landed in America, they brought with them infectious diseases such as measles and smallpox that cost large parts of the native population their lives. For several centuries in medieval and early modern times, Europe was firmly in the grip of the Black Death. In its first wave from 1348 to 1352 the plague, which spread via trading routes from around the Crimea to western Europe, cut down around one third of the population of the time. Further waves followed, right into the eighteenth century, claiming millions of lives.

As sad as all this is, in the long term, Joachim Voth has discovered, the plague made Europe rich. The economist and economic historian has researched the upswing that took place worldwide in the late Middle Ages and early modern period. Nowhere was it more powerful than in Europe. One result was that while China was much more highly developed at the outset, over the centuries it became far outstripped by Europe. As paradoxical as it may sound, the launchpads for this upswing and growing prosperity were wars and epidemics such as the plague, which repeatedly led to drastic reductions in the population. At a time when, unlike today, all wealth came from the soil – in other words from agriculture – this also meant that more land, and more resources, were available per head of the surviving population.

According to Voth, this heralded a “golden age” in Europe for around a hundred years after the first wave of the plague. “Previously people had eaten a staple diet of barley gruel and porridge. Now they had roast beef, cheese and plenty of beer.” Growing prosperity resulted in greater demand for consumer goods, stimulating production, especially in towns and cities. But it also filled the coffers of the ruling classes in Europe, fueled their hunger for power, and increased their appetite for war.

In a politically fragmented Europe, a patchwork of principalities and kingdoms – the polar opposite of China, which was united and much more peaceful as a result – violent conflict was the order of the day. This frequent conflict also helped the European economy to develop more quickly than China’s. “In a Malthusian world in which prosperity is always a function of the relationship between land and labor, war is also good news because it increases the death rate,” says Joachim Voth. Epidemics and wars thus ensured that despite fluctuations, incomes in Europe never fell back to the level of before the first wave of the plague.

Medieval Europe was powerless in the face of this first wave. With the germs spreading incredibly rapidly and unopposed, the results were catastrophic. The pandemic cost an estimated 25 million people their lives. However, as they gained more experience, the societies of the early modern era learned to deal with the Black Death more effectively and drive it back, long before the pathogen had been discovered and isolated. Even back then, the magic formula was quarantine. Cites were locked down, people were confined to their homes, and places where people with the plague lived were marked with crosses. “At the time of the plague, every ship mooring at a Mediterranean port was put in quarantine. The Habsburg Empire closed its Balkan border,” explains Voth. “As it’s doing now, Europe sealed itself off from the rest of the world.”

This isolation was evident at the port of Marseilles in 1720 when a cargo vessel that failed to keep to the quarantine rules brought the Black Death to the city. Germs often spread along trading routes. To contain the epidemic, at the behest of the French king and the pope a plague wall was built in Provence. It was more than two meters high and guarded by armed soldiers in watchtowers. Anyone trying to climb over the wall was prevented from doing so by force. Even though some individuals managed to escape, it was possible to contain the plague. While around hundred thousand people in and around Marseille died despite this drastic measure, the wall prevented the disease from again spreading all over Europe.

Next pandemic sure to come

Now, three hundred years on, our options for controlling pandemics aren’t that much better than in the 18th century. Even today, the most effective means are social distancing and quarantine. “Three hundred years ago an absolutist king saved Europe from the Black Death by building a wall,” says Joachim Voth. “Even now we could see something similar in connection with the coronavirus pandemic.” As he explains, we don’t have to build walls of stone to stop the spread of the pathogen. But we could build a virtual plague wall with the help of digital contact tracing to share location and health data. South Korea and Taiwan have shown how it’s done. These countries are using mass testing, notifying citizens if they have been in contact with infected people.

The coronavirus pandemic might only be the start. The race between humans and germs has picked up speed in recent decades. “Sooner or later we’ll get to grips with the coronavirus,” says a confident Joachim Voth,” but it’s very possible that in the future we’ll be confronted repeatedly with pandemics, possibly with even more dangerous pathogens than the present one.” Global mobility has increased the frequency of epidemics. They used to break out only every hundred years; now it’s every five to ten. “Probably the happiest moment in epidemic history was 1976, when smallpox had been defeated and nobody had yet heard of HIV,” says Voth. At that point we seemed to have decided the race in our favor. But as we now know, that was an illusion.

Over the centuries, Europe learned how to effectively control the plague, for example with plague walls. And even back in the eighteenth century the magic formula was social distancing. As long as there’s no vaccine against the coronavirus, this still applies. Unlike then, though, we can now use digital contact tracing to build virtual plague walls.