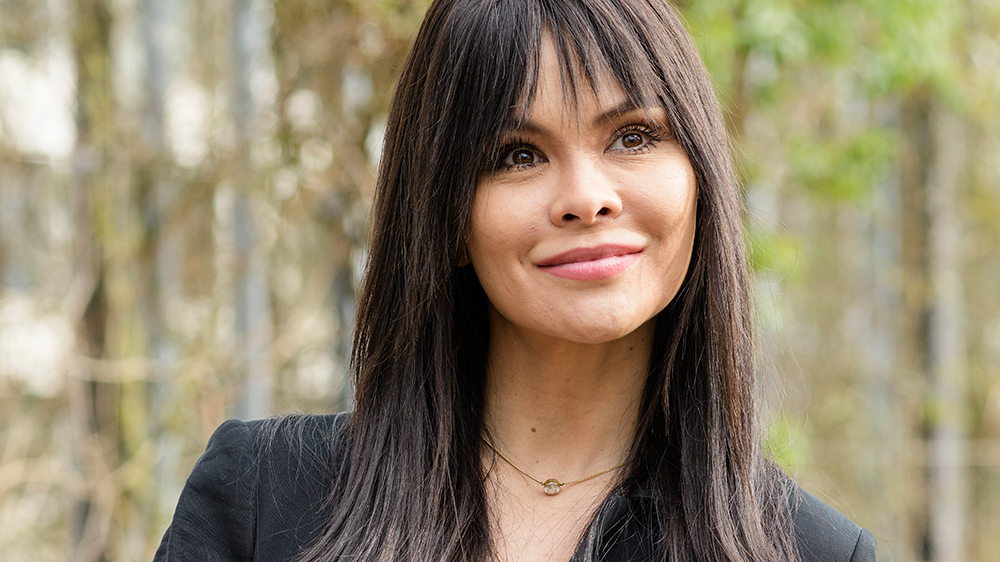 Infinite worlds, a surging sea of stars, planets, colorful galaxies and glowing clouds all pass before your eyes. Weightless and unassisted, your body soars through the end­less expanses of space. An indescribable feeling! But for now, it’s back to reality. I’m meeting with Jasmine Ho, doctoral student in the Department of Cognitive Neuro­psy­cho­logy. When asked if she sometimes plays computer games, she shakes her head and laughs. She would have access to all the necessary equipment: a virtual reality headset, software, a computer, a reclining chair. We’re not at a gamers’ meetup, how­ever, but in a laboratory at the UZH Department of Psychology, where electrode nets for measuring brain waves are hanging from the walls. Jasmine Ho is researching how virtual reality – interactive, artificial, computer-generated worlds – impacts cogni­tive processes and how it can be used for therapeutic purposes. She was first introduced to virtual reality by a friend from the film industry. After being suited up with the VR goggles, she flew through a simulation of outer space. Ho enjoyed the expe­ri­ence – and was surprised by just how realistic it felt. She also thought that the technology’s unprecedented possibilities for creating artificial worlds and using the body as an avatar could be useful in a clinical setting. Ho is currently conducting studies in which she immerses test subjects in virtual environments, holds interviews with them and measures their brain activity.

From entertainer to scientist

Jasmine Ho’s path to the research lab was not always so clear-cut: She could have easily ended up on the big screen instead. When she was younger, she went to the United States to work in the film industry, and as a child she had acting roles in short movies and performed on RTL’s Mini Playback Show. She switches between Swiss German and smooth American English, a reflection of her bicultural upbringing on the shores of Lake Lucerne as the child of a Chinese-American father and a Swiss mother. As a young woman, she left her home in rural Switzerland and headed to the US – her other home country. In Los Angeles, Ho felt like she was in the right place, but her film industry ambitions didn’t last long. Instead she preferred studying psychology at UCLA, where she ended up in her chosen field of cognitive neuroscience. When her friend popped up with a virtual reality headset, it triggered her researcher’s instinct. The medical field has actually been using the benefits for virtual reality for some time now – to train doctors and medical students, for example, or to treat phobias such as arachnophobia, fear of heights and fear of flying. Some hospitals use virtual reality technology as a method for reducing pain. For instance, when burn victims have their bandages changed, they can be distracted from the excruciating procedure by playing a game set in a virtual world of snow and ice. The effect can be so powerful that pati­ents don’t even realize when the bandage change is over.

Jasmine Ho put out feelers for interesting research groups and ended up back in Switzerland at the University of Zurich’s Department of Psychology, where Bigna Lenggenhager’s team investigates issues of cognitive neuropsychology with a focus on the body, self and plasticity. Ho joined a study with test subjects suffering from body integrity disorder (BID). People with this rare identity disorder are preoccupied with removing healthy limbs which they don’t perceive as belonging to their body. They suffer from a mismatch between their appearance and their mental body map. This condition that can lead to dangerous self-amputations or suicide. The study creates a lab-based virtual reality setting for the BID patients in which they are assigned avatars with bodies that have their desired amputation. Ho and her team use electro­ence­pha­lo­graphy (EEG) to measure the subjects’ brain activity and observe what neuro­lo­gical events take place during the virtual embodiment simulation. For com­pa­rison, the study also involves people with amputations. Researchers are looking into whether their perception of phantom pain can be influenced with VR technology.

Ho is fas­ci­nated by how powerfully VR technology can shape people’s perception of their bodies. In one study, she investigated whether virtual avatars can create a pla&­ce­bo effect. Pain treatment is one area in which there is a great need for alter­na­tives to medication – as shown by the recent wave of addiction problems in the US. Ho’s experiment showed for the first time that physically administering a placebo isn’t necessary to create a placebo effect. She was able to demonstrate that administering a placebo to an avatar – a virtual body in a virtual environment – was enough to bring about pain relief. In the experiment, test subjects were given a glove and told that it was made of protective high-tech material that would shield them from heat pain on their arm. Ho conducted the experiment in three stages – reality, extended reality and virtual reality. In the first stage, the subjects actually wore the glove in real life while having the heat pain sensation applied to them. In the ex­tend­ed reality stage, they viewed their real bodies through VR goggles – but while wearing a virtual glove. Finally, in the virtual reality phase, they were completely immersed in an artificial world where their bodies were replaced by a virtual avatar wearing a virtual glove. All the subjects knew from the beginning that the virtual glove was merely a placebo. Astonishingly, the glove was able to alleviate pain in all three stages of the experiment.

Jasmin Ho sits upright on her office chair and nods: Yes, virtual environments and virtual embodiment have a strong influence on our perception. “Feelings of body perception are surprisingly easy to change,” she says. “After just a few minutes in an artificial world, our brain adapts to the illusion.” At the beginning of a VR session, once test subjects are wearing a headset, they are asked to move a leg. Sensors transmit this motion to the avatar so that it moves in the same way. By this point at the latest, the test subjects perceive the avatar as their own body. Avatars like these that can be created at will make it easy to slip into another skin. “Men can experience themselves as women and vice versa. You can see yourself as a person of a different race or experience yourself via the body of an elderly person,” says Jasmine Ho. She men­ti­ons one study by the University of Stanford that investigated empathetic be­ha­viors and social interaction using virtual reality – and reported positive findings. Researchers observed that the experience of changing perspectives was able to dis­mantle pre­ju­dices and negative attitudes toward other social groups, at least in the short term.

Ho is focusing her research on people suffering from chronic pain. It is known that these pati­ents often have a skewed perce­ption of their body. They expe­ri­ence an aching arm, for instance, as heavy, warm, red hot and enlarged. Ho wants to create a platform that makes different avatars available so that people can change their body perception for the better: for example, by perceiving their aching arm as more flexible. However, she knows that basic research alone isn’t enough to achieve this goal. She wants to translate her findings into practical clinical applications and is already preparing to found a start-up. Her idea of using virtual embodiment technology for health care and pain management helped her win the UZH Digital Entrepreneurship Bootcamp. Now, the focus is on finding sponsors and getting the project off the ground. With such a frantic pace of research activity, how does Ho manage to relax? She shrugs, saying that she enjoys exploring the world (the real one), taking trips, going on hikes and walks, and from time to time daydreaming about the vast expanses of America. But she could just put on her VR goggles and already be there, right? Jasmin Ho smiles. She doesn’t need to: It’s quite possible that the United States is the perfect big market for her start-up. A perfect opportunity to fly over to her second home – but without the VR goggles.