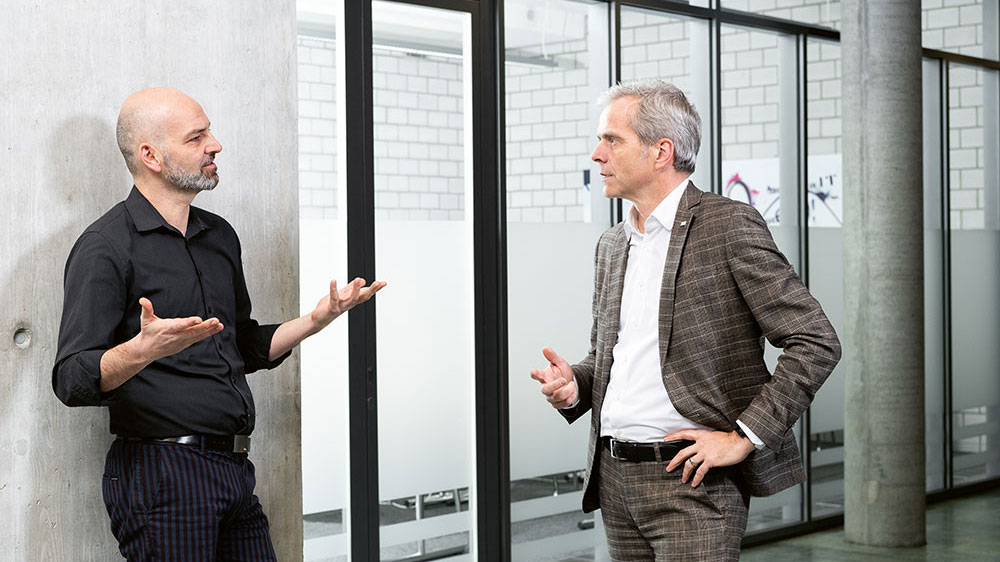 The UZH Journal has just turned 50. Since its launch as uni70, it has been aimed at members of the University of Zurich. How important is internal communication within higher education institutions today?

Jürg Dinner: Very! Much more important than it used to be, in fact. People now want to know about the organization that they are a part of. They question things more. In short, they demand a greater sense of purpose and more transparency. Aside from that, we are a heterogeneous organization. Michael Hengartner, the former president, once said that we were more like an umbrella organization than a company. So it’s even more important for the Executive Board to communicate with university members.
Mike S. Schäfer: Universities have grown and become more diverse in recent years. Here in Switzerland, they have become more politically independent since the 1990s, and are now more autonomous and able to define their own strategies. For that to work, they also need to be able to convey internally where they are headed, and why it makes sense and is important. This is the only way to get such a large organization on board.

How have internal communication and in particular the flow of information changed?

Jürg Dinner: The flow of information has changed drastically, but then so has the media landscape. Information used to be circulated in a one-way manner via noticeboards. These days, with social media, people expect interaction and want answers to their questions. It’s no longer about top-down communication.
Now it’s all about dialogue. What’s more, communication has become much more fast-paced. In the past, if you attended a conference, you’d have a few days to write a report on it, which would then be published. These days, news from the conference is reported live via social media. The people interested in that conference already know a lot about it – they are not waiting for a report that comes in a few days later. It is important to identify the right channel for each target group.

Which channels does UZH use to communicate with its staff?

Jürg Dinner: The website is our most important communication tool. Certain information is simply made available on the internet, for example we now publish short summaries of meetings of the University’s Executive Board. We also produce e-mail newsletters: UZH Weekly, which provides a weekly round-up of what’s been happening at the University and which events are taking place in the week ahead. And to supplement the UZH Journal, we have just launched UZH Inside. This e-mail newsletter is aimed exclusively at UZH staff and is published six times a year. It summarizes the most important news, for example on the Library of the Future or the new university library. And of course we also have the UZH app. Anyone can download this to view their schedule or read the news, check the cafeteria menus, or access exam results.

You mentioned that internal university communication now has to perform very different tasks. What are they?

Mike S. Schäfer: Higher education institutions are increasingly viewing communication as a management tool. President’s offices and dean’s offices communicate with their internal target groups to provide information and to get them to support their respective causes. We also see this at a structural level: At UZH, for example, Head of Communications Jürg Dinner attends the meetings of the University’s Executive Board. And this is the case at many other universities, too. Heads of communications now take part in management discussions and decisions as strategic advisors.
Jürg Dinner: The main task of higher education communication is still to provide information. But it is also important that people identify with their university. Many staff primarily feel they belong to an institute or faculty – and only secondarily to the University of Zurich. You see this, for example, on the research websites of a number of UZH professors. Sometimes it’s difficult to tell at which university they work. We’re currently working on a web relaunch, which aims to simplify our website and make it more attractive.
Mike S. Schäfer: The lack of identification with the University as a whole is to do with the fact that academics constantly have to wear several hats. Take me, for example – I am a communication scientist. Within that field, my specialization is science communication. I’m a member of the Department of Communication and Media Research, the Faculty of Arts and Social Sciences, and the University of Zurich. What university communication increasingly tries to do is to make me prioritize one of these identities – namely that I’m first and foremost a member of UZH.

Is this also about external branding – treating the university as a brand, as it were?

Mike S. Schäfer: Definitely. Many stakeholders consider universities from the outside as single entities. And in rankings, which are viewed by policymakers and society as an indicator of university quality, they are compared with each other as single entities. Irrespective of the fact that rankings are a complicated and in many ways problematic measurement, they do prompt universities to raise their profiles as single entities – so as UZH, for example.
Jürg Dinner: Competition used to be mainly between researchers in their respective fields, but now it is also to be found between institutions.

Let’s stay on the topic of external communication, but move on to university publications. What role do they play within the media landscape today?

Mike S. Schäfer: In the science communication landscape, significant shifts are taking place. Media companies’ cost-cutting measures are hitting science journalism particularly hard, as resources are being more heavily cut in these departments than elsewhere. Meanwhile, university communications departments have been expanded, and become more professional. This has led to a shift in the balance of power between university communication and science journalism.
In my view, we need to take a critical look at this: while there’s nothing wrong with universities professionally communicating their interests, positions and results,  we need a counterbalance – either traditional journalism or another body – that is responsible for providing this critical external perspective.
Jürg Dinner: That’s undoubtedly true.

So higher education communication is competing with science journalism?

Mike S. Schäfer: I often hear science journalists complaining that universities are taking the bread out of their mouths by producing such professional work and products that they have become rivals. University communications departments now sometimes deliver such good PR that the texts are used by the media. My research group analyzed this: using automated text comparison, we collated all UZH press releases from the past 20 years with Swiss media coverage over the same period. And we found that text overlaps have increased significantly. The media are picking up more from PR, which in a sense is down to the effective communication efforts of higher education institutions.
Jürg Dinner: Nowadays, science communication takes place in various sections of the media. On the one hand, we have the science sections of daily newspapers, which often report on the natural sciences – for example on the back page of the Tages-Anzeiger. We also have a second form of science communication: Experts who impart their knowledge on topical issues. For example, when historians, sociologists and legal scholars comment on social developments. In addition, reports on UZH as an institution may feature in the local section of the newspaper. So information from UZH is not restricted to the science section.
Mike S. Schäfer: That’s true. In the Swiss media the most prominent researchers are not from the natural sciences, but from social and political science. They analyze the results of the latest election or vote in the politics or business sections, for example, or explain the impact of immigration on Switzerland.
Jürg Dinner: We keep a database of experts and we specifically look for experts on current issues. This is particularly extreme in Nobel Prize week, when we sit down with members of relevant departments to identify researchers who can comment on the prizewinners. We then put interested media in touch with these experts directly. But journalists also contact experts of their own accord, and this is something we welcome and support. We’re really grateful that so many researchers take this task seriously and pass their knowledge on to society, which after all provides a significant chunk of our funding.

Have society’s and policymakers’ expectations of universities changed?

Mike S. Schäfer: The Science Barometer Switzerland, which we have been running for a number of years, shows that trust in science and in scientists at Switzerland’s higher education institutions in particular, is relatively high. But people still increasingly want to know what exactly they do, what the point is and whether it’s really necessary.
Jürg Dinner: I also think that society now expects greater transparency. Credibility is very important these days. It’s the greatest asset of all.

How can credibility and trust be established in science and academia?

Mike S. Schäfer: There is no silver bullet for building trust. A group of researchers from Münster showed that trust in science is based on three pillars. First, expertise: we have to accept that scientists know about their respective research fields. Second, integrity: are they open and honest? Third, a focus on the common good: can we accept that they not only act in their own interests, but that they also consider the public good? To build and maintain trust, it is useful to place greater emphasis on one or other of these, depending on the target group.
Jürg Dinner: In general, it’s important not to oversell. Journalists in particular are very susceptible to this. If I keep saying this is the best, this is important and this is a breakthrough – and then it turns out not to be – that affects our credibility. Clearly, when a press release comes in from UZH, it should carry weight. Having said that, it’s not possible to report on everything. Using appropriate channels is crucial here, too, e.g. community communication, which we are trying to support and boost. We can, for instance, retweet a research finding via the official UZH channel.

So is public dialogue part of the remit of higher education communication?

Jürg Dinner: Participatory formats are on the increase: we run Scientifica – Zurich’s science fair – every two years. We also hold the Talk im Turm panel discussions, where we discuss the main featured topic from the latest UZH Magazin. Since the year before last, we have a Citizen Science Center here at UZH. And through social media, we engage directly with the public. What’s more, we have countless events happening every evening, from adult education classes to major public events with internationally renowned researchers. Not to mention the exhibitions at the University’s museums. But the Communications Office doesn’t do all this alone; the individual faculties and departments/institutes also organize events. So actually, the whole University is communicating!