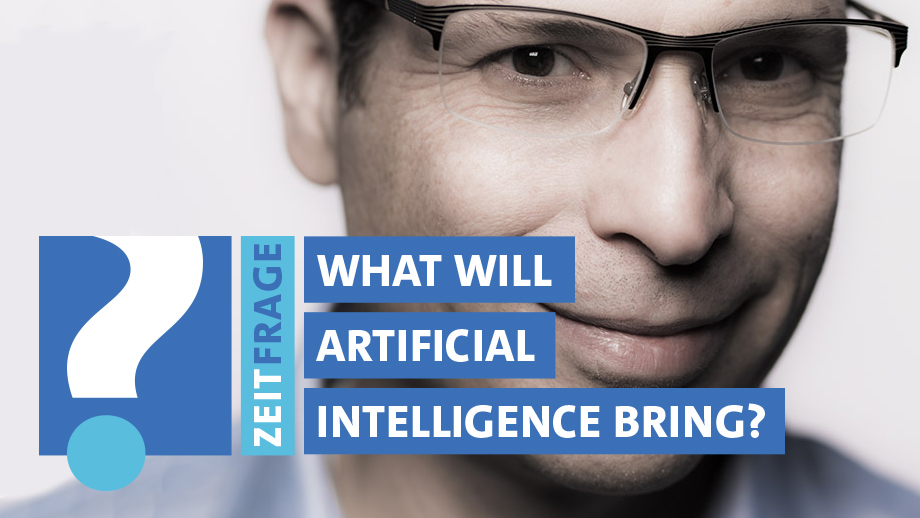 Abraham Bernstein, how will AI change the way we work?

Abraham Bernstein: We’re experiencing a new wave of automation. In the industrial revolution, mechanical work was taken over by machines. Now it’s cognitive tasks such as looking through applications, checking bills or analyzing pictures. In other words, we’re now seeing the automation of office work we used to need our head for. This is also changing the work done by the people who use these digital tools. Just as, for example, the introduction of the circular saw transformed the work of carpenters, algorithms are now transforming office routines because we’re delegating certain tasks to machines.

Isn’t that putting it a bit mildly? Won’t we be redundant once algorithms are doing office work?

Bernstein: Why should we be made redundant? Work has never been static. Around 1800, most of the workers in Switzerland were in farming. These days it’s only a tiny percentage. Another example: More than half of Swiss people who have done an apprenticeship no longer work in the trade or profession they learned. Put differently, we employees are constantly adapting to changing circumstances.

Bernstein: I think we have to stop overdramatizing the whole thing. There are two major theories of how digitalization is changing the world of work. One says that new techno­logies are taking over certain things, changing our work and shifting it into new areas. In other words, we don’t have less work, but different kinds of work. According to the second, dystopian theory, machines will be taking over all our work, leaving us without a job. Of course that stokes fears.

Bernstein: As an IT person, I’m optimistic. Within the foreseeable future, certainly a lot of the things we now do will be done by machines. But we humans are creative and adaptable, and there will be other work for us to do. From my point of view the ques­tion to ask is what areas we’ll continue to develop in, and what collaboration with AI will look like in the future.

How will the division of labor with machines change the way we work?

Bernstein: We’ll increasingly leave routine tasks to machines, giving us more time to spend on other things. Looking at the university environment, I think we can assume that the dissemination of facts will be increasingly automated, for example via e-learning platforms. This will give us more time for reflection and discussion in lectures and seminars. This means that universities will return to what they once were: places where people discussed and critically engaged with the material.

What’s your prediction for the future?

Bernstein: In the long term, every wave of automation has led to more, but simply different work. There’s a study by the Leibniz Center for European Economic Research in Mannheim predicting that in Germany, digitalization will result in more rather than fewer jobs. Presumably that also applies to Switzerland. Above all we have to think about the transition to the future world of employment.

Do you have any ideas?

Bernstein: In our research, we’re working on organizing complex tasks in such a way that they can also be handled by less qualified people. We’re doing this by combining human and artificial intelligence. For example, in one study we considered how statis­tical work could be done by people who aren’t statisticians.

How can these people be involved in highly complex analysis?

Bernstein: That’s an interesting approach. Until now we’ve tended to assume that the workforce will be split in two. On the one hand, there will be highly qualified people who’ll have interesting and well-paid work in this brave new digital world. And on the other, there will be those who can’t keep up, who become superfluous to requirements or can only get badly-paid jobs. Now you’re suggesting a third way: Adapting work pro­cesses in such a way that they can be handled by less qualified people.

Will that solve our problems?

Bernstein: You’d have to ask an economist. What I’d like to do is develop techno­logies that empower people. We should be able to do exciting work with the help of machines. Digitalization is changing the organization and division of work; we now have a new co-worker – the machine. This co-worker has skills I don’t have, and together we can do things that I can’t do on my own.

What can machines do better than us?

Bernstein: They have infinite patience and the ability to pro­cess huge volumes of data and see structures in it. This means they’re very good and reliable when it comes to recognizing and comparing patterns, for example examining and interpreting X-ray images. But if the machine isn’t sure, it’s still humans who decide.

What can humans contribute to this collaboration with machines?

Bernstein: Humans have a certain amount of creativity that you can’t yet find in machines – although some of my colleagues are saying it’s only a matter of time before machines become creative as well. We shall see. There are already bots that write newspaper articles, for example by analyzing business reports. Bloomberg and other companies use tools of this sort. In direct interaction with other humans, however, we still have clear advantages, for example when it comes to building empathetic relationships.

But even there there’s work being done, for example making phone bots that imitate the human voice.

Bernstein: In areas such as straightforward call center work, there might well be a tussle between humans and machines. But at the moment, people definitely have the edge when it comes to interpersonal interactions.

Where do you see the big opportunities in the use of AI?

Bernstein: We’ve already talked about some of the areas; reduction in the amount of routine work, more varied work, maybe the chance for people to develop in areas supported by machines, or to learn with the help of machines. There I see enormous possibilities.

Do people have to get fitter to be able to keep up with machines? Or can it also work the other way around, as you’ve suggested, with machines giving humans a hand?

Bernstein: People will definitely have to get up to speed. It’s a lot like mental arith­metic. Even with calculators, people still have to be able to do sums in their head, just not to ten decimal points. We have to ask ourselves which of our skills are no longer so relevant, and which skills will be more relevant. And then we’ll have to adapt our education and training accordingly. Now we have to find out how AI will change the work environment and how we can respond.

One fear associated with the new digital jobs is that a new, badly paid, poorly qualified, and vulnerable proletariat could emerge.

Bernstein: This risk can’t simply be dismissed. It used to be factory workers; now it’s the people who prepare material for algorithms. The point is that if you do work that anyone anywhere in the world can do, the chances are that this work won’t be well paid by the standards of this country. This applies both in the digital industry and in the rest of the world of employment. An important aspect of the problem is that many people work on an informal, unregulated basis, for example as freelancers.

How can these people be protected?

Bernstein: It’s not clear. These are the discussions we’re having with Uber and other digital platforms. It’s one of the risks of new technology that new labor markets emerge for which there aren’t any rules yet. This will have to change; and it will change. On the other hand, we can only regulate things we’re aware of, which means that regulation is lagging somewhat behind the latest developments. It’s precisely this kind of question regarding changes in the employment market that the Swiss National Science Foundation now wants to address with NRP 77, the National Research Program on digital transformation.

Alexander Brungs commented on 22 May 2020, 20:59 Moments vs. persons "But at the moment, people definitely have the edge when it comes to interpersonal interactions." My guess: It won't be a matter of moments, but a matter of being a person