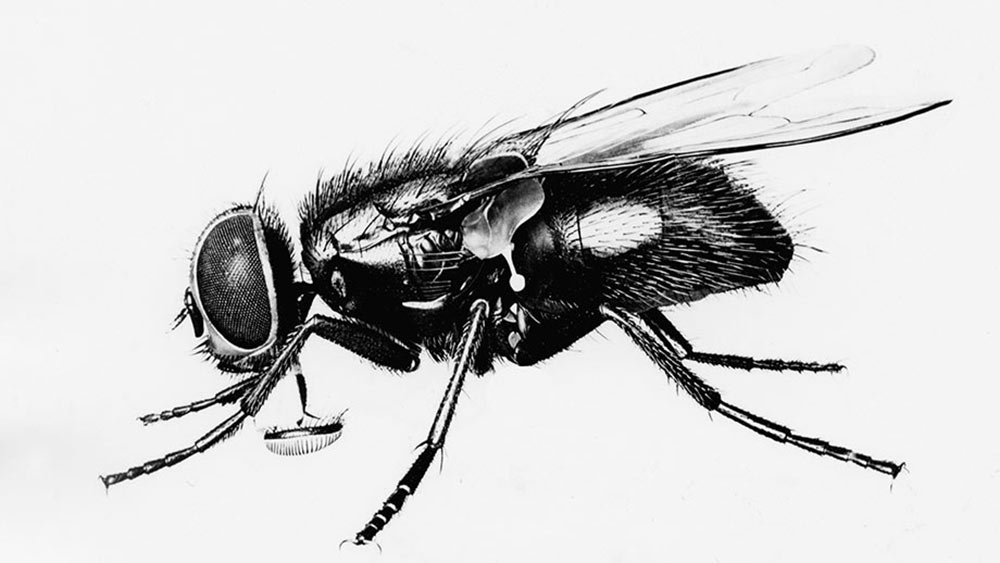 Aristotle killed the fly off in one sentence and banished it to the realms of decay and disgust. (Image: Keystone)

It is generally thought that, on the whole, flies don't have much of a literary existence. In fact, it's more the case that these pesky little creatures seem to arrive just as we have settled down with a book – and end up actually disturbing our literary experience. Zzzz and splat! Oh no… the insect's stuck to the back of the book. But if we listen hard and focus our gaze, we will see that flies do indeed hum and buzz their way throughout the history of world literature.

"God is in the details," said cultural scientist Aby Warburg. With this in mind, and armed with an eye for the trivial, German literature specialist Davide Giuriato has dedicated himself to what he calls "micrology" – the study of the small and tiny, a practice that he learned from philosopher Walter Benjamin. It's actually more of a philological approach, following in the footsteps of Brothers Grimm and their language research: Every little detail, no matter how small, every comma, etc. deserves the highest attention. While their Romantic contemporaries mocked this old philological attitude as "devotion to the insignificant", a good hundred years later modern cultural theorists such as Walter Benjamin and others were to move it to the heart of their methodology. Cultural phenomena reveal themselves not in the things that stand out, but in the inconspicuous and unimportant details – as Italian microhistorian Carlo Ginzburg explains in his famous essay on the "evidential paradigm".

But how did Davide Giuriato come to be interested in flies? As a literary and cultural scholar, the professor is also interested in advancements in natural science. It was while studying how microscopy emerged during the 17th century, that the fly effectively crept under his microscope, so to speak. For the researchers of this era, the potential of magnification opened up a whole new world to their eyes. In what splendor did the supposedly ugly fly appear under glass! A dazzling, shiny, perfectly constructed creature!

This was a milestone in the career of the fly, Giuriato explains. Before that, it had led a miserable literary existence for thousands of years: A motif associated with feces and rot, it represented the dark and gloomy depths of literature. It was Aristotle who banished the poor creature to the realms of death and disgust. In his book of zoology, he killed flies off in just one sentence: They came from maggots that bred in rotting manure. Zzzz and splat! The idea of being born into filth sealed their status as lowlife. In contrast to bees and ants, who submit themselves to the common good and – with their division of labor and systematic orderliness – serve as role models for society, the lone fly leads an apparently useless life.

In praise of the fly

But, of course, this degradation didn't mean that the fly was swiped from our cultural memory completely, zzzz and splat! While Aristotle had been responsible for the fly's association with death, excrement, rot and garbage, Baroque painters, for example, were to adopt it as a symbol of vanitas, or transience. Similarly, the insect was awarded an amusing parallel existence in another discipline – in rhetorical poetry: Lucian, a sophist and satirist from the 2nd century BC, explicitly chose the fly for a rhetorical exercise. An object that was as unworthy as possible was to be the subject in a display of rhetorical brilliance. The idea was to praise the world's lowliest creature in such a way that it became the worthiest. In Praise of the Fly became a showpiece that lasted until the Renaissance, when it was superseded by Leon Battista Alberti's rhetorically brilliant Musca. About the Fly. It was therefore thanks to rhetorical tradition that the disdained, disgusting blowfly was granted – albeit ironically – a distinguished existence.

But the true identity of the fly only came to light thanks to the magnifying glass, as it was only under the microscope that it could be appreciated in its entirety. In order to better appreciate the fundaments of insect poetry, Giuriato observed how new scientific insights impacted the literature of the time. Robert Hooke, microscopist and co-founder of the Royal Society, applauded the ingenious construction of the fly's body. And poet Barthold Heinrich Brockes, whose poems celebrated the smallest and tiniest of objects – a grain of dust or a drop of water – extolled the little fly. What perfection and beauty is revealed in the subtle structure of this little body. "How almost artificial!.../Must the little parts here/ Be confined by each other,/ Be intertwined with each other/ Miraculously connected!" In its enlarged form, the little animal creature now appeared in its full splendor, reflecting its divine creation, which, as Leibniz the philosopher explained, is functional and aesthetic down to the smallest detail.

But, let us not forget: Flies and mosquitoes can also be dangerous beasts. Davide Giuriato marks the next milestone in the fly's career with a new reputation acquired in the 19th century, again thanks to advancements in natural science: The discovery of bacteria. Flies and mosquitoes were now regarded as carriers of pathogens that were able to generate life-threatening epidemics. Literary figures suffered and succumbed to infections caused by these creatures – in Luigi Pirandello's La Mosca (1922), for example, or Robert Musil's The Portuguese Woman (1923). It is no coincidence that Musil's Flypaper (1913) was written with reference to an industry that emerged with 19th century developments in pest control. In this short text, Musil describes the struggle and ultimate death of a fly which gets stuck on an adhesive strip of the "Tanglefoot" brand – one of the first well-known manufacturers of pesticides in North America.

It was at the beginning of the 20th century that the fly climbed the next rung of its career ladder. When Drosophila melanogaster, the fruit or vinegar fly, played its part in helping genetics achieve its breakthrough in 1910, it seemed that the vilified fly had finally been rehabilitated. Giuriato says that this third milestone raised the fly to the status of cult insect. US geneticist and biologist Thomas Hunt Morgan selected it for his lab research and, after a number of crossbreeding experiments, was able to demonstrate the basic structure of the chromosomes and thus lay the foundation for modern genetics.

This modern genetic research gave the fly what it had been denied for thousands of years: A purpose. Drosophila melanogaster is the perfect model organism for genetic and developmental studies. Cheap and easy to breed, it is ideal for experimentation and can be killed without any apparent consequences. It reproduces quickly and has an incredible number of offspring, thanks to its energetic sexual activity: Just 24 hours after mating, the female lays up to 400 eggs, and after just 15 days the next generation hatches.

The insect of death had now been transformed into an insect representing vitality. Finally moved from its backstage role to the center of the action, the little creature began to appear in cultural productions in a range of new roles – as a horrible mutant, for example, in the short story The Fly (1957) by George Langelaan and its famous film adaptation by David Cronenberg (1986). A silly coincidence, so the story goes, leads to a researcher being crossed with a fly – and the result is a genetics horror show. Christoph Marthaler's play The Fruitfly (2005) is less about genetics and more about life in the laboratory. The actors wear white smocks and grow physically closer and closer to their research object, until they ultimately become fruit flies themselves. This is not so far from the truth as it may seem: Science historian Robert Kohler observed in a study how the researchers around Thomas Hunt Morgan, who spent decades together with the little creatures in the laboratory at Columbia University, increasingly entered into a kind of symbiosis with them, respecting and emotionally identifying with them.

Davide Giuriato's library of fly literature comprises a total of four meters of shelving, with not only a large number but also a wide variety of texts. The literary insect researcher, who is working on a study on this subject, says that the works of fly literature cannot all be measured by the same yardstick. Although the Aristotelian notion of associating flies with decay, death and disgust is persistent and powerful, fly literature is much more heterogeneous and by no means always linked to death. In fact, there is no way of knowing when the fly is likely to turn up in literature. Over and again it buzzes in when we least expect it.

The literary fly is less of a symbolic than a diabolical creature, says Giuriato. Not in the sense of "of the devil", but in the literal sense of the Greek "dia-ballein" (to confuse or tear apart) – appearing when a sense of order falls apart. Cronenberg's fly researcher has a gruesome grin on his face. The fly performs acts of anarchy and follows unpredictable paths. To gain a better understanding of insect poetry, readers must surrender to its random and arbitrary nature. And so next time we hear the familiar buzz around our head, we should prick our ears and see where the creature takes us as it winds its way in and out of world literature.

In Praise of the Bee

An insect living a completely different literary life to flies is the bee, which have been highly valued and much admired in literature for centuries. Aristotle paid homage to the species in his Historia animalium – an insect of the sun, a bee carries the truth within it and is connected to the metaphysical. Furthermore, for Aristotle, the bee is a zoon politikon, a social being. Bees – and ants too – are socially organized creatures of the highest order, functioning only in a community, with the perfectly organized bee state and division of labor ensuring the insects' survival. Bees and ants seem to be capable of better forms of social organization than humans. When modern societies started to become established around 1900, a particular interest for bees and ants was kindled in literature. The famous symbolist Maurice Maeterlinck, for example, wrote three widely read works on social insects: The Life of Bees, The Life of Ants, and The Life of Termites. In 1912 Waldemar Bonsel published the social novel The Adventures of Maya the Bee, which was later adapted into a children's television series. Later, Ernst Jünger, who was a beekeeper himself, described how he stalked insects in Subtile Jagden (Subtle Hunts) while his science fiction novel The Glass Bees demonstrated his ideas for future social forms.

The fascination for socially organized insects remains intact to this day. Even in recent popular scientific publications such as Ant Societies by Niels Werber and Thomas D. Seeley's Bee Democracy, insect sociality serves as a mirror and means of comparison with our own human society.