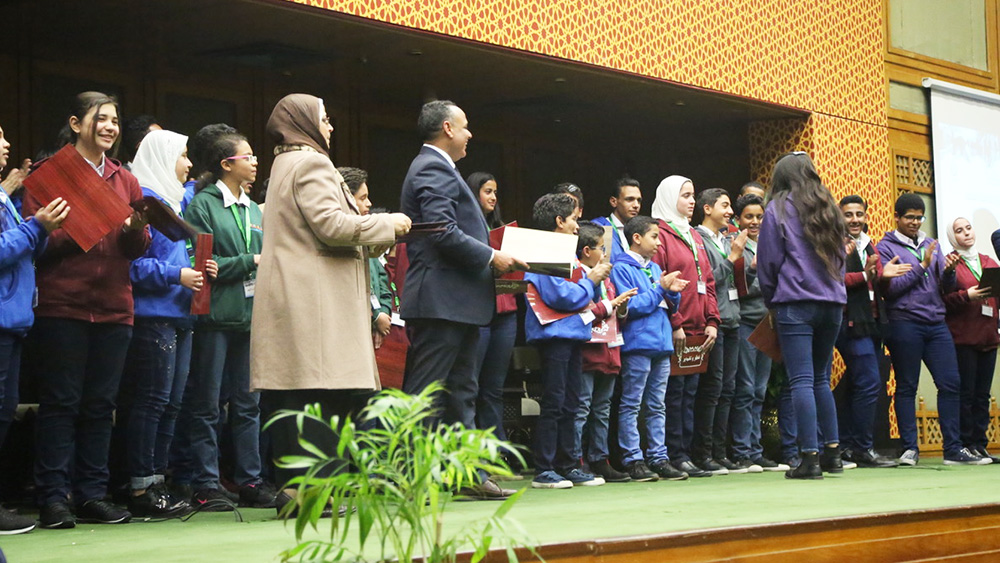 Treffen der Kinderuniversitäten in Kairo
Applause for all involved: Children and organizers at the Arab Children's Universities Conference in Cairo.

Sybille Leuthold, you recently went to Cairo to attend a meeting between Egypt’s children’s universities. How did this meeting come about?

The conference in Cairo was the first-ever meeting of children’s universities in the Arab-speaking world and was organized by Egypt’s Academy of Scientific Research and Technology. High-ranking politicians and teaching staff also took part in the conference, and this shows you just how much appreciation there is for the work of children’s universities in Egypt. Many children and their parents were also there, and their presence gave the event a lively and interesting atmosphere. The children, all of whom were past or current students at one of Egypt’s 34 children’s universities, put together an exhibition with various stands and also held presentations about their wishes and interests.

What kind of topics did the children bring up?

They talked about topics such as climate change, droughts, energy, health and education. Many of the topics they’re interested in have to with their own experience. For example, in the exhibition a few children displayed a model Egyptian village, with its huts and fields, animals and people. I was very impressed with how the children were involved in putting together the program for the conference.

Why were you invited to the conference?

What are the differences between children’s universities in central Europe and those in Egypt?

Children’s universities in Egypt are organized quite similarly to ours. There are lecture series and workshops, which are free of charge. In Egypt, they take place on Saturdays, when children are off school. The programs are available to a wider age range in Egypt, where kids between eight and 15 years old can take part, while at UZH it’s eight to 12-year-olds.

And unlike here, children’s universities are part of the educational concept, which means they’re state-funded, whereas we require funding by sponsors to run them. The programs are also supported by local teachers.

What did you take home with you from your trip?

I got the impression that education is very important to the Egyptian government, and the children’s university programs are a significant part of its educational campaign. I was impressed with the joy and enthusiasm that the kids expressed for scientific topics, which is something that I also see at the Children’s University at UZH. And I could even see us organizing regular sessions in the future to exchange views and ideas with our colleagues in Egypt.