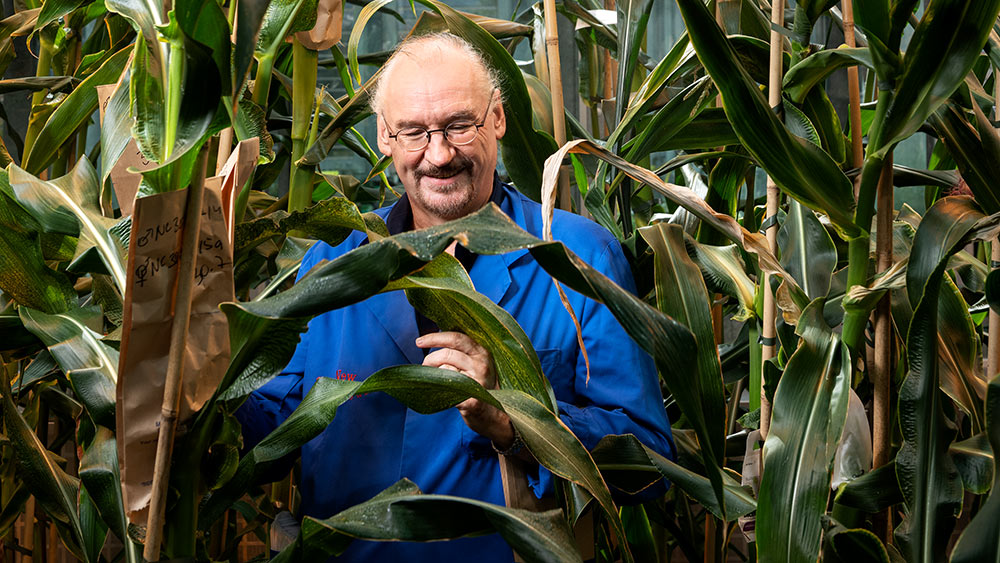 Ueli Grossniklaus is a molecular biologist with an ambitious goal: He wants to revolutionize agriculture with new breeding techniques. He says this is urgently necessary if we want to go on producing enough rice, corn and wheat for the world’s growing population. The tall professor with nickel-framed glasses has for years been working full speed on various procedures including apomixis, a form of asexual reproduction by way of seeds, and epigenetics, the way the activity of a gene is modified without the gene itself being changed. Recently he and his team pulled off a groundbreaking experiment in this field: “For the first time we could use plant models to show that epigenetic changes are subject to selection and can be passed on across multiple generations.” In other words, epigenetics really can be used for plant breeding.

But what exactly is it about? If you browse through the literature on epigenetics, you come across titles such as “Was Lamarck right?”, “Victory over our genes?” and “How are acquired traits inherited?”. Grossniklaus, who has been doing research into epigenetics for the last 25 years, gets excited: “There can be few scientific topics about which more nonsense has been written.” Some have celebrated it as the phenomenon of the century, while others have mocked it.

The fact that epigenetics has in some cases degenerated into a misused buzzword also has to do with its late discovery. Only in the 1950s did biologists come across inheritable characteristics that behaved unexpectedly; later they discovered the underlying molecular mechanisms. Prior to that, the prevailing dogma was that all characteristics are determined and passed on by the genes’ DNA – in other words the sequence of their chemical building blocks, the nucleotides. At that point, scientists realized that chemical changes to the nucleotides and histones (see box) determine gene activity and can even “lock” or open genes. And it became apparent that these epigenetic locks were influenced by the environment.

Ironically enough, one experiment that initially went down as the biggest flop in the history of genetic research turned out to be particularly illuminating. In 1990, scientists at the Max Planck Institute for Plant Breeding Research in Cologne planted 30,000 genetically manipulated petunias in a test area the size of a football field. The first open-air experiment in Germany was preceded by a protracted debate on the potential environmental risks. In the end, the researchers were given the green light and planted the petunias, which had been genetically manipulated to grow salmon-pink rather than white petals. The artificial color was supposed to isolate so-called jumping genes. Then came a period of blistering hot weather, and the salmon-pink petunias unexpectedly faded, scuppering the original experiment. Spiegel magazine famously described the highly controversial trial as a “fiasco in color”.

However, it subsequently emerged that the heat had activated epigenetic processes that crippled the artificially introduced color gene. The failed experiment thus led to some important insights after all. It showed that the environment can directly influence gene activity and change nucleotides. Scientists appeared to be on the scent of a mechanism reminiscent of the controversial theories of Jean Baptiste de Lamarck (1744–1829), who claimed that acquired traits could be passed on. According to Lamarck, for example, giraffes have long necks thanks to individuals that were able to stretch up high, and passed on this ability. Darwin rejected the idea of this kind of adaptation. According to the theory of evolution, new traits are formed through random mutations and selection by the environment – the survival of the fittest.

After the petunia experiment, the scientists resumed their research into the question of how environmental conditions could directly change the genetic machinery – apparently contradicting Darwin. They were able to show that genes written down in DNA can be deactivated or activated by chemical modifications. This is thanks to methyl groups consisting of one carbon and three hydrogen atoms which are attached to or removed from a specific nucleotide.

In the case of plants, he says, the answer is a definite "yes". There are many examples of epigenetic inheritance, for instance a form of the flowers of the common toadflax (Linaria vulgaris), whose shape is determined exclusively by the deactivation of a gene by methylation and passed on to subsequent generations.

He admits, however, that the evidence for mammals and humans is weak. Grossniklaus advises caution when it comes to reports of the influence of grandparents’ nutrition or stress on the health of their grandchildren. Although some studies postulate a connection, it’s not clear whether epigenetics is really part of it. This is because in humans and other mammals the epigenetic status of the egg and sperm cells is each time reset to zero during their development. In plants, by contrast, the development of gametes isn’t as hermetically separate as in mammals. Grossniklaus points out that this makes sense, otherwise we would carry all the stress experienced by our ancestors around with us.

In their pioneering study, Ueli Grossniklaus et al go a step further, showing that epigenetic plant characteristics are not only stably inherited, but also that they’re subject to selection – something that many scientists had doubted. To do this, the team used sprouts of mouse ear cress (Arabidopsis thaliana) selected over several generations for seed dispersal. The researchers collected the seeds that had been carried away the farthest and let them sprout again. Then they let the plants grow for three generations without selection, and compared their epigenetic status with the original plants. “We found changes in methylation in 50,000 DNA building blocks,” says Grossniklaus. In the course of the experiment various randomly deactivated genes were selected that have to do with flowering time, degree of bifurcation, and plant size – all characteristics that affect seed dispersal.

What at first seems an unremarkable finding actually represents a great step forward, placing epigenetics in a new light and for the first time showing that it's subject to selection and can be used in breeding, at least in plants. These new insights are the result of hard work and perseverance, in the field and in the lab. “We worked on it for more than 10 years,” says Grossniklaus. It required a lot of effort to verify the epigenetic status of each individual nucleotide in the plant’s DNA and exclude genetic changes. While mouse ear cress has only a small genome with 125 million pairs of nucleotides, every single nucleotide from a total of 40 plants used in the experiment had to be analyzed. These studies were technically challenging and expensive, which made them hard to fund.

Grossniklaus is in no doubt about the significance of his research findings. “Epigenetic variation extends conventional genetic variation and can be encouraged systematically,” he explains. While it’s less stable than a genetic modification, it occurs more frequently and thus allows rapid adaptation to changing environmental conditions – more rapid than via normal inheritance (remember the petunias in Cologne). As Grossniklaus says, this would provide breeders with a new means of adapting crops and cultivated plants to changing environmental conditions, for example saline or dry soil. The scientist has come one step closer to his goal of assuring harvests for future generations.

Chemistry with a Huge Influence

The word epigenetics, derived from the Greek epigenesis, describes the way new structures form in the course of the development of a living organism. The prefix “epi” means “over” or “upon”, and indicates an additional component of genetics. The main work in this field has been done by developmental biologists such as the famous UZH zoologist Ernst Hadorn (1902–76) and the British scientist Conrad C. Waddington (1905–75).

Waddington marked the beginning of a modern understanding of epigenetics concerned with the activation of genes, or gene expression. Epigenetic changes alter the organism – the phenotype – without modifying the underlying genes, in other words its DNA sequence. Instead, epigenetic markers determine whether or not a gene is read and thus expressed.

As we now know, the activation of genes takes place via simple chemical compounds (methyl groups) that are attached to their building blocks, the nucleotides. Removing them deactivates the gene. A second epigenetic mechanism works on carrier molecules of the DNA that bind with the genetic material, so-called histones. Gene expression can also be steered through the bonding of different molecules to the histones.

Epigenetics uses these refined mechanisms to control gene activity in the DNA in the cell nucleus. It does not affect the structure of the genes, which is determined by the sequence of nucleotides. Environmental influences can change epigenetic activation patterns. The degree to which they are inherited varies depending on the organism.