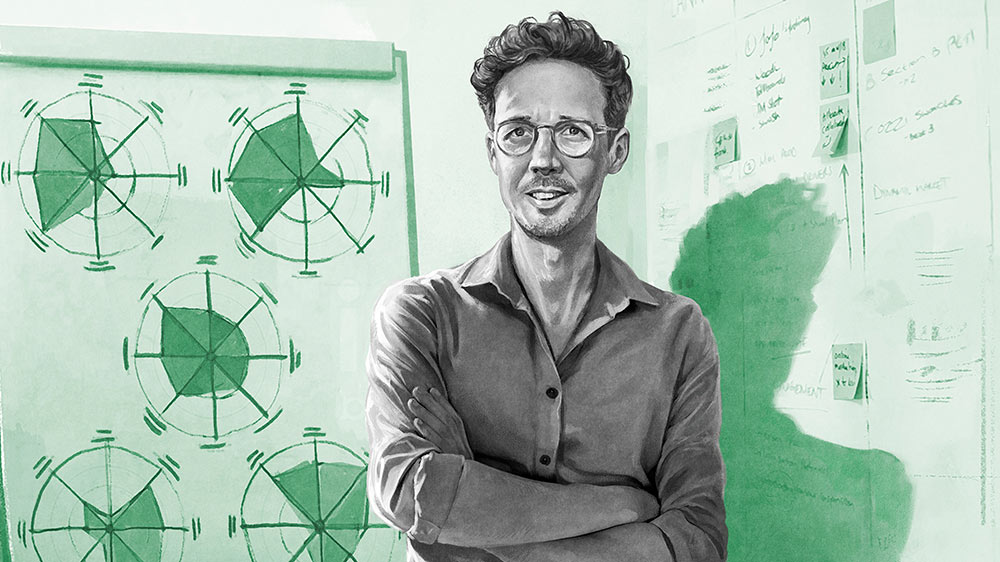 If you’re interested in politics, you’ve seen Michael Hermann. The political geographer’s unprecedented knowledge about Swiss political parties and developments makes him the obvious choice whenever the media need a political expert. Hermann is sitting across from us in a café, looking exactly as he does on the TV screen. Calm and considered, he speaks in a Bernese dialect, which he’s retained despite living in Zurich for the past 28 years, about how becoming one of the most important political analysts was actually a coincidence.

After earning his Matura in Langenthal, he was above all interested in the natural sciences and philosophy. He was particularly taken with psychologist Norbert Bischof, who was teaching at the University of Zurich and had been a student under Nobel laureate and behavioral scientist Konrad Lorenz. Bischof’s research pushed the boundaries of his field, and he built up a psychology department with a strong experimental and mathematical focus. He was also interested in systems theory. “I’ve always been fascinated with crossing the borders of scientific fields,” says Hermann, looking back. He matriculated at UZH in 1991 and started studying psychology.

However, he changed course after two semesters, choosing instead to study philosophy and history, not least because Bischof was an old-school instructor who usually wasn’t open to criticism and whose patriarchal style could be off-putting. This move into the humanities, however, failed to make Hermann happy, and so he turned to geography. He made this move because for one thing, geography was a transdisciplinary subject that covered many “interesting topics such as cartography or space”. For another, it was a “subject with a weak identity”, which affords students a great deal of liberty as well as opportunities to develop their individual interests.  As someone who enjoys crossing borders, Hermann quickly felt at home in this “less hierarchically organized” field of study.

In a way, Hermann's career path was only logical. He grew up in the small town of Huttwil in the canton of Aargau, his father a third-generation chemist and his mother a traditional housewife who moved in academic circles. The town was neatly organized into clear networks and structures. “This narrowness automatically challenges an inquisitive mind to break out of its confines,” says Hermann, the first academic in his family.

At university, the field of social geography allowed him to indulge in his penchant for nonconformity. As a visual thinker, Hermann explored mapping as a means of presenting social and political facts. After graduating, he set up the SNSF project “sotomo” (short for: social topology and modernization) together with his friend Heiri Leuthold. The project brought about the now well-known “spider-web profiles” that illustrate the political profile of a person or party on the basis of eight dimensions. Another milestone was the Atlas der politischen Landschaften. The book, published in 2003, was the first to present Switzerland’s communes and regions in an ideological system of coordinates, providing surprising insights. The book’s maps visualized the distance between geographical regions and places in terms of their ideology and political beliefs.

The award-winning publication, which Hermann used as a basis for his doctoral thesis, suddenly turned Hermann into a much sought-after political analyst in the media – despite the fact that he was a social geographer by trade. Not all of his peers forgave him his crossdisciplinary “transgressions”. But Hermann enjoyed his media role as a kind of public intellectual. “In the media there’s a need for news to be put in perspective, and I enjoy doing that,” says the social geographer cum political analyst. This is a contrast to the world of academia, where novel approaches can sometimes struggle to gain a foothold.

Hermann believes the world of academia is much too orthodox, which is also why an academic career was out of the question. While Hermann does have a (small) teaching assignment at the Department of Geography, that’s as far as his academic aspirations go. In 2007, he founded the company sotomo, which is based on the research project with the same name, together with his friend Heiri Leuthold, who has since passed away. Sotomo specializes in sociological research, consulting and teaching, with demographic analyses and opinion polling as its core business.

Hermann has since been going back and forth between his public role as a political analyst and his tasks as an entrepreneur. In 2014, the Tages-Anzeiger published a column by Hermann with the headline “Das Ende des kühlen Denkers”. This represented a clear shift away from his role as a neutral observer and analyst and announced his progressive, liberal beliefs. He later described this move as a liberating step outside of self-induced captivity.

The fact that he then slightly backed out of the media spotlight was more due to his focus on his business than the public acknowledgment of his personal political views. Today his business is the focal point of his activities, even though he still enjoys writing columns and providing analyses. How, then, would he describe his role today? “Social geographer, political scientist and – first and foremost – entrepreneur,” he says, adding: “I can’t think of any job I’d rather have.”