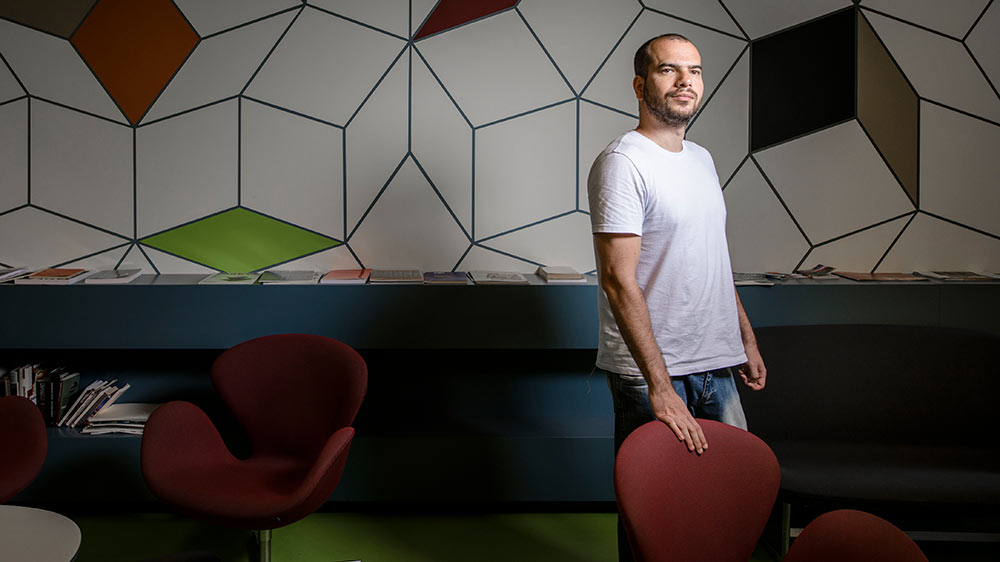 Artur Avila: "Unlike Newton, it doesn't matter to mathematicians whether the sun will still exist at some point in the future. We think on a longer time scale." (Image: Marc Latzel)

A blackboard with a chalk and sponge holder like in school classrooms of yore, with numbers, letters and squiggles scrawled upon it, partially erased and hastily overwritten. "I don't care for modern whiteboards," Artur Avila says with his feet propped up on the empty chair between us. An old-fashioned chalkboard is the only prominent wall ornament in the 40-year-old Brazilian's office. Avila joined the University of Zurich's Institute of Mathematics as a full professor a year ago. He could have landed a professorship at Stanford, Yale or Princeton, but he doesn't like the American way of life. "I feel less alone here in Zurich. I have many colleagues here who tick the same way I do."

But there probably aren't many who tick like he does. Before meeting with Avila on Irchel Campus in Zurich, I learned from Wikipedia that he is working on various kinds of dynamical systems and on mathematical physics subjects such as the spectral theory of Schrödinger operators. In his doctoral thesis, as Wikipedia relates, Avila extended the familiar investigation of bifurcations of quadratic mappings of the unit interval to unimodal mappings. He later solved the conjecture known as the Ten Martini problem, which deals with the structure of the spectrum of an electron in a magnetic field. Afterwards he established the ergodicity of the dynamics of generic (in the C1 topology) volume-preserving diffeomorphisms with positive metric entropy.

Did you catch all that? "Forget it," says Avila with a laugh. He sketches spheres and circles on a sheet of paper and holds it up to me. "It starts with physics, with Newton to be precise," he says. Isaac Newton famously figured out that the force of gravity causes a planet to revolve around the sun in a stable elliptical orbit. "And now picture a somewhat more complex system in which three elements react to each other. In such a system, nothing is stable anymore; motions are completely new and different." That, Avila explains, is close to where chaos theory begins, where humans reach the limits of predictability. And that's why Avila's research no longer has to do with physical processes, but solely with abstract mathematics. "What interests mathematicians needn't bear any relation to reality," says Avila. "Unlike Newton, it doesn't matter to mathematicians whether the sun will still exist at some point in the future. We think on a longer time scale."

Artur Avila wants to understand how highly complex dynamical systems – even ones that don't physically exist – change over time. And he would like to be able to forecast those changes to fulfill a boyhood dream. "Even as a child, I wanted to discover and explain things," recounts the mathematician. He wanted to become a physicist or an astronomer and to unravel the mysteries of the Big Bang. "Mathematics for me was a tedious subject at school. Everything we studied in class I had already read long before." One of his teachers encouraged him to compete in the Mathematical Olympiad when Artur was just 13. "I just up and went there, but quickly came to the realization that I had to seriously train for the competition if I wanted a chance at winning."

From that moment on, he ignored school, sports and socializing and started to really hit the books. He solved math questions from previous Olympiads the way other children solve old school test questions in preparation to pass the next exam. He competed in several Math Olympiads and won a gold medal at the age of 16. During his final year of high school, Artur Avila concurrently studied at the Institute for Pure and Applied Mathematics in Rio de Janeiro, the most prestigious mathematical research institution in Latin America. "I was glad to finally be in the right place," he says. "I never liked high school." He even had to change schools at the age of 15. During a lesson having to do with proving God's existence, "our teacher wanted to compel us into believing that the existence of God isn't a dogmatic question, but can be explained by the laws of logic. I refused to accept that." Artur Avila continued to defy his teacher until he got kicked out of school.

His father and mother, of course, weren't thrilled about his expulsion. But they had already long known that their son was different from other children. Did Artur inherit his thirst for intellectual discovery from his parents? "No," he shakes his head. His father grew up in the Amazonian lowlands, only briefly attended school, and then worked his entire life as an accountant for a public-sector enterprise. A similar career was envisaged for Artur, but mundane accounting arithmetic never would have satisfied him. "I needed intellectual challenges," says Avila about himself in retrospection.

Even though he definitely could be rebellious, as evidenced by his expulsion from school, at root Artur Avila was a shy schoolboy and a timid college student at first. At university, he could hardly bring himself to articulate his thoughts and ideas out loud. "I wasn't accustomed to developing my own concepts, let alone airing them to the public. But then I suddenly saw other people who freewheelingly were peddling their ideas even if they soon proved false. That," Avila recalls, "is when it dawned on me that I didn't have to wait until all doubts about an idea were dispelled, that I was allowed to simply speak out and make mistakes." But Artur Avila never made all that many mistakes even though, as a child prodigy student, he was always the youngest in the room. "Thinking," Avila says, "is ageless. It doesn't bother mathematicians at all if a 16-year-old outargues a 40-year-old."

Avila started writing his doctoral thesis at the age of 19 and was awarded a PhD in mathematics when he was 21. He then accepted a position in Paris at the Centre National de la Recherche Scientifique, France's largest public organization for scientific research, where he was named the youngest-ever "Directeur de recherche" at the age of 29. Avila has won a number of international awards for his research work, and at the age of 35 he became the first Latin American to receive the Fields Medal, the most prestigious international accolade for outstanding discoveries in mathematics, which is widely considered the equivalent of a Nobel Prize for math.

What does this man, who neither looks nor talks like a university professor and math genius, find so fascinating about his field? Mathematics, Avila says, is a very peculiar discipline. A mathematician, he explains, needs far less empirical knowledge than that required, for instance, by a social scientist, whose knowledge stems from years-long experiments and studies. That's precisely why age isn’t necessarily an advantage for a mathematician, Avila says. Moreover, a mathematician doesn't need an experimentation laboratory like a natural scientist, for instance, does; a mathematician doesn't need facts to prove a theory, he says.

"In mathematics, you can work abstractly, completely independently of facts. You create a model and contemplate on it, but you don't have to compare it against the real world." What's important though, says Avila, is exchanging ideas and insights with other mathematicians. He and his research partners primarily need computers and the internet to do that. Avila is presently involved in multiple concurrent research projects in Europe, the USA and China. "The bulk of my work is done on a computer screen from thousands of kilometers away." But every now and then, Artur Avila also discusses his work with colleagues and students at the Institute of Mathematics on Irchel Campus. Together they create ideas, calculate them out, discard them and seek out new ones. And that's exactly what the slate board on the wall in Avila’s office is there for – black and equipped with a chalk and sponge holder like in school classrooms of yore.

"Books are too heavy for me"

Where are you at your most creative?
Anywhere where I can relax, for instance when I go for a stroll in a placid city like Zurich.

What do you do to clear your head and think up new ideas?
I don't have a specific formula for that. New ideas come to me best in discussion with other mathematicians.

Which famous person would you like to have dinner with, and why?
Certainly not with a scientist. I'd prefer to have dinner with an artist – with a writer for instance, with someone who lives in a world that's different from mine.

The three books you'd take on a desert island?
Books are too heavy for me, I exclusively read electronically now. And I don't read fiction. I browse the internet for reading material on history, geography and society. I'd want to do the same on a desert island.

Ballpoint pen or laptop?
Laptop. And chalk, to do calculations on the blackboard in my office.

Mountain or beach?
Beach. Mountains are pretty foreign to a Brazilian like me.