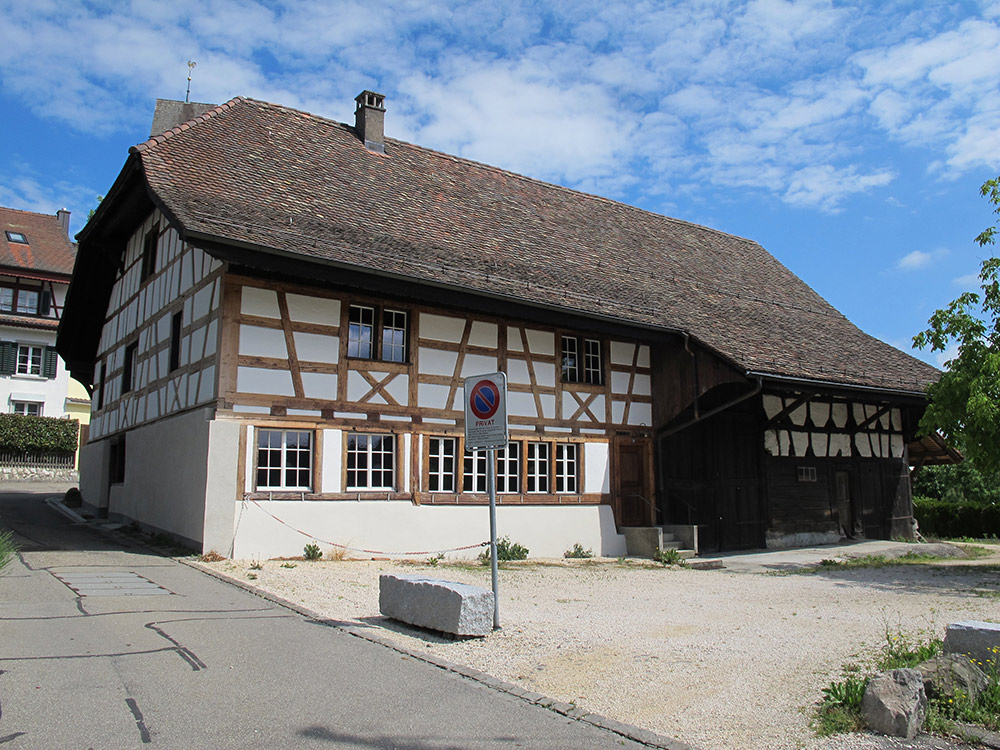 Image Gallery
Picture gallery: The photographs show a selection of buildings that will appear in the new Dielsdorf volume of a series of books about Switzerland’s historically significant buildings. (Pictures: Regula Crottet, Anika Kerstan, Carola Jäggi)

Churches and schools, stately homes and housing estates, factories, bridges and farms: These are the types of buildings that have been attracting the attention of art historians Regula Crottet and Anika Kerstan and historian Philipp Zwyssig since last summer. They have been out and about in the district of Dielsdorf, recording the historical buildings that are still standing, making appointments to visit peoples’ homes, and trawling through the village archives. Regula Crottet says her house visits have piqued the curiosity of the owners: “People are usually very happy to find out that their house has value in terms of art history.” Their research will be collated in a volume in the series on historic buildings published by the Swiss art history society [Gesellschaft für Schweizerische Kunstgeschichte, GSK] – see box.

Witnesses of an era

The research team are treading a partly worn path, as Hermann Fietz already published a volume about Dielsdorf in the same series back in 1943. But while the architectural historian and architect had to limit himself to 62 pages, this time the book will be 496 pages long. “Our views about historic buildings have developed since 1943,” says Carola Jäggi, professor of medieval art history and archaeology at the University of Zurich.

Fietz mainly concentrated on churches or grand buildings constructed up to 1850, while now the team are considering buildings such as industrial premises and factories, business premises, housing estates, and schools, including more recent constructions. The criteria, says Regula Crottet, are: “How well maintained the buildings are and whether they tell us anything about one particular or several eras.” That means aspects including art history, architecture and social history are taken into account. Alongside individual buildings, the team is analyzing settlement structures and development, roads, and water supplies.

The cataloging project, which was set up by the Canton of Zurich monument preservation department and the GSK under the leadership of Carola Jäggi, ties into a long tradition of Zurich art history which began around 150 years ago with the work of Friedrich Salomon Vögelin and Johann Rudolf Rahn. Rahn, the first professor of art history at the University of Zurich, researched and cataloged historic monuments in Switzerland, i.e. buildings that could serve as witnesses of a particular epoch.

The work that goes into collating a volume of historic buildings involves basic research and provides a robust understanding of the construction history of a region. “These volumes are handbooks that will still be cited in 40 years,” says Carola Jäggi.

The collaboration with the monument preservation department is also helpful for her teaching, says Carola Jäggi: “Next semester we’ll be able to offer the students an introduction to the practice of cataloging.”

New volumes in the series are also planned for the rural Zurich districts of Affoltern am Albis, Andelfingen, Bülach, Hinwil, Horgen and Meilen, with the Dielsdorf book being the first from this group. “Many communes in the region that were still largely made up of agricultural land until the mid-20th century have seen a boom in construction in the last few decades which has had a major impact on the settlement structures and the number of remaining historically significant buildings. That’s why it’s good that we are documenting the remaining historic buildings now,” says Regula Crottet.

The commune of Regensdorf in Dielsdorf recently provided a sad example of the way Switzerland’s building heritage is disappearing. The owners of the protected former farmhouse of 1559, Fröschegrueb, had allowed it to fall into disrepair, and were then granted permission by the communal council to raze it to the ground (contrary to the law). The owners are obliged to build the house again, but the historical value has been irrevocably lost.

“We don’t appreciate what we can’t see,” says Carola Jäggi. The Kunstdenkmäler series gives worth to historical buildings – part of our collective memory.

The long-term project Die Kunstdenkmäler der Schweiz run by the society for Swiss art history [Gesellschaft für Schweizerische Kunstgeschichte, GSK] currently comprises 137 volumes, each of which weighs at least 1.5 kilos and has around 500 pages. The GSK began in 1927 with a book about the Schwyz districts of Einsiedeln, Höfe and March, and since then several generations of researchers have recorded and described historically significant buildings according to the principles of architectural history. The series is not yet complete, and some cantons do not yet have any volumes in their name. Other volumes have appeared over the course of the years – such as the one about the Zurich districts of Bülach, Dielsdorf, Hinwil, Horgen and Meilen of 1943. The new Dielsdorf book will be published in 2023.

Carola Jäggi is leading the three-strong project team for the new edition about Dielsdorf, in collaboration with the Canton of Zurich monument preservation department. Holder of the professorial chair for medieval art history and archaeology of the early Christian, medieval and late medieval era at the University of Zurich, her main focus is on the history of architecture. She is co-author of the Kunstdenkmäler volume about the Basel Minster, and is a member of the board of the GSK.

Art historian Regula Crottet has previously contributed to two other volumes in the series about the city of Zurich.