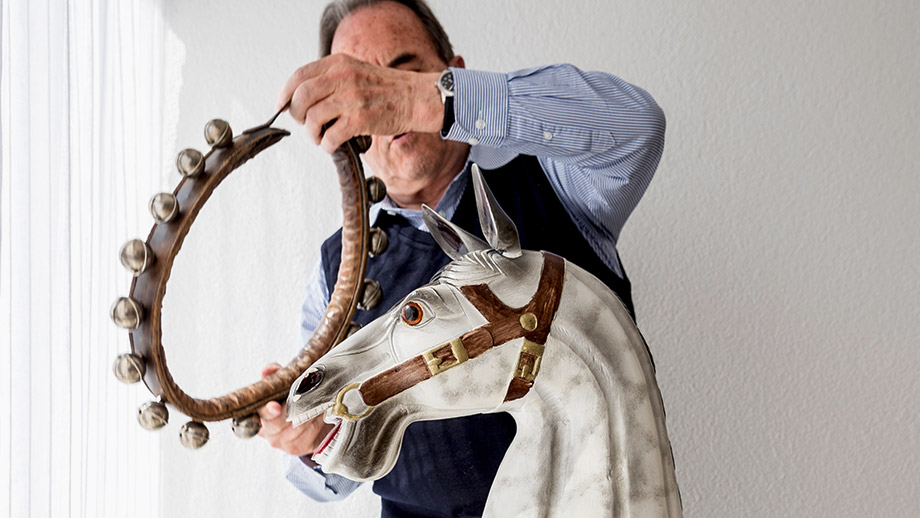 What doesn't kill you makes you stronger. There could be some truth in this saying, says psychologist Myriam Thoma, who is interested in how people deal with stressful experiences. As co-director of the "Resilience" research group at the Department of Psychology at UZH, she knows that a certain amount of experience with stress can – under favorable conditions – advance personal development and resilience. As part of the University research focus "Dynamics of Healthy Aging", she and her team have conducted a study with former "Verdingkinder" – children who were taken from their families and forced to work on farms – to investigate how it is possible for a person to remain mentally healthy as they age despite having gone through a tough childhood and adolescence.

"You are nothing, you can do nothing, you will never be anything." This sentence, a former Verdingkind told psychologists, is the worst thing you can say to a child. In the 19th and 20th centuries in Switzerland hundreds of thousands of children were torn from their families and taken to distant farms where they were used as cheap labor. There most of them experienced enormous suffering, were emotionally neglected, beaten and sexually abused. They were uprooted, forced to work hard and had to fend for themselves. Children were hired out in this manner in Switzerland until as late as the 1960s.

It was only a few years ago that the processing of this dark chapter began – with former Verdingkinder finally breaking their silence, and books and reports appearing on the subject. Under the direction of Andreas Maercker, several studies were conducted at the Department of Psychology in Zurich to investigate how the Verdingkinder have fared throughout the course of their lives and what the long-term consequences of the traumas they suffered have been. The sad result is that many of the interviewees suffered from depression, post-traumatic stress disorders and persistent anxiety disorders through to old age. An unknown number of the victims have taken their own lives.

On the other hand, the studies also showed that about half of the approximately 140 respondents have not suffered from any clinically relevant psychological complications. This came as a surprise to researcher Myriam Thoma, as psychologists had previously assumed that a traumatic childhood or adolescence would greatly increase the probability of subsequent psychological damage. But this is not always the case. Apparently, there are also Verdingkinder who have been able to cope with their negative childhood experiences, i.e. who were resilient. How could it be, Thoma wanted to know, that misery like this destroys some people and others survive it almost unharmed? In other words, what are the factors that enable a person to get through a crisis?

The UZH psychologists conducted two surveys to try to find out more about resilience. They wanted to know if there were any specific factors that could enhance resistance and help develop stress-coping strategies. Thoma and her team held interviews with 12 psychologically and physically healthy former Verdingkinder with an average age of 71.

Inner strength is one of the factors that determine resilience, Thoma concludes from the interviews. The conviction that I can do it, that I must survive it, can help a victim overcome a crisis. Nonetheless, the psychologist underlines, resilience is not just a matter of character. The environment also plays a role. One former Verdingkind said that the school doctor had been an angel, and a great source of support in his misery; another said it was the kindergarten teacher who had intervened to help. The victims also talked about relationships to animals and nature that had given them the strength to cope with the crisis. Thoma explains that people in desperation are helped when something in their environment puts the situation into perspective and offers them alternatives. In actual fact, some of the former Verdingkinder were even strengthened by their adverse experiences and went on to develop special abilities. In psychology, this is referred to as "steeling" (see box). However, this must not be interpreted as simply hardening up because it can be quite the opposite: A crisis may well release resources in a person that can help them develop their full potential.

For example, their troubling experience may lead victims to develop an anti-perpetrator model. After all, the last thing they want to do is pass on what they have gone through. "What I experienced in my youth gave me the urge to achieve something in my life," said a former Verdingkind. Thoma mentions a woman who renovated her house single-handed. The experience of having survived a crisis can release inner powers and give the victim the confidence that they will survive further crises. Realistic optimism is one of the factors known to be conducive to psychological well-being, says Thoma. With this practice, people focus on the positive, despite their crises, and can then relativize bad experiences. "If something doesn't work anymore, you must look for another way; there is always another way," said one of the interviewees.

What was important for many former Verdingkinder was a change of location. Leaving the past behind and starting somewhere new opened up a "turning point": The chance to give their life a new direction and to develop their potential. Many of the victims have a huge thirst for knowledge. They have pursued further education courses, learned a language, taken up a special hobby, or enjoy music or painting. Most of the psychologically healthy Verdingkinder are eager to help others in society, and volunteer their time. Others are committed to improving child protection. This urge most certainly stems from their own sad experiences in which social support had largely been missing when they most needed it, Thoma says.

"Humans are survivors," sums up the psychologist, "they can survive crises." We are constantly having to adapt to our environment which is how we have reached the evolutionary peak, says the stress researcher. Nevertheless, about one third of the population suffers from clinically relevant psychic illnesses – which is an enormous number. Thoma sees this as a huge social responsibility in which her own subject must play its part. Psychology is on the verge of a paradigm shift – and Myriam Thoma wants her own research to contribute to this development. The perspective in psychology is shifting from one that is primarily deficit-oriented to one that is resource and competence-oriented. This has strengthened the influence of the branch called positive psychology, which aims to promote the strengths and potential that lie within people and can help them to deal constructively with stressful situations and cope with crises.

The term "resilience" stands for the psychological power of resistance that enables a person to endure and overcome crises. Initial studies on this subject have been carried out on children who grew up in stressful environments, such as living with schizophrenic parents or in extreme poverty. Researchers found that, despite adverse circumstances, some of the children examined did not develop any psychological complications or clinical abnormalities. While initially this resilience was attributed to their personality, further investigations showed that favorable environmental factors also play an important role. For example, if both parents of a child are mentally ill, a good relationship with an aunt, teacher or sibling is all the more important.

"Steeling" goes beyond resilience. Recent research has focused on the phenomenon of steeling, which literally means hardening or toughening. Animal research has shown that a moderate level of stress can be conducive to development as the body is then effectively immunized against stress and thus more resistant. From this we can draw analogies to the psyche: If stress is not overwhelming, negative experiences can help a victim to develop coping strategies. The person gains an understanding of their own strengths and becomes more stress-resistant due to having personally experienced that they can indeed survive crises. It is precisely due to this experience of crisis situations that special abilities can be evolved to deal with crises. However, since the perception of stress is very individual, it is almost impossible to quantify the level of stress that would be effective.