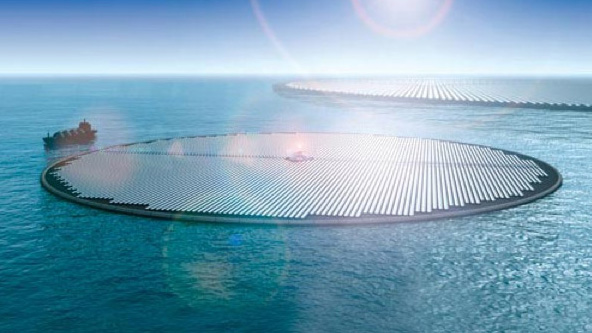 The floating solar islands could look like this. On the ship to the left are all the plants needed to produce methanol. (Image: Visualisierung: Novaton)

Paper, tin cans, glass - the world recycles as much as possible. So why not declare the greenhouse gas carbon dioxide (CO2) a recycling product as well? Liquid fuels based on carbon will continue to play an important role in the future - despite international efforts to reduce them. So it seems sensible to recover the CO2 exhaust from the environment and use it again.

Researchers from ETH Zurich, PSI and the Universities of Zurich, Bern and the Norwegian University of Science and Technology (NTNU), together with a team from Empa, have calculated this idea and have shown that solar methanol islands could produce enough fuel in the long term to make all CO2 emitted from transportation sources neutral - worldwide. In the middle of the oceans, hydrogen (H2) is to be produced from solar energy (and water), which is then converted into methanol on site using CO2 extracted from the seawater. To this end, the researchers analyzed in detail a scenario that still seems purely hypothetical, but already provides the basis for a possible implementation. They present their results in the journal "Proceedings of the National Academy of Sciences" (PNAS).

From sun to electricity to hydrogen to methanol

The idea is based on solar islands, i.e. floating platforms equipped with photovoltaic systems. However, since solar power cannot be stored and transported from there, a solar power plant on the sea makes no sense. Liquid methanol (CH3OH) as well as gaseous methane (CH4) can be produced from carbon dioxide and hydrogen. The researchers' idea is that the raw materials could be obtained directly from the ocean or produced there.

There are already large-scale power-to-gas plants that convert hydrogen and CO2 into fuel - including the "move" demonstration platform on the Empa campus in Dübendorf (see box). The question therefore arises: why go to sea with it? Why not, as existing plants do, extract CO2 from the air? The answer is simple: the space required for a worldwide supply of fuel would be enormous.

"An area of around 170,000 km2 would be needed to produce the annual demand for global freight transport," explains Andreas Borgschulte UZH-Adjunct-Professor and employee at Empa's Advanced Analytical Technologies lab. This could best be achieved by solar power systems at sea, a previously unused area that does not belong to anyone. CO2 can also be extracted from the air at sea, but an attractive - and still obvious - alternative would be to use the roughly 125 times higher CO2 concentration of seawater for the "carbon dioxide harvest".

In existing plants, the CO2 extracted from the atmosphere is mostly used to produce methane, which would also be possible on the solar islands. In the course of their considerations, however, the researchers decided to produce a liquid fuel because it is easier to transport. In addition, methanol can be used not only as a fuel, but also to manufacture other chemical products, such as precursors for polymer production. The possibilities for its use (and the profits that can be achieved with it) are therefore much greater.

However, such a "methanol island" has its price: the construction of such a chemical plant on the ocean would cost around 90 million US dollars. This would consist of around 70 photovoltaic islands with a diameter of around 100 m2 and a ship with the electrolysis and synthesis plants. This would result in a total area of around 550,000 m2. But a single cluster is far from sufficient to achieve a zero balance of CO2. A total of 170,000 such islands would be needed to recycle as much CO2 as is currently emitted - a utopian goal, but one worth pursuing. "Great ideas are needed – small solutions only supply small parts of the world, but not all of it," says Borgschulte.

Empa has long been researching ways of not only storing electricity from renewable resources, but also converting it into liquid or gaseous fuel. The Empa campus in Dübendorf is also home to the "move" demonstration platform. There, solar electricity is converted into hydrogen with the aid of electrolysis in order to refuel hydrogen vehicles with it. Synthetic natural gas, which is used in natural gas vehicles, is also produced there. UZH researcher Andreas Borgschulte and his team are working on ways to further improve these technologies.