This article was published in UZH Magazin 4/18. 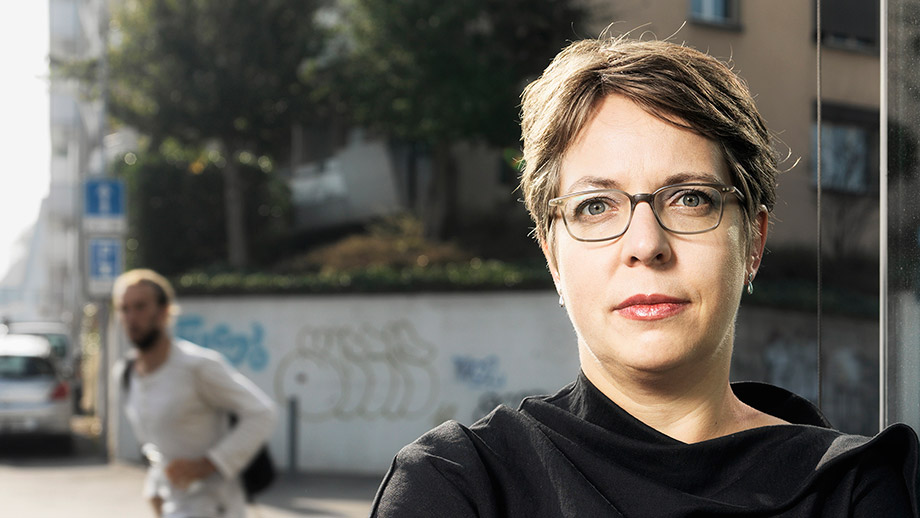 A bright 12-year-old girl sits in front of the TV watching the 8-o-clock news on German channel ARD. It’s December 1989, and she’s persuaded her parents to let her stay up for an extra quarter of an hour. What she sees is etched in her memory: German foreign minister Hans-Dietrich Genscher and his Czech counterpart Jiří Dienstbier cutting the fence between West Germany and Czechoslovakia in front of the world’s media. The iron curtain falls, as the Berlin Wall had done a short time before. Germany is reunified, Western and Eastern Europe reunited.

It was almost 30 years ago, but her experience of that time has shaped the direction of Stefanie Walter’s life, igniting her interest in political events and their connections. As professor of political science at UZH, the bright adolescent of 1989 now dedicates her time to researching the current affairs that she once followed avidly on the TV: Globalization, the euro crisis, offshoring, Brexit, populism, the shift to the right. Europe, which at the end of the eighties was trying to pull together, is falling into disarray, as is the post-war world order as we know it. What exactly is going on and where it might lead are the questions that preoccupy the sought-after professor.

Each morning she rides her bike alongside the train tracks of Oerlikon station to her office in the Department of Political Science. Now she is sitting in a meeting room for our interview and reflecting – but not for long: Walter thinks quickly and talks quickly. No, she tells me, her family home was not particularly political. Stefanie Walter grew up near Stuttgart with her doctor father, housewife mother, and three younger sisters. “Actually,” she remembers, “I planned to study something proper like law or business administration.” But after school she took a gap year to visit a pen-friend in Canada and study economics and political science in Montreal. She laughs mischievously:  “I was hooked.” Back in Germany, she managed to find a similar combination at the University of Konstanz where she studied public administration and economics. The connection between economics and politics is something that still fascinates her.

The cohesion of the EU, originally conceived as a peace project to provide stability, is coming apart at the seams. Walter, who is also on the board of trustees of the Swiss National Science Foundation, is examining the reasons for this. “The basic European consensus that democracy and international cooperation are needed to maintain peace and decent living standards is now being questioned,” she says. The increased power of populists has made conceivable the idea of individual states going it alone.

This trend, which is also seen in Donald Trump’s America First politics, is clearly exemplified in Brexit, explains Walter. She is interested in how the withdrawal of the United Kingdom will affect the other 27 EU countries. As part of a wide-scale study, for which she has received an ERC Consolidator Grant, she canvasses EU citizens for their opinions on a regular basis. What is going through their heads? Is there a risk of a domino effect? “In general, support for EU membership has gone up since Brexit negotiations began,” says Walter. But if Brexit goes well for the UK, it could increase support for leaving the EU amongst citizens of other member states. The situation in Switzerland will also be interesting, as there is a concrete proposal to scale back integration: Through the SVP’s Begrenzungsinitiative [limitation initiative], which demands an end to the free movement of people, there will be a referendum on the bilateral agreements with the EU.

The eloquent researcher, who lives in Zurich Wipkingen with her husband and two children, is not shy of the limelight – in addition to speaking at this year’s Battle of Ideas festival in Zurich on the future of Europe in an age of populism, she can often be found taking part in panel debates and round-table discussions, and is regularly called upon by journalists to comment on current affairs. Walter sees this public exposure as part of her job – making sure people have the information they need to form knowledgeable opinions. “As a political scientist I feel obliged to explain what is at stake.”

Is she a pessimist or an optimist? Walter sighs. By nature she’s actually an optimist... The “but” is left hanging. “I’m not sure whether the coming generation will live in a Europe that is as peaceful and stable as the one we have been used to.” Walter worries that we are forgetting the lessons of the past: “We have forgotten the horrors of war.” Peace and stability in Europe are taken for granted. But they are not guaranteed. Walter says she doesn’t mean to sound too pessimistic, but points out that in places where nationalist and right-wing populist governments promote the sovereignty of the nation state, conflicts can easily flare up. One example is the dispute between Austria and Italy regarding dual nationality in South Tyrol.

The cost of going it alone

Is there even a serious alternative to the EU? “The traditional parties say there isn’t,” explains Walter, “while the populists promise fantastical pseudo-solutions – that’s what makes them appealing.” Of course, there is the alternative of going it alone. But people must be clear about what this entails. “Alternatives have advantages and disadvantages,” says the political scientist. A country that wants to extract itself from cooperation agreements has to ask itself: At what price? Which of the advantages of EU membership is it prepared to relinquish – research funding, stock exchange equivalence or steel tariff exemptions, for instance? “An EU member state gives up some of its sovereignty in order to cooperate with the others,” says Walter. But it also gets something in return: Peace, stability, high living standards.

My time with the professor is up, and she’s anxious to get on with preparing her next seminar – she wants to make sure her students are equipped to debate knowledgeably about the political challenges of the day.