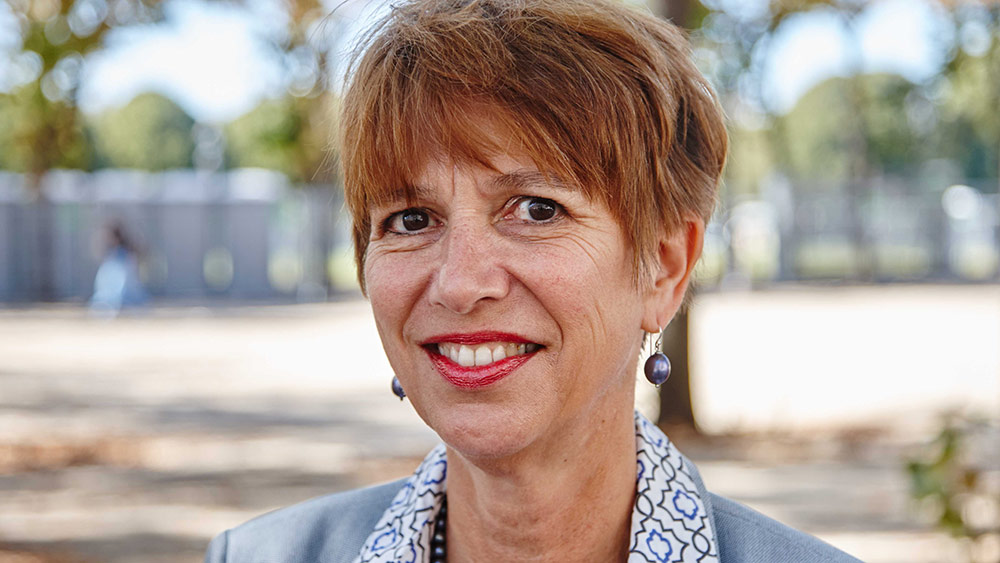 Portrait
Tackling a great challenge with optimism: Christine Schraner Burgener is tasked with bringing about peace in the conflict in Myanmar. (Picture: Stephanie Füssenich)

Christine Schraner Burgener’s life sounds like a string of well-timed highlights. She spent her childhood in Japan, studied at the University of Zurich, completed the entry procedures for a career in diplomacy, headed up the Swiss Federal Government’s division for human rights and international humanitarian law, worked as an ambassador in Bangkok and Berlin, and was appointed as the United Nations Special Envoy on Myanmar in May 2018.

With this appointment, the 55-year-old lawyer has been facing the biggest challenge of her professional life to date: She’s been tasked with bringing about peace in a conflict that many view as impossible to solve. Her role involves mediating between members of the military accused of genocide on their own people and the victims of this genocide, some 700,000 Rohingya refugees. The Rohingya Muslims, a minority ethnic group without any civil rights in the Rakhine State in Myanmar, have been persecuted by the government for decades.

They have suffered great pain, but the chances of improving their situation are small. And yet despite these prospects, Christine Schraner Burgener believes she can make a difference. “If I didn’t, I don’t think I could do this job. I’m a hopeless optimist,” she says.

This optimism, paired with a remarkable lightness, can be felt whenever Schraner Burgener speaks, and it also becomes apparent when she thinks back to her formative years. Having graduated school in Winterthur, she wasn’t sure about what she wanted to do next. “I was interested in so many things. I enjoyed playing the violin and drawing, and had always excelled in the arts subjects at school.” In the end, Christine Schraner Burgener opted not to attend art college or teacher training, and instead matriculated at the University of Zurich’s Faculty of Law, since “law covers so many areas of life.”

She enjoyed studying right away. She liked the professors and quickly made new friends. Exploring concrete cases and searching for justice came naturally to her. One day after a lecture, she caught the first glimpse of her future career when she attended a talk given by a diplomat. The work he describes appeals to her. It’s international, involves exploring complex matters, and requires good negotiation skills.

Looking for a just solution

After her studies, Schraner Burgener first completed an internship at the district court in Horgen, which was a requirement for taking the bar examination. She decided to stay at court longer than planned and took on the position of judicial secretary, which involved penning court decisions and opinions. As chair of the conciliation office for tenancy and employment law, Schraner Burgener did what she enjoys doing most: Looking for a just solution for all the parties involved in a conflict. “I didn’t want to become a lawyer, since I couldn’t picture myself representing only one side,” she says.

Instead of taking the bar examination, she decided to take the entrance exam to become a diplomat, or the “Concours” as it is called in Switzerland. “At some point I started to feel constricted by the district’s boundaries,” explains the diplomat. She passed the exam, along with her future husband Christoph Burgener. “We were delighted, since there were hundreds of candidates and both of us thought that we had failed,” says Schraner Burgener. Far from it, the two would later even go on to be the first couple to share a diplomatic post.

To this day, Schraner Burgener still benefits from her time at university, both professionally and personally. She’s kept in touch with her former professors, including renowned international law scholar Daniel Thürer. And some friendships have also lasted for decades: Last year, Schraner Burgener celebrated the 30th anniversary of her licentiate degree together with her former study group. The most prominent member of this group is former Federal Councilor Doris Leuthard, with whom Schraner Burgener has kept close ties ever since their time at university.

And what about her passion for playing the violin? The diplomat played in an orchestra for a long time, but unfortunately doesn’t have enough time anymore, even though she still enjoys playing the instrument. As United Nations Special Envoy, she splits her time between Bern, New York and South East Asia. The majority of her work happens behind closed doors and she doesn’t discuss details of the negotiations, her schedule or the political situation in Myanmar with journalists – this would compromise her mandate. What people see instead is Christine Schraner Burgener’s passion and her sunny disposition, while most of her hard work remains unseen.

Batoul Haydar commented on 30 January 2019, 18:52 LIGHTENING UP Dear Journalist, This article specifically gave me glimpse toward my dream which is studying at UZH and speaking up for rights... The title hopeless optimism captured me and how Ms. Burgener was delighted by music and arts and balanced between her job and her artistic passion.Her life story for others is watering a desert when it is actually a paradise.Thanks to this rare person that reached impossibilities while others were calling her story a myth... Sincerely, Batoul Haydar