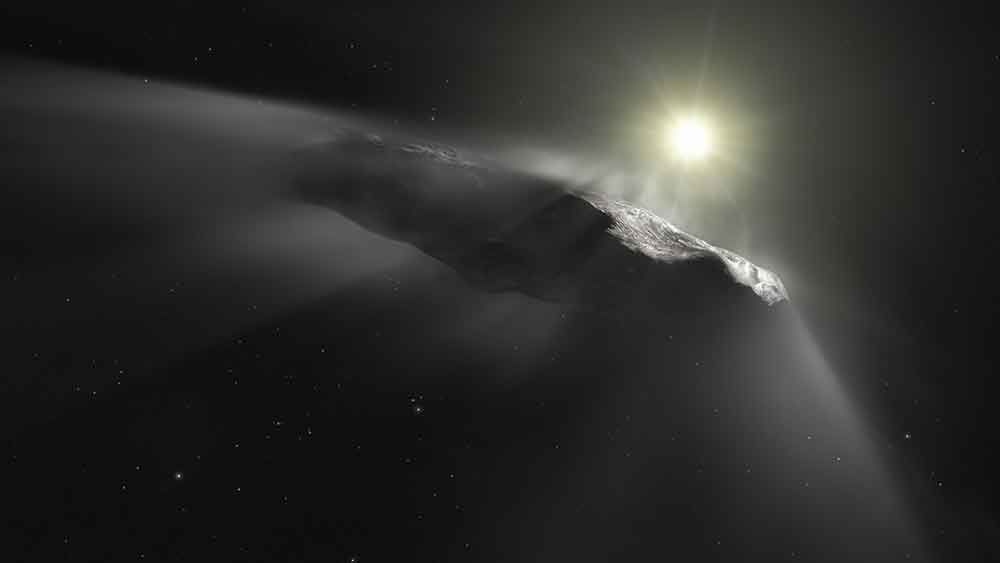 A strange cosmic object made headlines after it was discovered in October 2017. The cigar-shaped body named Oumuamua was the first known interstellar visitor of our Solar System. Many theories have been suggested to explain its origin, including the possibility of it being an alien spacecraft.

Using large computer simulations, researchers at the University of Zürich now show how Oumuamua-style objects can be produced. They calculated what happens when multiple young stars are born together in a stellar cluster – a similar environment to that in which our Sun was probably born 4.5 billion years ago. Planets, comets and asteroids form around these young stars when they are still in their infancy. “Coming into close contact with other stars can have a profound effect on these planetary systems,” explains Tom Hands, first author of the study and senior researcher at the Institute for Computational Science at UZH.

A video based on the simulations demonstrates what happens if two young stars in a cluster undergo a close encounter. Each star has a belt of so-called planetesimals, the building blocks of planets, like the Kuiper belt in the outer Solar System. When the two stars meet, the Kuiper belt of the smaller star is heavily disrupted by its higher mass sibling. “This causes a bunch of planetesimals to be ejected, flying away to become things like Oumuamua,” explains Tom Hands and adds: “I was surprised by the number of Oumuamua-like free-floating objects that can be generated in an environment like this on a relatively short time-scale.” Combined with other possible mechanisms to produce such objects, for the researcher it is clear that free-floating planetesimals, comets and asteroids should be ubiquitous in the Galaxy.

The simulations show that a close encounter not only sends objects hurtling through inter-stellar space, but some of the bodies are forced onto bizarre orbits or even captured by the passing star. Our own Sun was most likely formed in a similar environment some 4.5 billion years ago, meaning it might have undergone similar encounters. “I was also surprised by the ease with which stars can steal material from their stellar siblings at a young age,” says Tom Hands. So, our Solar System may contain alien comets that were stolen from another star in these early phases. “Even if alien material is really there, there likely isn’t much of it,” admits the researcher: “But we might be able to detect it based on the strange orbits this stuff could be on.” The results of the study also suggest that the existence of a ninth planet is not the only plausible explanation for the observed alignment of some objects in our Solar System. “People should keep an open mind when considering how these things might have ended up on the orbits they are on,” says Tom Hands.

For their computationally expensive simulations the researchers used the supercomputer VESTA at the University of Zürich running the calculations on a Graphics Processing Unit. The simulations were very challenging because the star cluster evolves over millions of years, whilst the planetesimals orbit their host stars in a couple of hundred years, meaning the calculations have to last for tens of thousands of planetesimal orbits. “In addition to this, things can get very messy when two stars and their planetesimals begin to come into close contact,” explains the astrophysicist. Previous studies considered only individual stars or planetesimals on very long orbits. “This is the first time we have been able to get a feeling for how the cluster environment could affect our Kuiper belt, or similar structures in exoplanetary systems”, concludes Tom Hands.

The Study has been carried out in the frame of the National Centre for Competence in Research (NCCR) PlanetS and is published by the journal MNRAS.