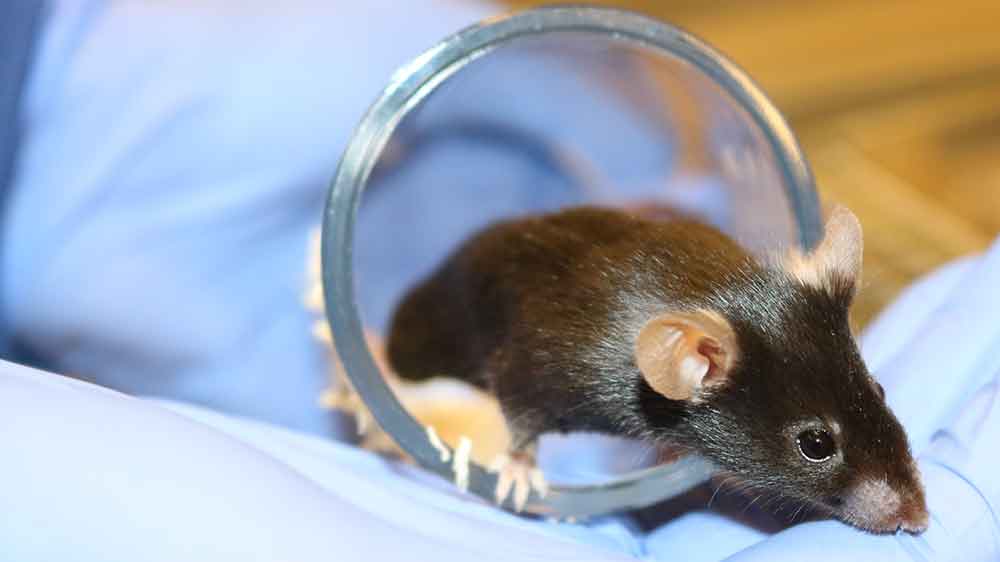 It seems that rats like having their necks tickled. When animal keepers apply a special tickling technique – imitating how young rats play together – the rodents relax and gain trust. This is a simple but effective measure, and just one of many that Paulin Jirkof has introduced at UZH to enhance animals’ well-being.

“If we work with animals, then only with as many as necessary and under the best possible conditions," explains the zoologist. These few words describe what she is aiming to achieve as 3R Coordinator, in which 3R stands for "replace, reduce, refine". Whenever possible, animal experiments should be replaced by alternative methods. If no alternatives are available, the experiments should be optimized to ensure that the animals are exposed to as little distress as possible. In Switzerland, researchers are legally obliged to keep animal experiments to a minimum. In its policy on experimental animal research, UZH undertakes to be stringent in implementing the 3R principles.

For a year now, Paulin Jirkof has been working to ensure that the 3Rs are more firmly anchored in research and teaching at UZH. This involves close cooperation with many people at UZH, including animal husbandry officers, animal keepers, study coordinators and scientists. Paulin Jirkof operates closely with UZH's two animal welfare delegates, Michaela Thallmair and Corina Berset, and statistician Bernadetta Tarigan.

The Department of Animal Welfare provides support to scientists in carrying out their animal experiments. Michaela Thallmair and Corina Berset’s main job is to review the applications for animal experiments before the scientists submit them to the cantonal veterinary office, while statistician Bernadetta Tarigan helps scientists to optimize the design of their experiments and advises them on how to draw relevant and informative statistical conclusions from their work.

At UZH, each R of the 3R principles is given a similar weighting. Many alternative methods have already been established, including computer simulations. And many researchers are working in parallel with several different approaches – some with and some without laboratory animals. There are frequent cases of research groups using cell cultures such as organoid models. According to Jirkof, promising developments are being made in organoid research: Organoids are three-dimensional, organ-like microstructures that are formed from animal or human stem cells, and since they have a realistic microanatomy they can be used as cellular model systems in the study of diseases. However, even highly complex cell cultures such as organoids are still not sufficient to completely replace a living organism. "Rarely can an alternative method fully replace an animal experiment," Jirkof summarizes.

Based on the latest evaluated data, the number of laboratory animals at UZH fell by 2.4 percent between 2016 and 2017. "However, it is difficult to say whether or not this is a sustained downward trend," Jirkof admits. Large veterinary studies on animal patients also count as animal experiments and could therefore increase the number of animals in the short term. Depending on which research priorities are set at UZH, sometimes more and sometimes fewer animals will be used.

Similarly, the number of higher-stress experiments held in the last three years at UZH has also decreased. But here too, Jirkof says, it is difficult to speak of a trend yet. With the revision of the Federal Food Safety and Veterinary Office’s severity guideline – a tool used to assess experimental projects – certain experiments will now be given a higher severity rating than in the past.

In areas where validated alternatives to animal testing are yet to be established, UZH researchers are investigating how they can reduce the number of animals they need to use. Approaches include optimizing the breeding of genetically modified mice or improving study designs. If researchers can make a better sample size calculation, the number of experimental animals can be reduced. The recently established online platform AniMatch offers another means of using fewer animals. With this platform, researchers can pass on unused organs or tissues from their experimental animals to other UZH researchers so that they are not required to procure their own animals.

The past year already saw several scientists contact Paulin Jirkof to request concrete advice on their projects and suitable 3R methods. Besides her advisory services, Jirkof wants to boost the transfer of knowledge between UZH researchers on existing alternative methods. "I spend a lot of time meeting with researchers," she says. It is important that 3R research is also initiated by the scientists themselves because, ultimately, they are the ones who are experts in their fields. 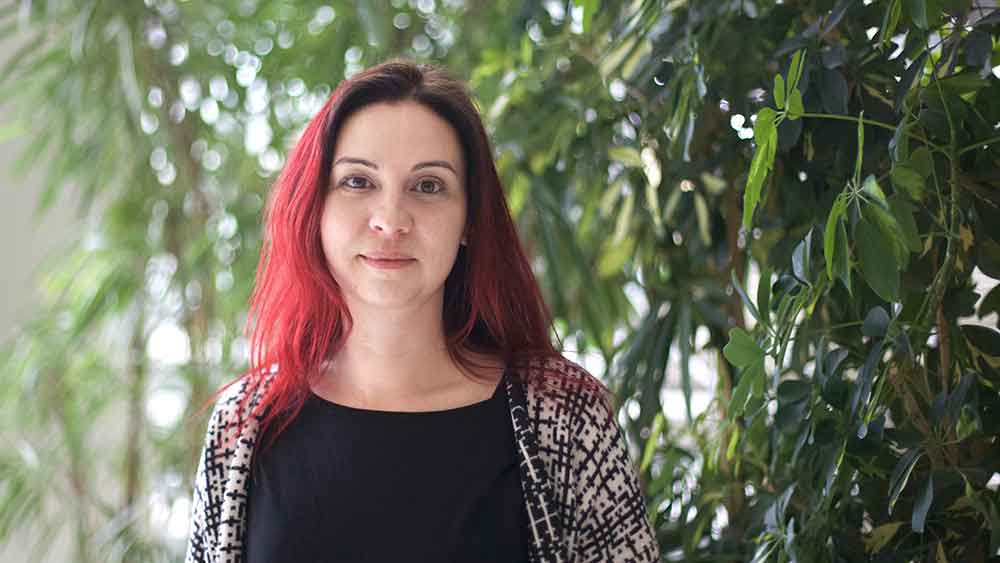 For a year now, Paulin Jirkof has been working to ensure that the 3Rs are more firmly anchored in research and teaching at UZH. (Image: Nathalie Huber)

For Paulin Jirkof, 3R is also to be understood as an openness to new research approaches and to promoting empathy towards the animal. She gives an example: How does it feel for a little creature like a mouse to be grabbed by the tail when being transported? By studying mice more closely, we can deal with them in a more species-appropriate way. Since free-living rodents move around in underground passages, researchers and animal keepers at UZH are shown that mice prefer to be transported in a tube rather than by hand. Many of them now use Plexiglas tubes to transport rodents. "It is clear that the animals are less distressed as a result," Jirkof explains.

The animal experimentation expert has experience of conducting research using animals from previous roles. She is specialized in pinpointing and assessing the pain and distress animals suffer during experiments. Avoiding or minimizing pain in animal experiments is not only important from an ethical and scientific perspective but is also required by law. However, it is not easy to recognize pain in animals like rodents because, as a prey animal, they avoid openly displaying pain and thus weakness. Researchers who work with rodents should therefore have the skills to interpret their behavior. Paulin Jirkof trains researchers in these skills and shows them how to recognize pain in mice by observing the alignment of their nose, ears and whiskers, for example.

In order to anchor and promote the 3R principles, they must be integrated into education. The Institute of Laboratory Animal Science at UZH organizes a substantial part of Switzerland’s education program for researchers who perform or lead animal experiments. "In every laboratory animal training course, 3R is an integral component," Jirkof confirms. She recently participated in an international research project and, together with participants of laboratory animal training courses, tested a number of fixing and injection techniques on mouse and rat simulators. "We have now purchased a few simulators ourselves and are incorporating this training into our blood-taking courses," Jirkof says.

Last year, Paulin Jirkof mainly offered courses for young researchers from medicine, veterinary medicine and the natural sciences. In addition, she taught the 3R principles in courses on research ethics. But, in the future, she wants to incorporate the 3Rs more firmly into teaching – at both Bachelor and Master level. "Students should be informed about the 3R principles as early as possible," she says.

Cooperation at the Competence Centre

In hiring Paulin Jirkof, UZH is the first university in Switzerland to employ someone exclusively to promote the 3R principles in research and teaching. In the meantime, eleven Swiss universities now have 3R officers working for them. All belong to the 3R Competence Centre Switzerland (3RCC), which was founded by the universities, the Federal Food Safety and Veterinary Office, Swiss Animal Protection and the Interpharma industry association.

Paulin Jirkof has recently been appointed co-chair of the 3RCC executive board. Collaboration with colleagues at the Competence Centre is very close and constructive, as this is where different research expertise and focal points converge. Together, the 3R coordinators are planning to develop a national education strategy for Bachelor’s and Master’s students. Paulin Jirkof also believes in the importance of addressing researchers who are not directly involved in conducting animal experiments but who have relevant specialist knowledge that can be used to develop alternative methods.

Besides collaborating on a national scale, networking with 3R centers and 3R experts around the world is also important. "We are building up an extensive international network too, for it is precisely the international transfer of knowledge on 3R methods that is so important if we are to implement alternative animal-free methods more effectively," Paulin Jirkof stresses.

Animal welfare and 3R at UZH

The law, the ethical guidelines relating to Swiss higher education, as well as the "University of Zurich Policy on Experimental Animal Research" require that animal experiments be limited to the necessary minimum by reduction or replacement and carried out as gently as possible (3R). The Department of Animal Welfare, consisting of animal welfare delegates, a biostatistician and the 3R Coordinator, supports UZH members in implementing these guidelines.

Collaboration with the Competence Centre

The 3R Competence Centre Switzerland (3RCC) was founded in March 2018 by the Federal Food Safety and Veterinary Office, eleven universities and institutions of higher education, Swiss Animal Protection and Interpharma. The mission of the 3RCC is to promote the 3R principles (the replacement, reduction and refinement of animal experiments in Switzerland) and to facilitate their implementation in the biosciences.

The 3RCC funds 3R research projects. On the occasion of the first funding round, UZH submitted ten projects.

Research with animals at UZH