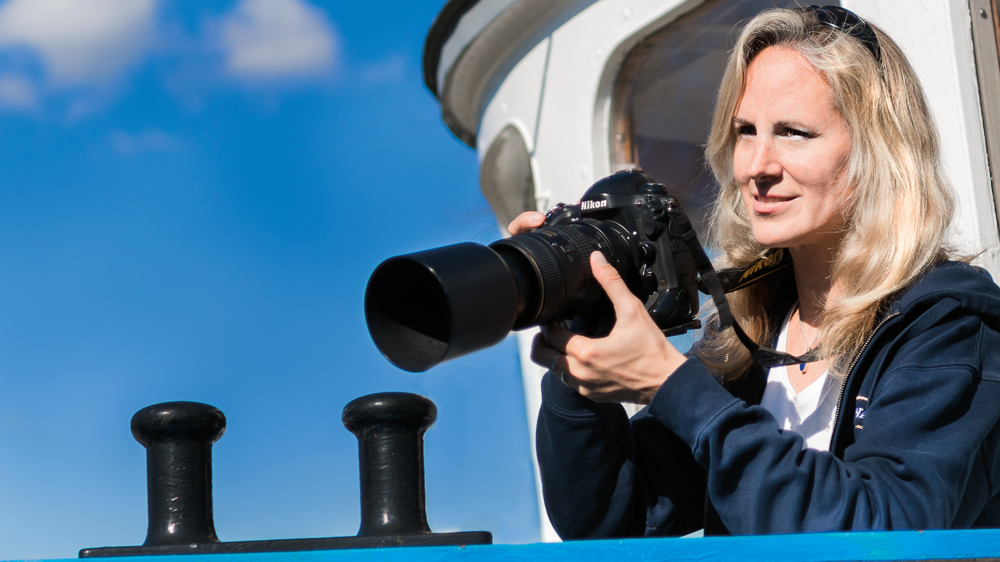 ziltener
In action: Angela Ziltener takes pictures to document the dolphin’s dorsal fins, by which individual animals can be identified. (Image: Frank Brüderli)

Angela Ziltener isn’t in Zurich for long. Soon she is returning to Egypt, where she will share her expertise on dolphins at a workshop for trainee diving instructors. At our meeting on the lakefront, Angela tells me she has felt a magical attraction to water since she was a child. Her other passion is animals. It was after seeing her first wild dolphins in Florida at the age of nine that her dream to become an animal scientist was born.

During her studies at the University of Zurich, the budding biologist spent several months in Vancouver on the Canadian Pacific coast studying killer wales, or orcas. She started diving and then each year travelled to the Red Sea – whose clear waters make it a divers’ paradise.

The marine biologist has been living on the Red Sea since 2009. She spent the first few years in the Egyptian tourist town of Hurghada, and in 2015 moved to El Gouna, to the first holiday resort built by Samih Sawiris. As an academic associate of the Anthropological Institute and Museum, she is still linked to the University, where she first wrote her Master’s thesis on primates under Carel van Schaik. Today she is based mainly in El Gouna, where the Technical University of Berlin has a campus.

“The Red Sea is one of the few places where the life of dolphins can be explored by diving,” Ziltener enthuses. Over the years she has documented over 200 Indo-Pacific bottlenose dolphins (Tursiops aduncus).  Since each dolphin can be identified by its own individual dorsal fin, Ziltener gives them a name too. When watched from a boat, the dolphins are only briefly visible when they come up to breathe. Much of their mysterious underwater life is still unknown.

The tourist industry long ago spotted the chance to discover wild dolphins by diving. “In recent years it has reached a level that endangers the dolphin populations,” warns the researcher. Tourist boats take divers and snorkelers directly to dolphins that are resting. After their nocturnal expeditions hunting for food in the open ocean, the animals look for sheltered lagoons in coral reefs near the coast, which is where the mothers also suckle their calves.

Together with Red Sea representatives of the Egyptian government, the Swiss scientist campaigns for the protection of dolphins and for respectful diving tourism. But she is aware that much more education is needed. And the state, too, must perform its role in establishing protected zones for these intelligent mammals. If the diving and snorkeling tourist industry isn’t regulated, it will destroy its own basis.  To coordinate activities, Angela Ziltener and friends founded their own organization in 2011, known as the Dolphin Watch Alliance.

This has enabled the marine biologist to observe dolphins on a total of over 1,000 dives. As a result, she has learned that every animal has its own personality. One experience with a young female dolphin she named Dandy left a strong impression. The two had met for the first time a few years earlier. Then, reaching adulthood at an age between 10 and 12 years, Dandy gave birth to her first calf. When Angela Ziltener saw the young dolphin for the first time, it was as if the mother dolphin was genuinely proud to be able to present her offspring to her. It was a male calf, and was given the name Daniel.

Working with the BBC

Angela is investigating another – still unexplained – behavior common to dolphins: rubbing their bodies against a specific soft coral.  “It is possible that the gorgonians contain antibacterial substances,” she explains. However, the Egyptian authorities have yet to grant permission to take coral samples for testing, which would be required to prove the existence of such substances. Reporting on this at a scientific conference in Belgium in 2014, Ziltener was brought to the attention of BBC staff. This led to the opportunity for the dolphin expert to advise the British filmmakers during the filming of the new “Blue Planet II” documentary series. She has also worked with ZDF animal filmmaker Hannes Jaenicke and the “Einstein” team at Swiss television.

Working to protect dolphins and their habitat takes up a lot of her time, which is why there is currently little left for her research activities. Genetic studies on dolphins in the Red Sea would also be interesting. “It would, for example, be fascinating to investigate whether the animals that live closely together are also related to each other,” Angela Ziltener says. This would lead to links with research at the Anthropological Institute, as Michael Krützen is currently examining the genetics of the same dolphin species in Western Australia.

This text was first published in the latest UZH Journal 2/2018.