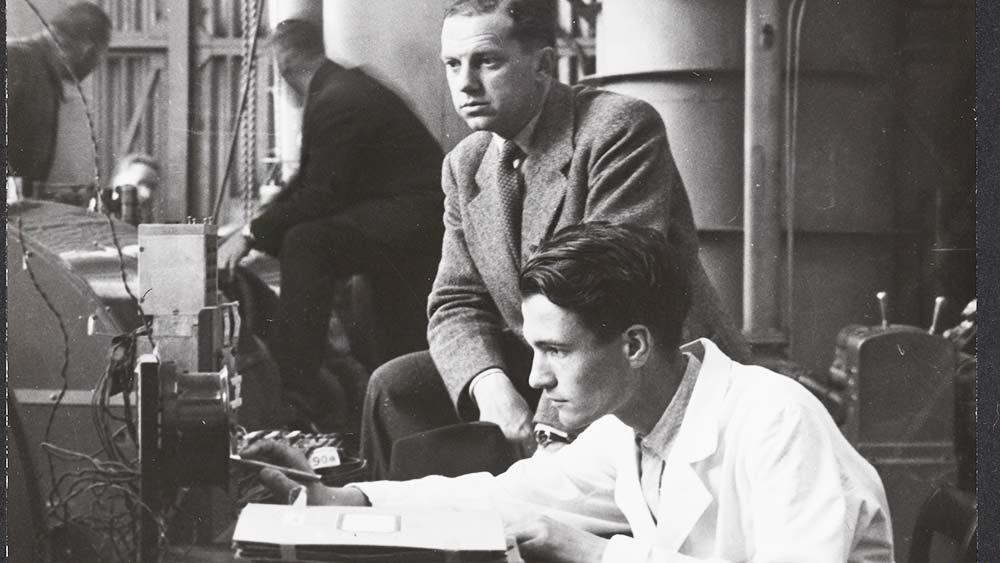 Hans Stierlin developed the "people's fridge" in his mid-20s while working as a research engineer for the company Escher und Wyss. The picture was likely taken in 1943 (Picture: Archives of Contemporary History)

For many years, only the privileged few could afford to buy a refrigerator. It wasn’t until the 1950s that the first “people’s fridge” produced by the company Sibir became affordable for the masses. Sometimes described as the refrigerator revolution, the new-found ability to preserve and cool food fundamentally changed the grocery-shopping habits of people in Switzerland.

But for Hans Stierlin, founder and managing director of Sibir, the word revolution also had another, quite different meaning. This is because Stierlin belonged to a small group of Swiss Trotskyists who were hoping that communism would ultimately prevail in the world – and they did so in a time and place where such views weren’t exactly en vogue, to say the least. An ironic twist that Stierlin, the businessman considered a pioneer of mass production thanks to his fridge factory in Schlieren, should be opposed to capitalism.

His story is one of the stories told in a new book, which was recently presented during a book launch event at the Archives of Contemporary History of ETH Zurich. The book, called Archive des Aktivismus. Schweizer Trotzkist*innen im Kalten Krieg, includes 10 chapters which for the first time provide an in-depth look at this small but influential political movement.

The story of Stierlin covers a little known aspect of the Cold War era. As an entrepreneur, Stierlin tried to realize his political views in his own company. He made sure that his employees were paid better wages and worked shorter hours than the employees at his competitors. On several occasions he also hired political activists, one of whom had even previously been convicted of terrorism.

The success of his company Sibir is likely also owed to the fact that Stierlin was more of a pragmatic than a dogmatic. He knew exactly how far he could go before his political activism, which was a delicate subject in that particular era, would affect his company in any significant way. For example, this meant that his employees never held any real sway in the company, and his female staff always earned less than their male colleagues.

From seminar to book

The book isn’t only remarkable for its surprising, carefully penned and beautifully illustrated contributions but also for how it came to be: The book started out as a seminar at the Department of History of the University of Zurich. According to Professor Monika Dommann, initially there was no plan to write a book at all: “We weren’t focusing on this particular topic, either”. Rather, two years ago newly accessible archive holdings caught the attention of the historian and her colleagues.

Back in late 2016, students taking part in a seminar rummaged through a mountain of files and documents, meeting once a week in the Archives for Contemporary History to discuss their progress. The students then focused on different topics and developed their own ideas, about which they then wrote a variety of term papers. “Instead of reading text after text, the students learned by performing research,” explains Dommann.

This is par for the course and nothing exceptional, but for once the term papers didn’t end up simply being filed away in a drawer.  “We thought that we should to make something out of all this work,” says Dommann. When the publishing house intercom was founded last year, they quickly realized that they had found the right partner for their book: The not-for-profit group also publishes the Aetherseries, which aims to make student research accessible to a wider audience by making it more readable, adding attractive illustrations and ultimately publishing it. The book about the group of Swiss Trotskyists is the second publication of the series.

No ECTS points, no problem

Turning seminar papers into appealing, easy-to-read stories required a great deal of commitment from the students and was not going to be rewarded with further ECTS points. And yet, most of the students in the seminar were happy to take on the additional work. History student Nicolas Hermann, who went through some 30 boxes of documents to pen the story of Hans Stierlin, says: “It was fascinating to be involved in developing a book and to see how time-consuming this is.” It took him about 30 to 40 hours to rewrite his article. He was also one of the book’s three editors, which gave him first-hand insights on how much work goes into publishing such a book.

The book is an excellent example of what a university seminar can achieve. And the project has made an impact on those involved. Hermann, for example, has decided to write his Master’s thesis about the company Sibir next year. And Professor Dommann is already thinking about the next practical seminar, which will focus on the new economy. She wants to investigate the early stages of start-up businesses together with students. She is currently looking for companies that are willing to open up their corporate archives for such a project.