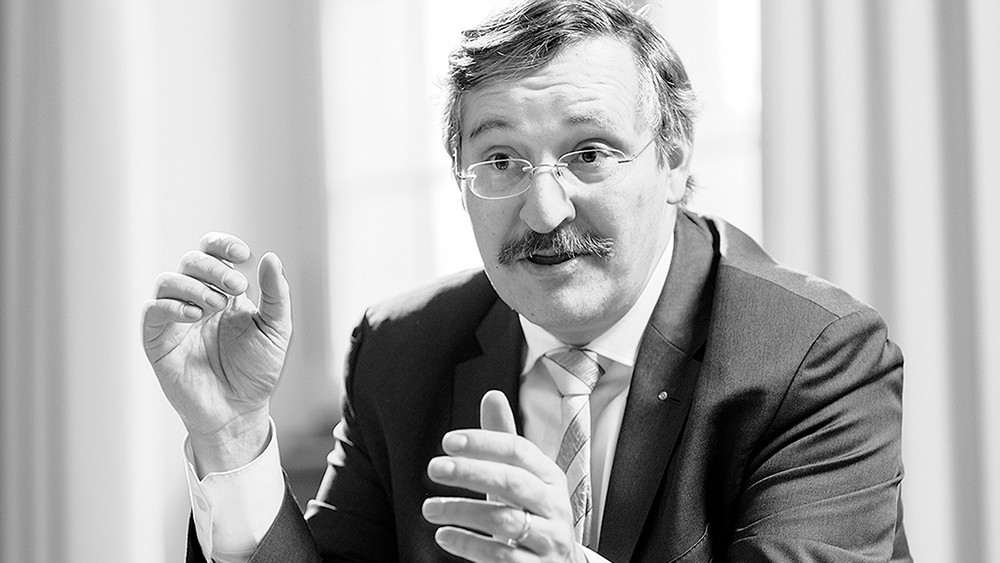 Michael Hengartner, swissuniversities was founded in 2015 as the umbrella organization for Swiss higher education institutions. You have been president since 2016. What has been the highlight of your first two years?

Michael Hengartner: I think it’s great that the three previously independent groups representing the different types of higher education institutions in Switzerland were able to find common ground so quickly. Before 2015, there were separate umbrella organizations. Now, thanks to swissuniversities, we have regular opportunities to exchange views, which in turn means that our mutual understanding has grown. The universities (Universitäten), the universities of applied sciences (Fachhochschulen), and the universities of teacher education (Pädagogische Hochschulen) now see themselves as partners in the Swiss higher education system and speak with one voice. That’s a big advantage.

It has enabled us to find solutions for issues that were previously controversial. For example: swissuniversities is now supporting an initiative whereby the universities of applied sciences and universities of teacher education will be able to award doctorates based on cooperation with a Swiss or foreign university. We plan to run pilot projects until 2025 to gain experience in this area. It’s unlikely that a solution would have been reached without the mutual trust that the various institutions were able to establish thanks to swissuniversities. Another significant benefit of swissuniversities is that by presenting a united front, we gain credibility in the political arena. In its two years of existence, swissuniversities has established itself politically as a key stakeholder.

Has that led to specific successes?

Yes, we were able to succeed in convincing the Federal Council and the Parliament that investment in education is of central importance. Switzerland is in a leading position when it comes to innovation and competitiveness – but investment in education and research is vital if we want to maintain this edge in the future. The Swiss Parliament even pledged more resources than were requested by the Federal Council to support education, research, and innovation from 2017 to 2020 – that happens very rarely. One year later, the Federal Council again wanted to make cuts, which the Parliament again corrected. The higher education institutions are of course willing to contribute to reducing costs. But it’s important that we are able to depend on secure financial planning for several years into the future.

A big challenge when you came into office was the relationship between Switzerland and the EU. In the meantime, Switzerland has been readmitted to the Horizon 2020 research program, but Swiss universities are still excluded from the Erasmus+ program. So, a mixed result?

Yes, indeed. The impact of the mass immigration initiative continues to be felt and Switzerland’s relationship to the European Union is still not clear. Participation in the follow-up program to Horizon 2020 is far from guaranteed – it could be another nail-biting negotiation. It’s also important for Swiss universities that they gain full access again to the Erasmus plus exchange program at least from 2021. The current transition solution of bilateral agreements between individual universities is causing an enormous administrative workload.

What impact will Brexit have on the area of higher education?

There are long-standing ties between Swiss and British universities. Brexit means that it will be important to foster even closer links, for example with joint research projects and education programs. I believe that we will manage to do that, because it is in nobody’s interest to break off relations as a result of Brexit. British universities might want to build even closer relationships with Swiss universities because both countries will be outside of the EU.

What other challenges are the Swiss higher education institutions and therefore swissuniversities facing?

One big challenge is digitalization. On the one hand, society is looking to universities to provide answers to the questions raised by digitalization: How can we ensure that Switzerland benefits from digital developments? How can we best support those who stand to lose out? Will privacy and data protection still be guaranteed? On the other hand, digitalization poses a challenge for the higher education sector itself: What form will research and teaching take in the future? It’s pointless for each institution to individually reinvent the digital wheel, instead we should learn from each other – that’s where swissuniversities comes in.

What other topics is swissuniversities concerned with?

A big challenge is Open Science, that is free access to academic findings. Germany and the Netherlands are pioneers in this area, and have begun negotiating with the major academic publishers. We still have to do that and it won’t be easy. Currently only about a third of research findings from Switzerland are freely accessible – we want to make that 100 percent. It has to be made clear to the big publishers: That which is publicly funded must also be publicly accessible for free.

Do you have a possible solution in mind?

It would make sense if researchers paid to publish academic papers rather than to read them. That would be a fair, sustainable business model.

If you could have one wish granted for higher education in Switzerland, what would it be?

I would wish for more academics to get involved in politics. Academia is under-represented in politics. It would be beneficial all round if that changed: Researchers could bring a fact-based analytical approach to problem-solving and at the same time, their involvement in political bodies would mean they were more attuned to the concerns of the society that they are meant to be serving.

Your term of office as president of swissuniversities comes to an end this year. Are you going to stand for a second three-year term?

Yes, I would like to put myself forward again. I think it’s good to have a certain degree of continuity. As president, I’ve been able to forge many positive relationships and gain trust. I’d like to make the most of that to continue representing the interests of higher education in Switzerland.