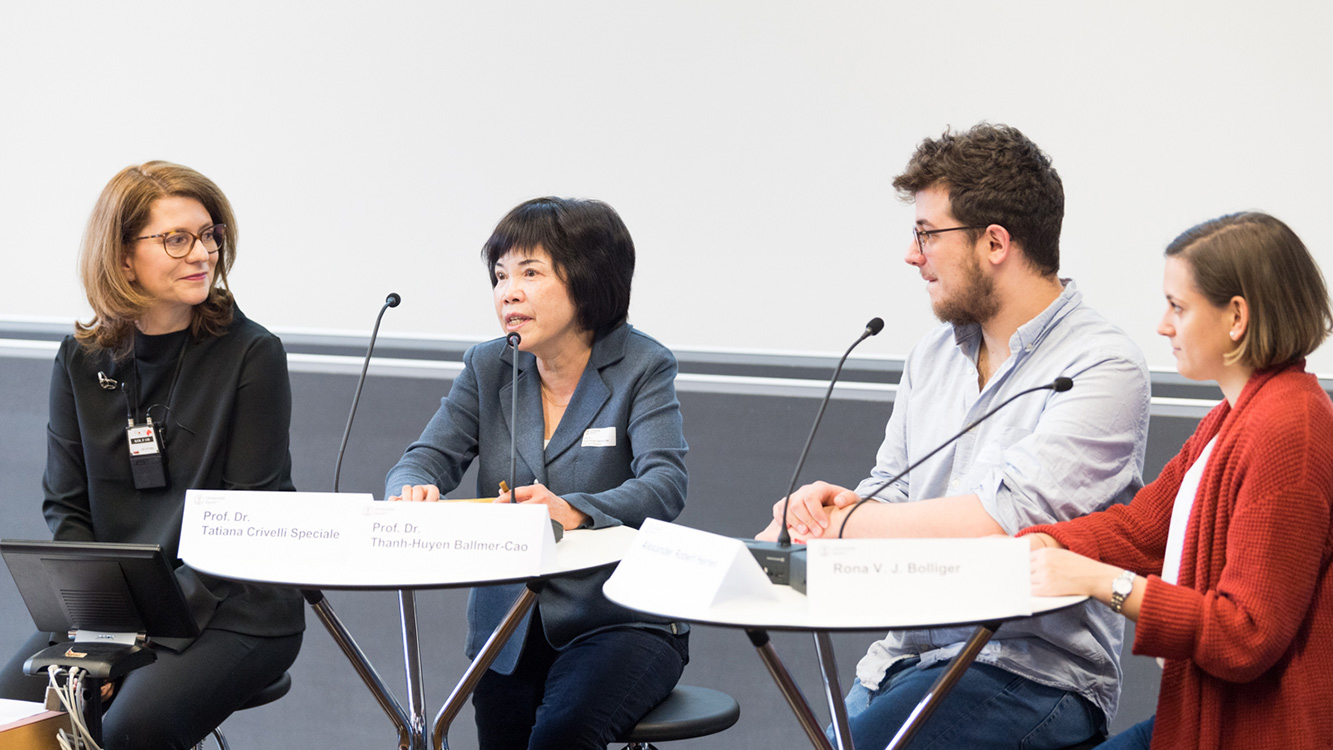 What has been achieved in the last 10 years in terms of gender equality in higher education, and what will the next generation of students expect? These were the questions tackled by professor emerita of politics Thanh-Huyen Ballmer-Cao and UZH students Rona Bolliger and Alexander Herren at the annual reception for female professors held this week. Ballmer-Cao is former president of the Gender Equality Commission at UZH, while Bolliger and Herren are committed to furthering the cause of gender equality through their work for the University of Zurich Student Association (VSUZH).

Thanh-Huyen Ballmer-Cao is one of the pioneers of gender equality at UZH. She recalled how things got going 20 years ago by way of an anecdote: “Back then it was all still very informal, we had no statutes or outlines of rights and responsibilities,” said Ballmer-Cao. Personal contacts were therefore very important. “I knew that the former UZH president Verena Meier always took a coffee break at 10am. So I stood myself by the coffee machine at 10, approached her, and asked her to put in a good word for us. Nowadays I’d probably be accused of stalking or harassment,” said Ballmer-Cao with a wry smile. While the former president didn’t  commit to anything, her successor Hans Heinrich Schmid later said: “Verena Meier told me she didn’t see the need for it, but asked me anyway to throw my weight behind the Gender Equality Commission.” And so everything began to come together.

Twenty years later, a lot has happened: Out of those early informal get-togethers an official body dedicated to furthering gender equality at UZH was formed, said current president of the Gender Equality Commission, Professor Tatiana Crivelli Speciale, who chaired the panel discussion. Christiane Löwe, head of the Office for Gender Equality, confirmed this assessment and outlined the university’s plans for 2018, for example, the launch of projects under the national government-funded program for equal opportunities and higher education development, or the Diversity Policy that was currently being drawn up. These measures would help to raise awareness of the legal provisions on inclusion and anti-discrimination, and to ensure that such provisions could be even better implemented, said Löwe.

At this point, Alexander Herren cut in, saying that it was important to show commitment to furthering diversity. However, it was also necessary to monitor whether such measures were actually making a difference to people facing discrimination on multiple grounds, otherwise the measures amounted to nothing more than “pinkwashing”, adopted by universities for strategic reasons. In addition, he declared he was an advocate of quotas.

Throw their hats into the ring

Rona Bolliger said that many students today had very conservative views, even with regard to equal opportunities. The core problems of equality between the sexes had still not been solved today, postulated Ballmer-Cao, before the discussion was opened to the floor. Margit Osterloh, professor emerita of business administration, said that a lot had changed in recent years. There was an article on gender in the University Act, and there were more female PhD candidates and students – discrimination had long since ceased to be such a problem as previously. She said she was getting tired of hearing women playing the role of victim. “Why don’t women throw their hats into the ring and have the boldness to step forward?”

Rona Bolliger countered that there were still big differences – in particular in science and engineering subjects, where there were few women. On the other hand, there was also the Vetsuisse Faculty, for example, where women made up a clear majority. For Bolliger, schools also had a role to play in getting more girls interested in science. Alexander Herren said it began as early as primary school: “Gender roles are defined very early on.”

Regula Kyburz-Graber, professor emerita of upper secondary teacher education, proposed a solution: If there were more part-time working options for both men and women, more women would be interested in professions that were currently male dominated.

Rosmarie Michel, permanent guest of honor of UZH and former president of the Zurich Women’s Association, summed up proceedings: A phenomenal amount of progress in gender equality had been made in the last 50 years. Women were not frail creatures needing protection, but could stand up for themselves and would continue to fight for greater equality in the future.