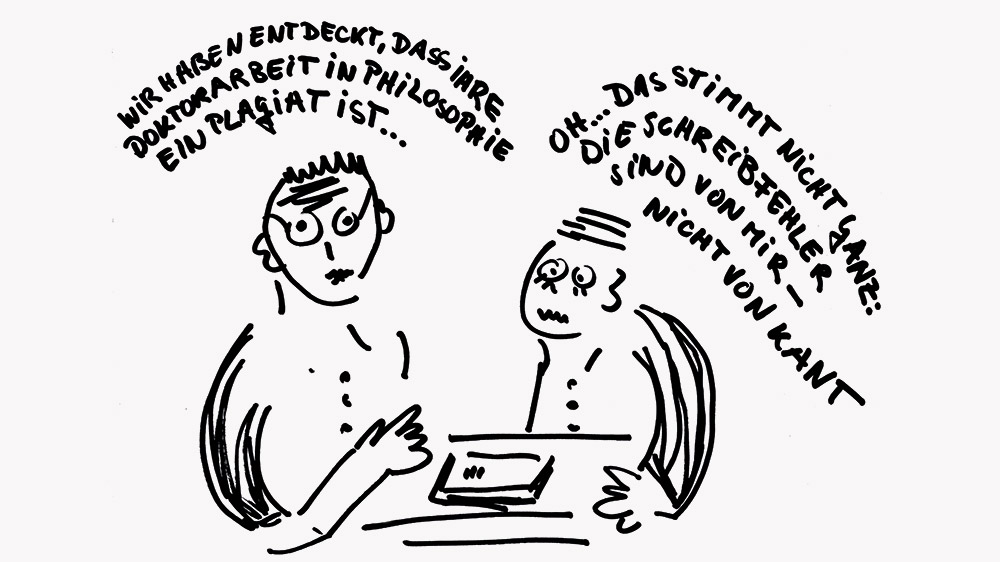 Text theft is a common occurrence, but it is far from a trivial offence in academia. It is imperative that academic work be checked for unmarked citations, not least since the plagiarism scandal of Karl-Theodor zu Guttenberg, who resigned as German defense minister and was stripped of his doctor title when it emerged that he had plagiarized his dissertation. Checking academic work is thus only fair, since the vast majority of students at UZH acquire their degrees through hard work and devotion – and not by copy-pasting.

Members of the teaching staff at UZH have already been using plagiarism detection software for a few years. Now the Executive Board of the University has decided to purchase a new software program to replace the previous tool, which was becoming outdated. At the same time, a new guideline has been introduced, according to which all Master’s and doctoral theses that are published on the Zurich Open Repository and Archive (ZORA) platform must be run through the new software.

Bachelor’s thesis and papers can also be scanned for plagiarism, but doing so isn’t mandatory. “When it comes to Bachelor’s theses or coursework, it’s up to the faculties to decide what makes sense,” says Franziska Moll, legal associate in the Office of the Vice President Education and Student Affairs and responsible for purchasing the new software. “It’s important that the faculties make it clear how they handle plagiarism, and it would make sense for them to explain the process on their websites.”

Data protection and authority over data

The new software introduced at UZH was developed by the firm PlagScan. One of the major advantages is that it uses an in-house set-up that keeps all of the information that is fed into the software on UZH servers. In other words, UZH maintains its authority over the data, since it is not stored on any external servers. This means that the members of the teaching staff retain full control of the documents and can delete the information after they’ve reviewed it – without leaving any data traces on the internet or elsewhere.

Sharing a document with someone else is only possible if explicit permission is given. And the new tool is also fast: It can scan a 30-page document in a matter of minutes. But it’s also possible to feed it with 100 papers at the same and let it work over night, and the results will then be available in the morning.

The program highlights sections that are a match with other texts, adding links to the relevant sources. Its algorithm is based on units of three successive words, which enables it to also detect clear matches in cases where sentences may have been rephrased or synonyms used. After detecting the matches, the software applies an intelligent filter to avoid flagging sections that are clearly unproblematic.

This includes direct citations, insignificant minor matches and anything added to a list by the instructor to make sure the results are as informative as possible. Sentences such as “The sun rose over the mountains of Switzerland” have probably already been written many thousands of times, and do not constitute plagiarism. The same goes for standard phrases, such as those often used in legalese. “The software flags up everything, but this shouldn't unsettle students,” says Franziska Moll. “Nobody has to fear accusations of plagiarism because they’ve used a standard phrase in their paper.”

One thing the new software is still unable to do is detect translation plagiarism, for example if a section has been translated from a Russian or French text. However, since the instructors are familiar with the international literature, they’ll quickly notice if something has been lifted straight from a foreign-language text. This is where the expertise and experience of the teaching staff come into play. When dealing with possible cases of plagiarism, it’s always necessary to address a number of questions.

Franziska Moll points out that, if somebody is suspected of having plagiarized, the first priority is always to talk to the instructor, who should also try to take account of the suspected plagiarist’s situation. For example, it could be that the student has worked chaotically or has failed to grasp the rules for citing other people’s work. Plagiarism can result in a transcript of records being withheld or the student being excluded from the course. In severe cases of plagiarism that involve fraudulent intent, the Faculty Assembly is tasked with deciding whether to initiate disciplinary proceedings.

The new plagiarism detection software takes into account billions of sources, says Moll – which was another reason to purchase the PlagScan software. There are still a few publishers that don’t want to open up their works to plagiarism software companies. Here, too, PlagScan is working towards acquiring the relevant licenses.

This article was first published in the UZH Journal No. 3, September 2018