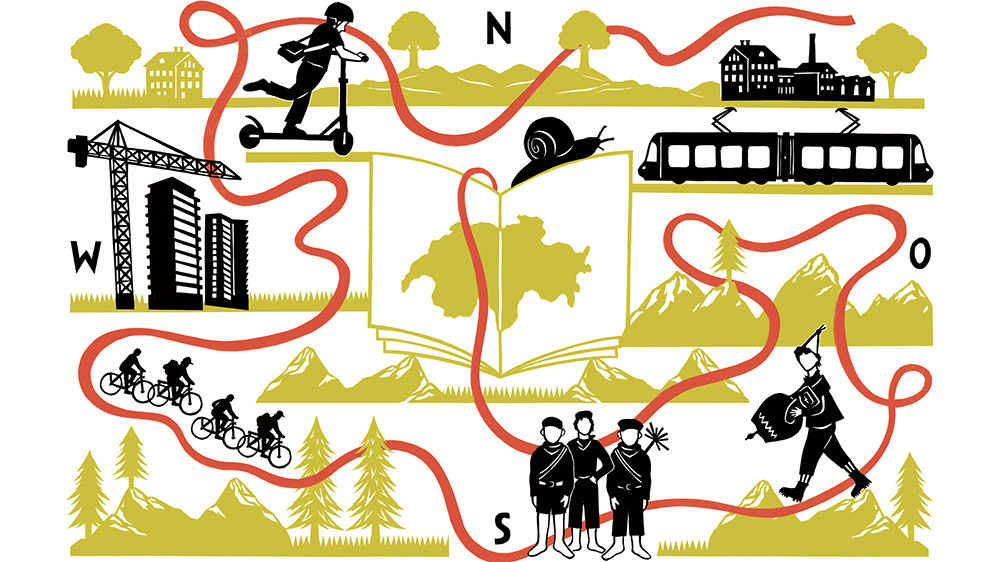 Ich bin eine Bildlegende (Illustration: Laura Jurt)
Schellenursli and other Swiss children's literary characters: This illustration by Laura Jurt is one of 20 featured in the Atlas der Schweizer Kinderliteratur.

According to a popular children’s tale, when the sky takes on a reddish hue in the run-up to Christmas, it’s because the angels are busy baking Christmas cookies in the heavenly workshop. Some children even claim to catch a glimpse of the elusive Christkind – the angelic child who brings Swiss children their Christmas gifts.

Such magical stories aren’t restricted to the festive season. Swiss children’s literature encompasses a wide and diverse range of themes and stories, as the Atlas der Schweizer Kinderliteratur shows. The book is made up of 20 essays and academic texts written by various authors and covering different aspects of literary works from the past two decades aimed at children and young adults.

Each text is preceded by an illustration, giving the book its structure. Made by brush, pencil or scraping tool, the illustrations translate aspects of the texts into imaginary worlds. Each of the 20 images thus demonstrates the diverse nature of the illustrators scene in Switzerland.  The creative images allow readers to explore each text in a new and playful way.

The atlas is aimed at a broad readership that includes specialists such as teachers and linguists as well as interested parents, who will find information and inspiration from the vast world of children’s literature. Readers can discover new stories or revisit familiar tales with fresh eyes. With its wide range of topics, the book serves as a compass on the journey through the diverse literary landscape aimed at children. 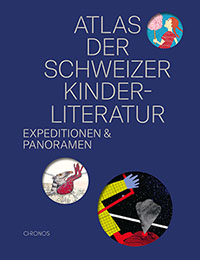 In her essay, Elisabeth Eggenberger, who helped to develop the book, writes about recent changes in Swiss children’s literature. “In the past 20 years many publishers for children’s and young adults’ books have closed or moved abroad. The market for literature has become more international,” she says.

Swiss authors have more and more had to turn to publishers in Germany, which has had an impact on the stories told. For example, Eggenberger has observed that references to real geographical places have dwindled over the past few years. It’s more and more the case that stories have to work without including actual place names. “A story is therefore more likely to take place on a neutral mountaintop than on the summit of the Jungfrau mountain,” explains the children’s literary critic.

She also mentions another reason why real places have become less important. Changing educational ideas in the 1970s meant that the individual became more important: “The focus is now often on the emotional needs of a child,” she writes in her essay. The focus has thus shifted from the outside world to what goes on inside a child’s mind. “The psychological aspect of novels has become more important,” says Eggenberger. These focus more on topics such as the search for identity – who am I? Where do I belong?

Breaking out into other worlds

In another of the book’s chapters, literature expert Christine Lötscher provides an academic view of the role of fantasy worlds in children’s stories. Made-up stories give children an opportunity to live out their own imagination, to explore different worlds and try out new roles. “Children have to be able to go on adventures in their everyday lives and explore the wild, crazy, mysterious and magnificent things that push in from the world of fantasy, dreams and the unconscious,” writes Lötscher, referencing Franz Hohler’s story Tschipo. In the story, the line between dreams the real world become blurred when Tschipo brings a live penguin he dreams about into the real world.

Similarly, the tale about the busy little angels in the heavenly workshop also gives children the chance to explore the boundaries of what’s possible. And many adults might also wish they could re-experience this magic through children’s eyes.

The Atlas der Schweizer Kinderliteratur explores the world of Swiss children’s literature in 20 chapters based on popular and lesser-known, unusual and innovative children’s books from the past 20 years as well as selected classics. Every chapter begins with an imaginary map. The pictures provide insights into the diverse illustration work currently being done in Switzerland.

The Swiss Institute for Children’s and Young Adult Books (SIKJM) is an associated institute of the  University of Zurich, with offices in Zurich, Lausanne and Lugano. The institute is sponsored by the Johanna Spyri Foundation, and its academic advisory board includes several UZH professors.

Batoul Haydar commented on 4 January 2019, 23:51 A Teenager with a Child's vision That's what exactly our universe starves for! I had the same imagination in my childhood creating fictional characters to help me get rid of my fears.So that is why I am totally living in a fairy tale eventhough I am not a baby anymore... Unfortunately people might go to logical ways in treating creatures that can only understand a cry and a hug.