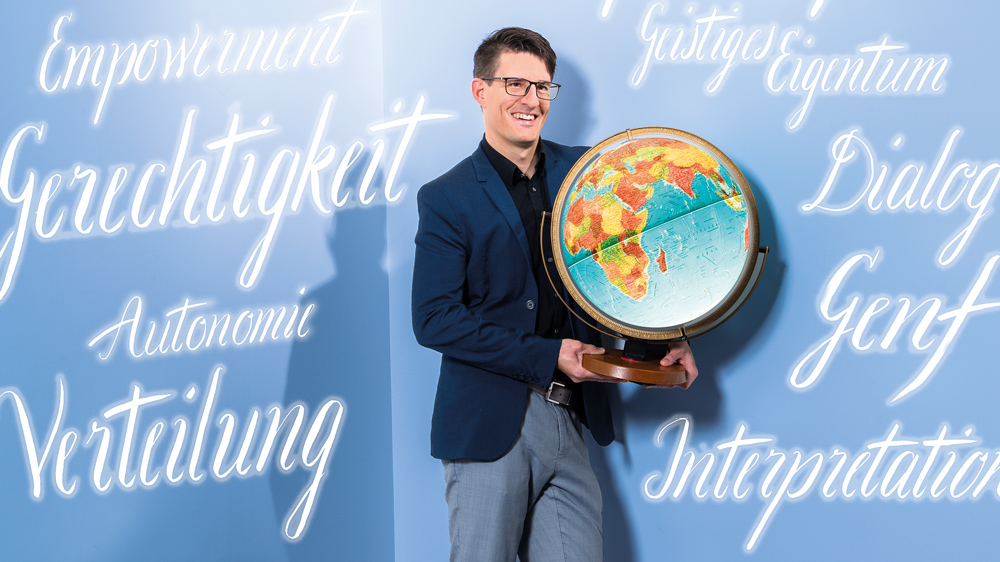 Philosopher of law Johan Rochel is on a mission: He wants to make the world a fairer place.  The question of fairness has been fueling his academic work and his commitment to a wide range of social causes for quite some time already. After graduating from high school at the age of 20, he left the Canton of Valais, where he grew up, to study philosophy and political science at UZH and in Lausanne. His aim was to find an answer to one of the big questions: What do we have to change if we want to make society fairer?

Of course, you could argue that increasing fairness across society is a relatively trite cause – after all, who’d be opposed? But the more important question is this: What can a single person actually do to change the course of the world? Most of us would shrug and resign ourselves to the fact that there’s not much we can do and that it’s up to the rich and powerful.

But Johan Rochel isn’t that kind of person. He’s never let the fact that as individuals we’re powerless get in the way of his desire to change the state of the world. This is why alongside studying, he has always been committed to a number of social causes – such as working in an asylum center or for the information platform humanrights.ch. And he’s also published books such as Die Schweiz und der Andere: Plädoyer für eine liberale Schweiz or Migrationsland Schweiz: 15 Ideen für die Zukunft.

Rochel’s latest project is Ethix, a start-up that tackles ethical questions around innovation and advises businesses. His commitment and dedication is rooted in his academic work, as Rochel is not only a trained political philosopher, but also studied international and European law under renowned international law expert Walter Kälin, among others. “His lectures made me realize that there’s a great deal of philosophy in law.” And: The law is more effective in terms of making an impact.

“When it comes to shaping institutions it’s all about power,” says Rochel. This means that a lawyer holds more sway than a philosopher. Sooner or later any policy we negotiate has to be molded into a legally binding text if it is to be permanent. So it’s only logical to combine philosophy and law, which is exactly what Johan Rochel is doing, describing himself as a philosopher of law.

Armed with this label as well as a clear mission, he got started on his habilitation project, which is supported by the Research Talent Development Fund (Fonds zur Förderung des akademischen Nachwuchses, FAN). He is examining the Agreement on Trade-Related Aspects of Intellectual Property Rights, or TRIPS. This agreement governs intellectual property rights at the global level.

The ideas and innovations it helps protect are a tremendous source of wealth,  and Rochel believes that this wealth is not distributed fairly enough. This is because TRIPS mirrors the unequal relationships between the partners or, more precisely, the power imbalance between industrialized and developing countries. For Rochel, the industrialized nations and businesses are awarded too much power at the expense of the public.

He therefore wants his work to make TRIPS a fairer agreement. How is he going to achieve this? He plans to analyze the agreement under the point of view of fairness and suggest ways to interpret the current text so that the “fruits of innovation” can be spread out more evenly. “In my view there’s great potential for a more progressive interpretation of the existing agreement, which would result in more fairness.”

As with all his academic work, Johan Rochel doesn’t want to restrict his ideas to the ivory tower. This is why he’s contacted key players in the field, including the WTO (World Trade Organization), WIPO (World Intellectual Property Organization) and WHO (World Health Organization) in Geneva. “They’re working to solve these very issues,” stresses Rochel, which is why he wanted to be a part of their dialogue.

He doesn’t expect to be able to shake things up all by himself. “These discussions are all about ideas. It’s important that I make my point of view heard,” says the idealist. And what about the issue of power? “Power is based on ideas,” explains Rochel, “and only those ideas that are actually on the table can be considered in the first place.”