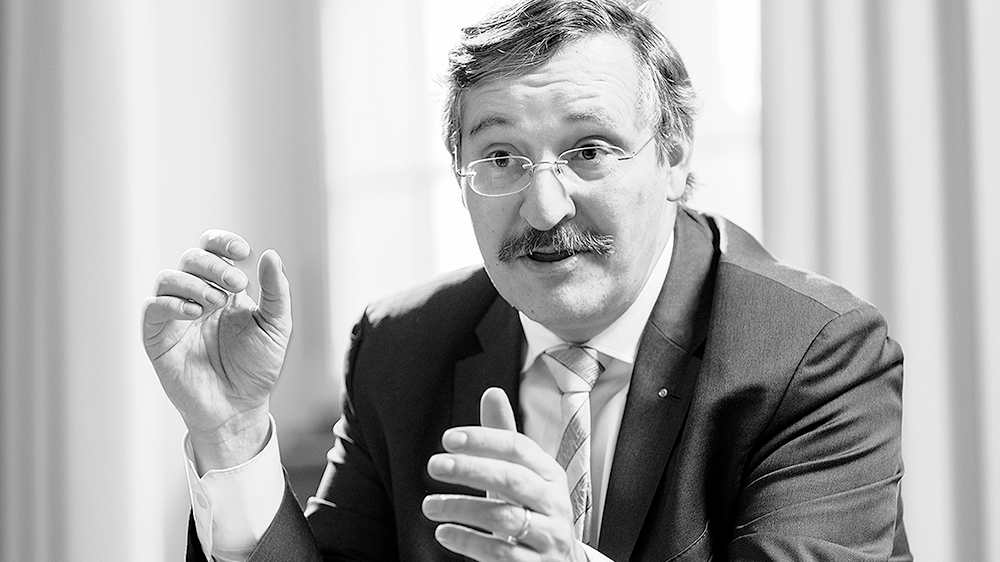 Michael Hengartner, you’re a member of a swissuniversities delegation conducting negotiations with the major scientific publishers (Springer Nature, Wiley, and Elsevier) to facilitate open access. What exactly does this involve?

Michael Hengartner: The goal is to allow everybody open or free access to scientific publications via the internet. The Swiss universities have committed to this vision under their open access strategy. The aim is open access to as many publicly funded publications as possible – ideally all of them – by 2024. We’re negotiating changes to the contracts with the scientific publishing houses. Instead of subscription fees for journals, in the future we want to pay for the production and quality assurance of articles so that anyone who’s interested can read and download publications free of charge.

So all this is prompted by the radical changes the internet is bringing about in publishing and libraries?

Yes. Until now university libraries have paid the scientific publishers subscription fees for the journals they make available to their users. Thanks to the internet, publications are now read and distributed online. Digital copies of academic publications, for example in PDF form, are also easy to distribute. As a result, print versions are becoming less and less important in many areas of science and academia. This shift has repercussions for the publishers’ business model. Instead of paying subscription fees, we’d be prepared to cover the costs of producing and assuring the quality of online publications and making them available on the relevant platforms. In return, the traditional subscription fees would have to be reduced or abolished completely in cases where paper copies are no longer ordered.

In 2015, Swiss universities paid 70 million francs for access to academic publications. Would the open access strategy reduce this expense?

What’s certain is that it will get more and more expensive if we stick to the old model, as the publishers raise their prices every year. But the current transitional phase is even more expensive than the old system. This is because in some cases classic subscription fees and the cost of publishing online exist side by side. This drives up the cost, because on top of the subscriptions, authors are forced to pay for their articles to be made available on an open access basis. Whether or not things are cheaper in a purely open access world depends on many factors, including our negotiating skills.

What challenges are you facing in these negotiations?

The major scientific publishers are in a strong position thanks to the prestige of their journals. Just think of publications such as Science or The Lancet – which, it’s worth remembering, were only possible in the first place thanks to peer review by scientists. In recent years the publishers have used this position to demand higher and higher subscription fees. Fees have risen so much that they’re no longer within libraries’ budgets. That’s not in the interests of taxpayers or universities. Changes are urgently needed, even if they’re hard to bring about.

Even though we unite all the relevant libraries in the country, our position shouldn’t be overestimated. Swiss universities account for around three percent of these publishers’ global sales. What’s important is that the conference of German university presidents has already started negotiations, and other countries are following suit. So we’re not alone, and we hope that other organizations will get on board as well.

Various models are being discussed under the banner of open access (see box). Which of these is swissuniversities aiming for in the negotiations?

In our negotiations we’re going for the so-called gold open access model, where original publications are freely accessible. Anyone interested in the publication can download it without barriers to access from a platform run by the publisher or a university. In return for this we compensate the publishers for the costs of production and quality assurance. However, the national open access strategy also includes the aim of further promoting green open access and alternative forms of open access publication.

Open access has also given rise to dubious predatory journals which demand hefty publication costs from authors but don’t do any quality assurance. What can be done about this?

Well, the publishers I mentioned that we’re negotiating with certainly don’t belong to this category. They publish prestigious journals such as Nature and Cell. But the problem of predatory journals does exist. The response of open access is the platinum model, where a non-profit third party does the publishing and quality is assured. A pioneering example is the cross-disciplinary mega-journal eLife, which was established in 2011 by the Max Planck Society, the Wellcome Trust, and the Howard Hughes Medical Institutes. Recently, however, eLife has also started charging authors a publication fee, so it’s not quite free for researchers. But establishing open access publishers of this sort – in other words new quality brands – isn’t possible in the short term, and requires a lot of patience.

In humanities circles there are fears that open access could jeopardize the traditional monograph.

I think books have their own advantages, and won’t disappear from the market. (Michael Hengartner produces a beautifully illustrated volume by naturalist Lorenz Oken, the first president of the University of Zurich). There are various models for safeguarding publications in the form of books, even though the content has to be freely accessible. In principle this means that someone will have to cover the costs of publication in addition. Discussions are under way. The Swiss National Science Foundation currently has a generous approach to digital open access books.

Under the swissuniversities national strategy, open access is to become a reality by 2024; the SNSF has even stipulated 2020 as the deadline for the projects it’s supporting.

As the president of swissuniversities, I can say that the different institutions within our organization are adopting a variety of approaches. We believe it’s realistic for basically all publications to be available online by 2024. The SNSF guidelines are helping us reach this goal.

Where does the University of Zurich stand?

As far as UZH is concerned, around 40 percent of our publications are freely accessible as full-text versions in our ZORA repository. Thanks to the engagement of my predecessor Hans Weder, one of the first university presidents to advocate open access, UZH has taken a pioneering role in Switzerland.

Green open access refers to the practice of republishing a publication in an open access institutional or disciplinary repository. In this case the publication is first published in a traditional, closed-access journal. At UZH, the Zurich Open Repository and Archive (ZORA) is available for republishing.