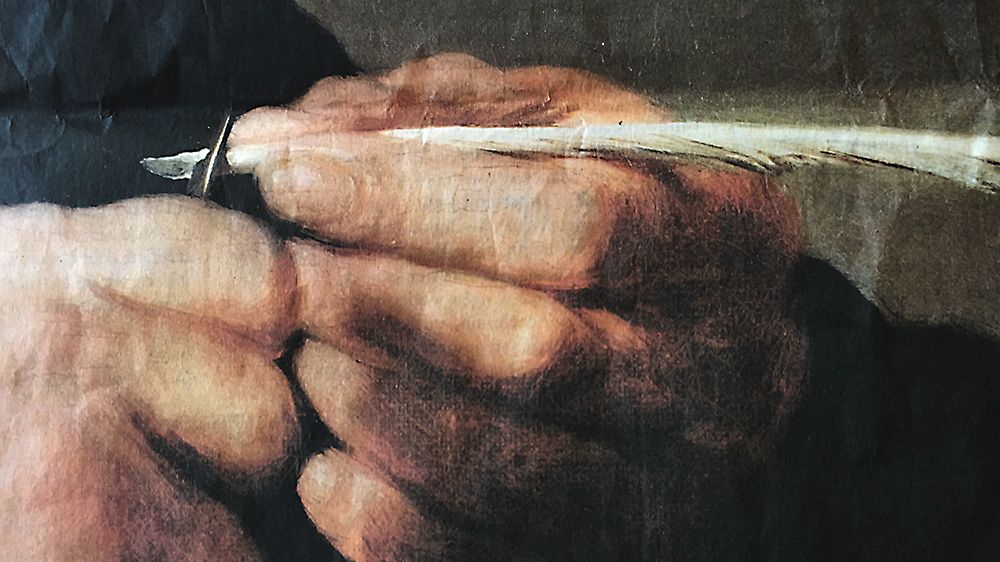 Sometimes you need to sharpen your quill in order to find the right words. (Picture: Detail from Rembrandt’s Portrait of a Man Trimming his Quill.)

Language doesn’t just reflect reality, it also shapes it. As part of its Gender Policy Code of Conduct, UZH has therefore undertaken to use language that does not disadvantage or exclude anyone. The newly revised guidelines for inclusive language (in German) provide suggestions and proposals for everyday spoken and written language that is non-discriminatory, and tackle the classic defensive reactions against inclusive writing such as “but we’ve always done it like that” or “that’s too complicated.”

While the new guidelines relate to the German language, many of the points are also applicable in English. For example, two specific language conventions are highlighted as discriminatory in the guidelines, namely: The generic masculine – the use of the masculine form to mean both genders – and using legal disclaimers at the start of texts stating that masculine forms automatically include the feminine. Section 2.3 of the UZH English Writing Guide gives specific guidance on the use of inclusive language in English.

A new addition to the guidelines is a chapter regarding the choice of illustrations and photos and the message they send, as this can also be an area beset with pitfalls. For example, pictures often show men taking up space and occupying a room, whereas pictures of women show the opposite. The guidelines advise editors to choose pictures that show women and men in equal positions and also not to marginalize anyone in the picture captions.

Choose your words with care

The guidelines also provide new suggestions for the inclusion of those people who do not have a defined gender. In English, masculine pronouns should not be used when the gender of the person in question is not known, instead the plural form should be used or the pronoun should be avoided altogether. UZH endorses the use of “they”, “their”, “them” in the singular to avoid the awkward “he/she”, “his/hers”, “him/her”.

The guidance differs depending on the type of text being written. Where possible and where it does not make the writing too unwieldy, a neutral plural form should be used, e.g. instead of firemen and firewomen, use firefighters. Instead of words with masculine markers, find a genderless term: For example instead of chairman or chairwoman use chair or chairperson, in place of mankind write humanity or people, etc.

Writers may feel that using gender-neutral language can sometimes make a text feel cumbersome, and it’s true that some skill is needed to choose appropriate and sensitive formulations. It may take some effort to find the right words, but it can also be fun – and the effort is worth it, because a good text is inclusive not exclusive.