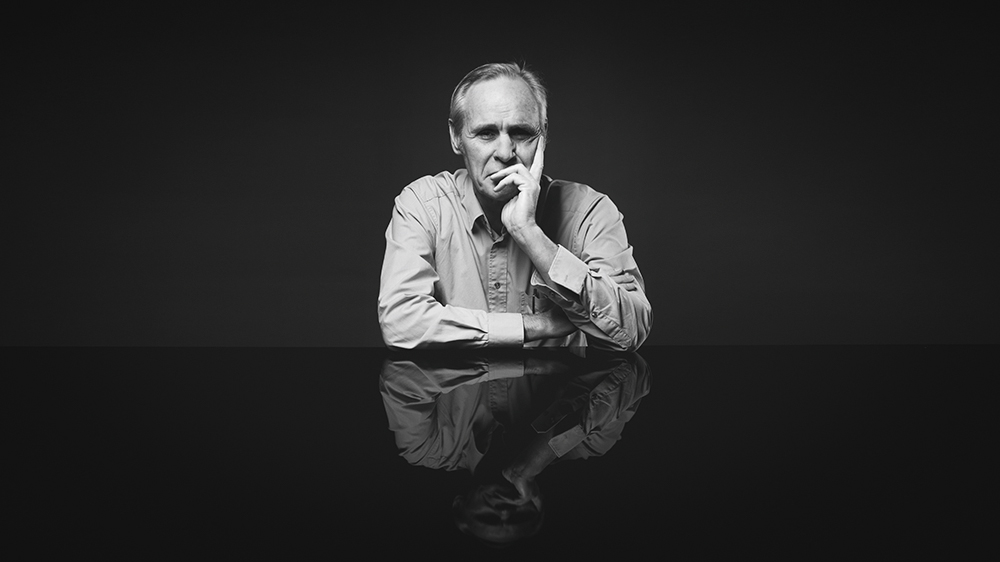 One of the larger apes is motioning agitatedly. Carel van Schaik, Director of the Department of Anthropology at UZH, points to a baby ape that is attempting to climb up the bars at the back of the cage. “The big one’s shouting: ‘That’s much too dangerous.  Somebody has to stop him’,” translates van Schaik. And indeed, only seconds later an older animal goes to grab the young one and lifts it onto its back.

Dutchman van Schaik has been researching apes for four decades, spending many years up close with them in the Indonesian jungle. Before joining UZH as professor in 2004, he was professor at Duke University in Durham (USA) for 15 years. Next year, van Schaik will enter professorial retirement; however, this won’t be the end of his research activity.

Research in the jungle

“We share almost 98 percent of genes with the orangutan, but nobody would ever mistake a human for an orangutan,” says Carel van Schaik. Why then has the path of humans over time diverted from that of their closest relatives? This is one of the major unsolved secrets in evolutionary research. Van Schaik and his team believe that cooperative breeding, that is the communal rearing of offspring, could be the decisive feature that distinguishes humans from apes. This idea – along with the size of our brains – is responsible for fostering the intelligence that enabled us to develop our capacity for language, among other things. By contrast, compared to humans great apes are fairly “selfish” when it comes to raising their young. Van Schaik and his team are currently investigating the common marmoset, a species in the family of Callitrichidae that raise their offspring with the help of the whole group, at the Irchel Campus. By researching the consequences of cooperative breeding, the researchers hope to find an answer to why humans became so different from apes so quickly.

Van Schaik has been researching and teaching at UZH for 13 years. “It’s like I’m tied to the chair in my office with a golden chain,” he says with a smile. And yet, he spent most of his researching years in the jungles of Indonesia rather than in offices or lecture halls. Overall, he lived in simple research stations in the jungles of Sumatra and Borneo for about nine years. “Those were wonderful, intense times, the best time of my life.”

Clever thanks to culture

He spent his time there “tailing” orangutans. He followed the great apes’ every step, recording every detail of what happened – a data point every two minutes, a GPS signal every half an hour.

“One time,” recalls van Schaik, “I climbed up a rope ladder into a treetop to check on a piece of equipment, and only then did I see that an orangutan was sitting right there.” Van Schaik feared that the ape might destroy the fragile device or the rope ladder. But to his amazement, the ape couldn’t have cared less about the objects. “This showed us that orangutans living in the wild generally avoid anything that is new.”

But what does simian research teach us about humankind? Possibly the most important insight is that all learning is socially regulated. For example, what an orangutan eats is culturally determined. They learn about their diet from their mothers, older relatives, and friends. Culture therefore makes them clever, just like it does humans. Our intelligence and what we use it for is thus passed on socially rather than innate. This knowledge can be useful when it comes to questions of education, for example: The more you let a small child observe what you do, the more inquisitive and innovative it will be when it grows up.

A diary of humankind

Van Schaik is set to retire and clear out his office next year – but he won’t quit his research. He’s still sitting on a treasure trove in his cabinets – hundreds of folders containing data yet to be analyzed. “We have 15 years’ worth of long-term data from Borneo,” says the anthropologist. He hopes he’ll finally have some time to analyze the data next year. Van Schaik would like to highlight aspects of his research that are relevant for society, which is why he plans to write books about human evolution and its consequences. “Society allowed me to devote my time to research for four decades. Now it’s time for me to give something back,” he says.

And he’s already taken the first step. Last year, he wrote the much-heeded book “Das Tagebuch der Menschheit” (the diary of humankind) together with science journalist Kai Michel. The book is an attempt to read the Bible as a historical document of humankind rather than see it as the word of God. According to the anthropologist, the Bible represents a revolutionary intellectual achievement, since it was a moral response to the social injustices of the time.

But he doesn’t want this “diary” to be the last book he writes. A topic that he’s deeply interested in is inequality. “Today, in times of populism, inequality has become a social problem again,” says van Schaik. “People feel disadvantaged, deserted, and think nothing is being done for them. We have to ask ourselves, how do we handle this situation?” Conversations with Carel van Schaik have a tendency to lead to these most fundamental issues of our common existence. He may not have an answer to all the questions, but he’s certainly not afraid of tackling them head on.

Tatang Mitra Setia commented on 13 January 2018, 15:56 A Smart and Energetic Professor I chose to participate in a research program in the tropical rain forest of Sumatra because Prof. Carel van Schaik is smart and hardworking. Since I first met and became his student in tropical rainforest in Sumatra, I learned a lot about science and gained valuable experience on how to do research and how to write a scientific article for publication. Proud to be his student. Thank you very much Prof. Dr. Carel van Schaik.
Annina Schwarz commented on 11 January 2018, 22:58 Best Professor During my bachelor I chose courses just because they were taught by professor Van Schaik! He is just amazing! Thank you!