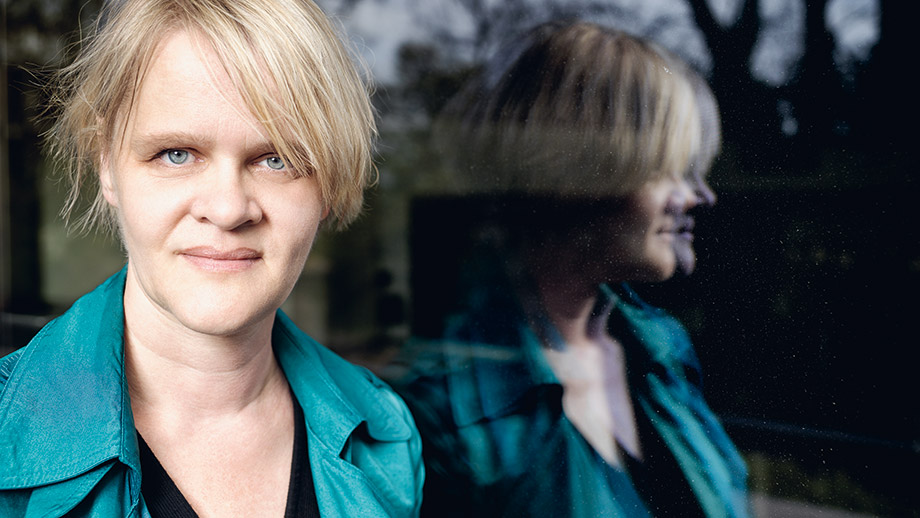 Slavonic Studies scholar Sylvia Sasse: “Every epoch has its own techniques and procedures for falsifying history.” (Image: Philipp Rohner)

Sylvia Sasse pushes a stack of paper aside. Her office is packed with books and cardboard boxes, exhibition posters are lying on the floor. The professor of Slavonic literature has just returned from Poland, where her exhibition “The Storming of the Winter Palace: Forensics of an Image”, curated together with Inka Arns, opened at the weekend. The exhibition was previously also shown in Gessnerallee in Zurich and in the Hartware MedienKunstVerein (HMVK) in Dortmund.

Sasse takes a seat, relaxes at the small table, and talks about the exhibition with relish. It is centered on a photograph that has become the symbol of the October Revolution in 1917 and that allegedly depicts the actual storming of the Winter Palace. In reality, however, the picture was taken three years later during a theatrical reenactment, a massive spectacle staged to mark the third anniversary of the revolution, and then retouched.

While it has since been revealed as fake, the photograph is still often referred to as a historical document in publications. A textbook example of the persistence of fake news? Sasse nods in agreement. Fake news isn’t a new phenomenon, it was simply referred to differently in the past as “airbrushing” or “rumors”. But it has always been about disinformation. “Every epoch has its own techniques and procedures for falsifying history,” says the scholar.

Sylvia Sasse grew up in the German Democratic Republic (GDR) as the child of working-class parents. She had originally wanted to study American studies, but when she came to the West shortly before the fall of the Berlin Wall – thanks to a birthday invitation from her aunt in Selbitz – she feared that the English she had learned in East Germany would not be at a high enough level. When she then attended a lecture by renowned Slavonic studies scholar Renate Lachmann at the University of Konstanz, she was spellbound. Sasse went on to study Slavonic studies under Lachmann and soon after went abroad to study in Saint Petersburg for a year.

As a child, Sasse had wanted to become a surgeon, but the state prevented her from gaining a general Abitur diploma. She was instead offered commercial training with Abitur, but which didn’t include biology. Studying medicine was therefore no longer possible for her. Later, when she sought to take up cultural studies at the Humboldt University of Berlin, she was rejected on the grounds of there being “no societal need” for her to do so. Sasse smiles. In 2005, she was appointed professor at the chair of eastern Slavonic literature and culture at the very university that had dismissed her application almost 20 years earlier – giving her a great sense of satisfaction – and later joined the University of Zurich.

Sasse says that life in the GDR, which she describes as a permanent masquerade, sharpened her awareness of, and ability to see through, the disingenuous or staged. This is why one of her main research priorities is performance art in Eastern Europe between 1950 and 1990, for which she has been awarded a lucrative ERC Consolidator Grant by the EU. The researcher wanted to know how artists stood up against dictatorships, how art that officially wasn’t allowed to exist came to be. The totalitarian regimes forced performance artists underground, where they had to find their own strategies. Repeating and imitating official rituals with minor changes was a key element, says Sasse. She calls this subversive affirmation and she’s currently writing a book on the subject. In the 1980s, for example, the Polish artist group Orange Alternative imitated the storming of the Winter Palace, which was lavishly commemorated in Eastern European countries each year, and gave it a Dadaist twist – by storming the Barbara Bar in Wrocław. They even included the intervening police in their stunt and gave them the part of the Whites, who were fighting for the counter-revolution.

As it happens, the secret police were quite often and against their will cast in supporting roles for these performances. Sasse’s current research project focuses on the secret services. The professor starts to speak with hushed tones but great excitement:

She wants to read the secret services’ archives as archives of art. To what extent did the secret services intervene in the performances? What kind of interactions were there with the artists, with the works of art? Take for example the case of East German artist Gabriele Stötzer. When she was looking for transvestites to take part in a photo series project, the Stasi, the GDR’s secret police, was quick to send her an undercover informant disguised as a transvestite – in order to negatively manipulate her career.

Is there a Stasi file about Sylvia Sasse? She nods. But it isn’t that exciting and only contains a few letters to her friends in the West. Sasse leans back in her chair. It’s also interesting for her personally to see the GDR through a different lens, via her research work.

Sasse doesn’t shy away from public interaction. She wants to share her and her student’s teaching and research findings and get their work out of the ivory tower. This is why she regularly seeks to work hand in hand with cultural institutions, such as the Literaturhaus, Gessnerallee and Cabaret Voltaire. An important topic is also the role of literature and art in contemporary society. “An exhibition allows me to do more than just explain a research topic,” says Sasse. “It can be presented and staged, and made to appear in a different light.” The Center for Arts and Cultural Studies (ZKK), which brings together researchers from the arts, literature and film studies, and where Sasse is a member of the executive committee, also looks to exchange views and engage with the artists themselves, whose work is then examined from a culture studies perspective in workshops.

Off to Saint Petersburg

Then there’s the online magazine Geschichte der Gegenwart (history of the present), where she and colleagues of hers critically reflect on the topics of our time. Sasse laughs. It may sound like she has a lot on her plate, but the mother of two says it all depends on who you work with. She doesn’t mind sitting alone at her desk, but she much prefers to work together with colleagues with whom she gets along well.

What’s her next project? She plans to present the results from her research into the secret service’s archives at an exhibition in Dortmund next year: It’ll be called “Artists & Agents”, and Sasse and her colleague Kata Krasznahorkai are currently in the midst of preparations. Sasse takes another look at the poster of the Storming of the Winter Palace exhibition and gives a mischievous laugh. Her goal is to show the exhibition about the fake photograph in the place where it was taken: In the Hermitage Museum, in other words the Winter Palace in Saint Petersburg – to mark the mass spectacle’s 100th anniversary in 2020.

Questions for Sylvia Sasse: “Children are a complete distraction”

Where are you at your most creative? – Everywhere. What’s more important is that there’s no pressure, no pointless competition and plenty of time.

What do you do to clear your mind and think of new things? – That happens automatically. When my children come home from school in the afternoon, that’s a complete distraction for me.

Which (famous) person would you like to dine with and why? – With Sandro Zanetti, my husband. With two kids, we don’t often have the time to do such things.

Three books that you would take with you to a deserted island? – I’d take Vladimir Nabokov’s Lolita, Elfriede Jelinek’s Greed and Ivan Goncharov’s Oblomov. But if I’m completely honest, I’d love to just take three empty notebooks to finally have the time to write, since my work already involves constant reading no matter where I am.

The mountains or the beach? – As time goes on, I’m more and more a mountain person and less and less a beach person.