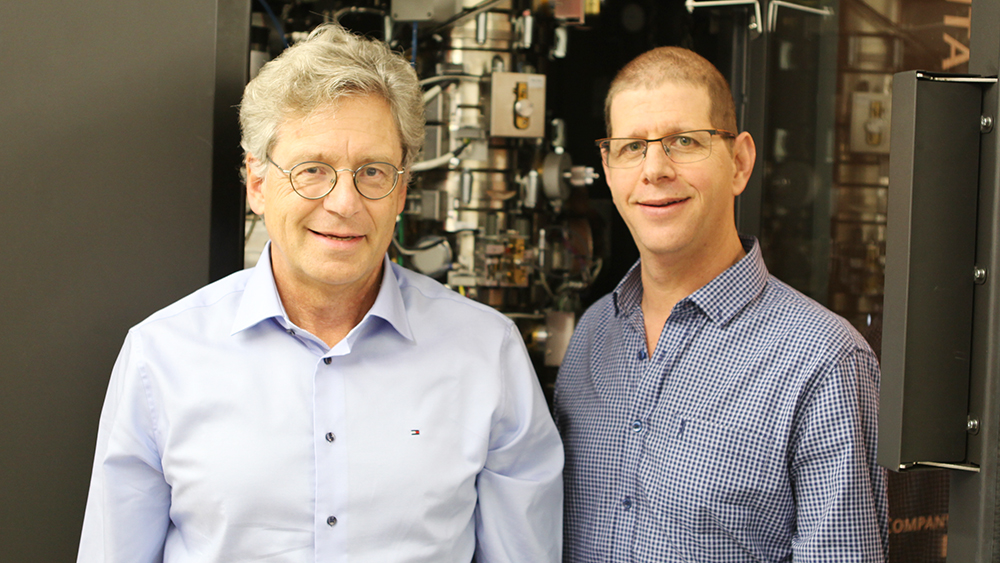 The European Research Council (ERC) has created a new funding instrument – the ERC Synergy Grant (see box). The scheme first ran under two pilot calls in 2012 and 2013, and was finally fully launched in 2018. It supports small teams of two to four scientists carrying out an interdisciplinary project to the highest scientific standards. The ERC today announced which projects it will be supporting with Synergy Grants in the next few years.

The UZH’s HighResCells project is among the winning research projects. The research project was set up by two UZH professors of biochemistry, Andreas Plückthun and Ohad Medalia, who are also two of the project’s four applicants.  Along with researchers from the University of Copenhagen and the Spanish National Center for Biotechnology, they have been awarded approx. 8.3 million euro for the period from 2018 to 2023. Around 4.7 million euro of this amount will go to the University of Zurich.

The researchers’ goal is to develop 3D high-resolution imaging to make the structure of biological molecules visible. “If we could lift the fog and observe cellular processes down to the smallest detail, this would usher in a whole new era for biology,” says Andreas Plückthun, project coordinator of HighResCells.

The researchers are particular interested in the cells’ surface receptors. These receive signals from the outside, which they then relay into the cell. This is also an important process when it comes to medicine, since the effectiveness of many drugs is based on these receptors.  Knowing what exactly happens at the boundary between a cell and its surroundings is therefore crucial when it comes to developing new drugs.

Previous methods to make this process visible each had its disadvantages. In X-ray crystallography, for example, researchers had to remove the receptors from the cells to analyze them. While this yielded groundbreaking results in the past 50 years, the most crucial information, i.e. how receptors interact, gets lost if the receptors are taken out of the cells.

Researchers have also used fluorescent substances to measure the distance between molecules. However, this doesn’t provide insights into the structure and changes of receptors when they’re activated or inhibited by other molecules in the body or through drugs.

“The great difficulty of making the cells’ receptors visible in high resolution has to do precisely with how they work: They’re very flexible and adapt to their neurotransmitters and environment. And this is where all previous methods of structural biology reached their limits,” says Plückthun.

This is where the four cooperating research groups of the HighResCells project come in. They want to develop a solution by combining the four methods they’re specialized in and that have seen major progress in the past decades: Protein engineering, electron tomography, mathematics and proteomics.

The research group of Andreas Plückthun is one of the worldwide leading groups in the field of protein engineering, and has developed molecules that bind to receptors and in this way make them visible. Professor Ohad Medalia has helped to develop electron tomography, a key technology which enables researchers to observe cells in great detail. The cells are plunge-frozen and their components can then be investigated in their natural environment.

José Maria Carazo, professor of biocomputing at the Spanish National Center for Biotechnology in Madrid, has developed novel mathematical models that go far beyond previously available programs, which make it possible to project blurry images of molecules into high-resolution 3D structures. And Jesper Olsen, professor at the University of Copenhagen’s Center for Protein Research, is contributing to the project through new developments in mass spectrometry, with a method that shows neighboring receptors on the cell surface, what they bind to, and their modifications.

“Combining the major progress achieved in these methods will allow us to solve a fundamental problem of biology and biomedicine: Creating high-resolution images of the structure of biological molecules in their natural surroundings,” believes Andreas Plückthun. And they’ve now also convinced and won the support of the ERC for their research.

ERC Synergy Grants support groups of two to four outstanding researchers and their teams in conducting interdisciplinary research projects that are only possible by working together. The individual expertise of the investigators has to complement each other, create synergies, and bring together different resources in order to achieve groundbreaking research results. In a pilot phase, the ERC put out a first call for proposals in 2012, and with the 2018 call the funding scheme has definitely kicked off.

Synergy Grants thus complement the ERC Starting Grants, ERC Consolidator Grants and ERC Advanced Grants. It is planned to have a call for proposals each year, usually with a November deadline. The ERC-2019-SyG call is currently still accepting proposals until the deadline on 8 November 2018. Researchers have to decide whether they want to apply for StG, CoG, AdG or the new SyG. It is not possible to apply for multiple grants at the same time, as researchers can only be awarded one grant at a time.