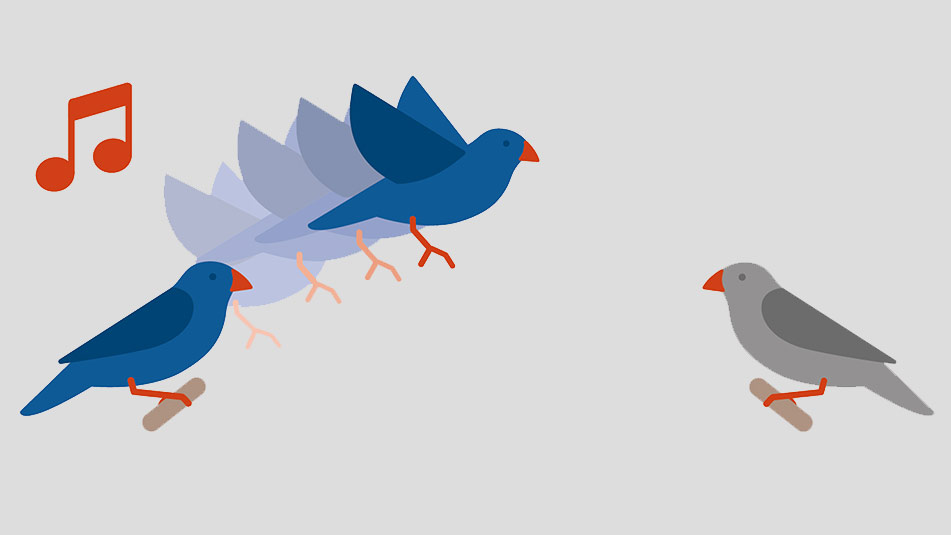 Children are constantly learning new things, but whether they find it easy or hard to generalize what they have learned and apply it to new situations can depend on how they learned it. It is much the same for songbirds. In their first few months of life, they too must learn a great deal; for example, the characteristic song of their species. And like people, birds also learn in different ways. How these methods impact the ability to generalize was the subject of a study on zebra finches, conducted by a research team led by Richard Hahnloser, professor at ETH Zurich and the University of Zurich.

In their experiments (see box), the researchers were able to show that zebra finches can learn by observing fellow members of their species. The birds had to learn through trial and error to discriminate between two classes of birdsong, one long and one short. Without any special preparation, the median number of repetitions it took for the birds to master the task was 4,700. But if the finches were able to observe other finches as they learned this task, then it took them just 900 repetitions. In this experimental set up and for statistical reasons, 800 repetitions are required in order to evaluate the animals’ performance. This means that the observing birds mastered the task almost from the very beginning.

In the next phase of the experiment, the researchers tested how well the zebra finches could solve a second, similar task, in which the birds had to distinguish between varying lengths of a different sample of birdsongs. This revealed that birds that learned the first task using trial and error from the outset could solve the second task practically right away: It took them a median of just 800 attempts. By contrast, birds that learned the first task primarily through observation needed a median value of 3,600 attempts.

“These results indicate that in zebra finches, learning by trial and error is the more robust method,” summarizes Hahnloser, continuing, “Birds that learned a perceptual skill through trial and error were better able to generalize and adapt that skill to new situations than those that learned it through observation.”

Both learning methods have their advantages

Gagan Narula, a postdoc in Hahnloser’s group and lead author of the study, points to parallels with how children and youths learn: “Active learning, which focuses on experimentation and trial and error, is becoming more and more prevalent in schools. In secondary schools, even maths is now being taught with the help of experiments.”

Still, “both methods have their advantages,” Hahnloser says, “but learning through observation is faster.” He notes that the Swiss education system deliberately incorporates both learning methods: lectures and observation on the one hand, and experiments, exercises and homework on the other.

Neural computer models assisted the scientists in interpreting their findings. From these model calculations, the researchers surmise that although the act of observation involves many synapses between neurons in a finch brain, these are relatively weak. In contrast, trial-and-error learning involves a smaller number of synapses, but they are much stronger, leading to an enhanced ability to generalise. Hahnloser explains: “When observing, the birds may focus on a large number of song details, many of which are irrelevant for solving the problem at hand. In the trial-and-error case, they remember fewer details but focus on the most prominent aspects of the song, such as its duration.”

Whether different learning methods affect the brains of children and teenagers in the same way is still to be investigated. "In the past, research on zebra finches has repeatedly provided important clues and hypotheses for investigating neurobiological processes, in particular in relation to vocal learning," says Hahnloser. "Our latest findings in finches also lead to hypotheses that could be studied in humans to better understand social learning processes."

Example of a short song from Class A

and a slightly longer one from Class B.

For the experiment, the scientists used two adjacent birdcages separated by a partition, with a zebra finch in each cage. One of the finches had to use trial and error to learn to discriminate between two classes of birdsong. The other bird observed the learning process.

Each of the birds could see the other only by sitting on a particular perch in the cage next to a window in the partition. Because zebra finches are social animals, they were naturally drawn to this particular perch.

If the “experimenter” finch flew to that perch, it would hear one of ten variations of a zebra finch song. The samples had minimal differences in length, which was the defining property for splitting the song samples into two classes: Class A contained the five shorter song samples (lasting 0.9 to 1.0 seconds), and Class B had the five longer ones (1.03 to 1.13 seconds). One second after a sample from Class B was played, the team administered an air-puff to the bird.

If the bird was able to differentiate between the two classes, then it could avoid the slightly unpleasant puff of air. In this way, the scientists were able to determine whether a bird had learned the task or not.