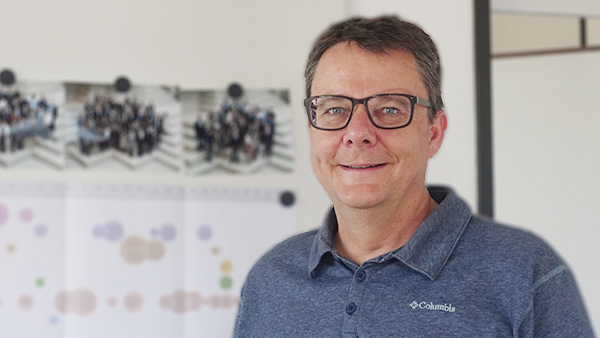 Will be Vice President on the first of August: Michael Schaepman, Professor for remote sensing and current dean of the Faculty of Science UZH. (Image: Marita Fuchs)

For now, Michael Schaepman can still be found at the Office of the Dean of the Faculty of Science, located at Irchel Campus. But as of 1 August 2017, he will be moving to new quarters: Yesterday, the Board of the University named him Vice President of Veterinary Medicine and Natural Sciences. Schaepman is a pioneer in this regard because the Office of the Vice President for Veterinary Medicine and Natural Sciences is an entirely new unit at UZH. The new Vice President will be responsible for affairs at the Vetsuisse Faculty and the Faculty of Science. He will also be in charge of coordinating the UZH technology platforms and will oversee the offices for research, academic career development, and innovation.

Schaepman, who is full professor of remote sensing at UZH, sees particular challenges in the University’s infrastructure. The lack of space and need to renovate the facilities at Irchel Campus and the Veterinary Teaching Hospital are fundamental issues, according to Schaepman, especially as good research and teaching is dependent on having enough space.

In addition, the new Vice President plans to promote interdisciplinary collaboration by offering effective support to researchers who apply for funding. And he will work actively on behalf of young entrepreneurs who want to create something new after completing their studies. Last but not least, Schaepman – who has two children – places great value on family-friendly structures at UZH. In this regard, he plans to hire more women professors and to promote the compatibility of family and career for both men and women.

The name Schaepman means “shepherd” in Dutch, and the new Vice President has roots in the Netherlands. “I am a typical ‘Secondo,’” he claims. His father is Dutch, his mother German, and he grew up in Switzerland. From 2003 to 2009, Schaepman was professor at the University of Wageningen in the Netherlands, one of the world’s most important academic institutions in the field of life sciences. Dutch higher education is organized very differently than in Switzerland, says Schaepman. There, everything is calculated to the last decimal. For instance, universities analyze how many students study at each professorial chair and distribute funding accordingly.

Overall, he prefers the Swiss system, although he sees room for improvement. For instance, Schaepman believes the traditional professorial chair as an academic unit is antiquated. “In the long run, a cultural shift will take place, leading to even more modern structures at UZH.”

Interdisciplinary scholarship is in demand

As Dean of the Faculty of Science, Schaepman is already very familiar with one of the faculties in his charge. But what about the Vetsuisse Faculty? Schaepman looks forward to this aspect of his new job and sees many common areas, particularly in administration but also in research. The dual professorships at the two faculties are evidence of this. “Collaboration is one of my main priorities, and I want to promote interdisciplinary research,” Schaepman emphasizes. Graduates with an interdisciplinary background have excellent career prospects, he claims. And continues, “The future is interdisciplinary.”

Schaepman would know. He himself has a long entrepreneurial record as co-founder – and from 1996 to 2015 as board member – of “Netcetera,” a software development company in Zurich. Now he wants to motivate UZH graduates to create something new and to invest their know-how in, for example, a start-up company. “That way, the region can retain the knowledge and skills that UZH helped generate,” Schaepman says. “And it would be fantastic if the planned innovation park in Dübendorf could create something like Silicon valley – namely, considerable added value stemming from the local universities.”

Research must be funded. It is a simple fact, yet it is one of the new Vice President’s most pressing challenges. “We receive excellent support from the Swiss National Science Foundation,” he says. Nevertheless, he sees room for improvement in UZH’s ability to acquire European funding. Schaepman envisions a central office to support UZH researchers in submitting professional applications for funding. This would allow the non-academic aspects of the proposals to be written by a central office at the University that is well-versed in the correct wording. Support in submitting proposals should be open to researchers at all UZH faculties.

Returning to the Vetsuisse Faculty: Animal testing is a delicate issue at UZH. Schaepman stresses that no new medications can be developed without testing on animals, but he also believes it is critical that the goals of research are communicated clearly and that open dialogue with the general public takes place. “This doesn’t only concern animal testing. All ethically sensitive aspects of research are involved,” he says.

The Vice President will be taking on many new responsibilities in addition to handing over his duties as Dean of the Faculty of Science to an as yet unnamed colleague. Despite the amount of time his work demands, Schaepman shares parenting duties with his wife, who also works in academia and often travels to Siberia. Schaepman has accompanied his wife on her travels to Russia – and very much enjoyed the trips. He has experienced Siberia as an ideal place to relax. “There is no cell-phone or internet reception. And our children like to come along, too.”

And when the entire family is at home, who is in charge of cooking dinner? He likes cooking Persian food, Schaepman says. During his doctoral studies, he worked with a colleague from Iran. The friendship between the two researchers has held over the years and, in the meantime, his friend has become Dean at the University of Teheran. Schaepman was inspired by his Iranian friend’s passion for Persian food, and is especially good at preparing a classic Persain dessert called Faloodeh (in Persian: فالوده, Fālūde) that is made of rice noodles, rose-water sorbet, and lime juice. Future Vice President Schaepman has decided to share the recipe. (See box.)

Combine sugar and water in a small saucepan. Simmer over medium heat until sugar is dissolved. Remove from heat and stir in rose water. Let syrup cool completely.

Place noodles in a heatproof bowl. Add enough boiling water to cover and let stand for five minutes or until soft. Drain and rinse under cold water. Cut or tear noodles into two-inch pieces.

Combine noodles and syrup in a shallow glass or metal baking dish. Place in freezer.

After one hour, remove from freezer and stir with a fork. Return to freezer for another hour, rake with a fork, and then put back in freezer until desired consistency is reached, about one to three more hours.

To serve, rake with a fork and scoop into bowls. Serve with fresh lime juice or lime wedges. Also delicious with sour cherries or sour cherry syrup, fresh berries, pistachios, or mint.