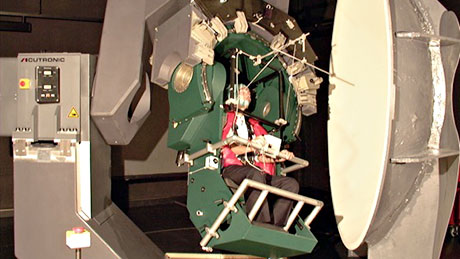 Researching dizziness: The rotating chair at the Department of Neurology was financed in large part by the Koetser Foundation. (Photo used with permission)

After pain, the most common complaint that patients consult their doctors about is dizziness. There is a particular feature of our nervous system that can help doctors identify the causes of dizziness and balance disorders: The vestibular system in the inner ear and the balance center in the brain are connected to the eye muscles. This means that if a doctor measures a patient’s eye movements while they are moving their body or head, they can gain information about the causes of the problem, which in many cases can be successfully treated.

Professor Dominik Straumann and his team at the Department of Neurology at UniversityHospital Zurich are dedicated to researching balance disorders. An important tool for their experiments is a three-dimensional motorized rotating chair (see photo). It allows the patients to be moved in all directions while their eye movements are measured.

The chair’s construction was largely financed by the Betty and David Koetser Foundation for Brain Research. The foundation has been supporting basic research and clinical research in neuroscience, in particular at UZH, for 25 years. In total, the foundation has donated 2.9 million francs to research projects at the University of Zurich. One focus of the projects supported is balance disorders and neuropsychological problems.

The foundation was established by the Koetsers, a family of art dealers who opened their first gallery in Amsterdam at the beginning of the 20th century. In 1967, David Koetser was living in Zurich and opened an art gallery in the city. In the last few years of his life he suffered from Parkinson’s disease and was a patient of Professor Volker Henn, then head of the neurology outpatients department at UniversityHospital Zurich. In 1993, following the death of her husband David, Betty Koetser, with the support of her family and assisted by Professor Henn, founded the Betty and David Koetser Foundation for Brain Research.

In addition to providing financial support for research projects, the foundation hands out the annual Koetser Award for outstanding brain research at universities around the world (see box). Former awardees include Norwegian married couple May-Britt Moser and Edvard Moser. They were granted the Koetser Award in 2006 and went on to win the Nobel Prize for Medicine/Physiology in 2014. Their research looked at how the hippocampus makes spatial orientation possible.

Professor Martin Schwab of the University of Zurich was granted the Koetser Award in 2007 for his research into the function of the Nogo protein in inhibiting nerve growth. Other award holders include former UZH researchers such as molecular biologist Charles Weissmann and neurologist Theodor Landis.

As part of the 25th anniversary celebrations, a symposium at the Neuroscience Center Zurich brought together former Koetser awardees to report on new scientific findings relating to the treatment of balance disorders.

At the same time, the 2017 Koetser Award was presented to Professor Gabor Michael Halmagyi of the University of Sydney. He was honored for the development of the Halmagyi-Curthoys head impulse test – the procedure mentioned at the start of the article that uses eye movements to diagnose the causes of balance disorders. The simple and effective test is now used all over the world.

A population-based study on incidence, survival and molecular genetics of gliomas in the Canton of Zurich, Switzerland: a retrospective study from 2010-2014, MD D. Gramatzki, USZ, Department of Neurology