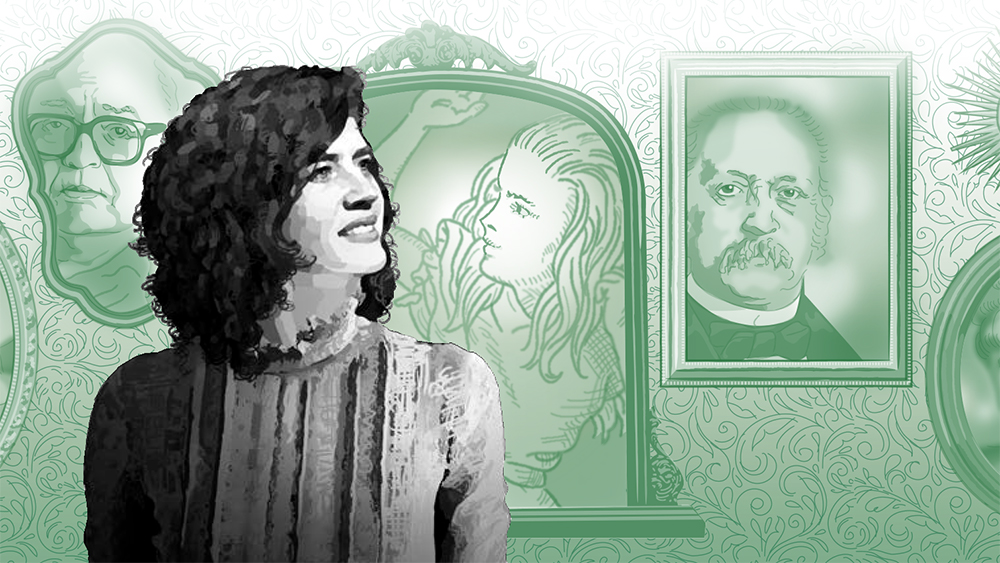 It’s nine in the morning, and we’ve arranged to meet for coffee and pastries in Café Schurter by Central. Christine Lötscher, with her bouncy curls, upbeat mood, and sharp mind, quickly begins to chat openly as we sit down with our dangerously frothy cappuccinos. It’s clear that the literary critic enjoys and has a gift for intellectually stimulating conversation. In fact it’s part of her job – she often appears on stage at literature centers, cultural festivals, or book fairs, hosting readings and chairing debates. She was also a member of the team of critics on the “Literaturclub” TV show, and was on the jury of the Swiss book prize.

Although it has now become second nature to her, Christine Lötscher describes her first public appearance as a “huge disaster.” The event at the Literaturhaus Zurich was supposed to be a panel discussion about Friedrich Dürrenmatt. The four young authors on the panel were to explore the question of whether as the “grand old man” of Swiss literature he was a “spiritus rector” or an overbearing patriarch from whose shadows they wanted to escape. But either they had not prepared or they simply didn’t know anything about Dürrenmatt’s work: “In any case there was no relevant exchange of views, and at some point I didn’t know what else I could ask.” The awkward situation was rescued in the end by Hugo Loetscher, himself a grand old man and an intellectual powerhouse. “Loetscher suddenly stood up in the middle of the audience that was full of prominent figures and began talking” – a fortunate and worthy end to a disappointing evening. “I made up my mind then and there that I would never do an event like that again.”

But luckily she didn’t hold to her word, and hosting literary events has in the meantime become one of her favorite activities. And nowadays “the conversation taking an unexpected turn” is one of the things she enjoys the most about such discussions. At the end of October, she interviewed bestselling author Sten Nadolny (The Discovery of Slowness) as part of the Zürich liest book festival, and talked at the Bodman Literaturhaus in Gottlieben on Lake Constance with Peter von Matt about his new book.

The work of von Matt, an influential figure in the field of literary studies and emeritus professor at UZH, is well known to Lötscher – she wrote her licentiate thesis under his supervision in 1996: “Men’s deaths and women’s deaths in the works of Theodor Fontane.” The most important German representative of realism, recalls Lötscher in our conversation, portrays the deaths of (young) women and (old) men differently. While Effi Briest slowly wastes away as societal constraints rob her of her childlike lust for life, Fontane describes the death of Major Dubslav of the noble Stechlin family in Brandenburg as a departure from an old world.

When she’s not appearing in public talking to others about their work, Lötscher can be found sitting in a quiet room immersed in writing about her own passions – world literature, contemporary texts, media theory, and popular genres of literature and film. Her subjects may be modern, but she is firmly rooted in the world of academia: After completing her studies in German language and literature, general history, and ecclesiastical history at the University of Zurich, and successfully starting her career in media (first as an editor on various regional newspapers, then as culture correspondent at the Tages-Anzeiger), she quickly found her way back to her alma mater.

Popular media as an area of research

In 2005, she took a position as editor on the specialist magazine Buch&Maus published by the Swiss Institute for Children’s and Young Adult Books (SIKJM), an associated institute of UZH, a job she combined with looking after her young children. At the SIKJM, Lötscher got to know Ingrid Tomkowiak, UZH professor of popular literature and media. “Thematically, I felt we had a lot in common,” says Lötscher, “after all, as a teenager I spent my time reading thrillers and watching countless hours of TV series.” When the fantasy boom hit the book market and “Harry Potter landed on the scene like a meteorite,”

Christine Lötscher’s academic curiosity was awakened – the modern apprentice wizard led her back to UZH to begin her PhD. In a project led by Professor Tomkowiak and supported by the Swiss National Science Foundation on children’s and young adults’ fantasy literature and film adaptations, Lötscher analyzed a range of fantasy novels, including Michael Ende’s classic The Neverending Story and Cornelia Funke’s Inkheart trilogy, from a cultural studies/media theory perspective. “The fact that this genre has survived in children’s bedrooms alongside smartphones, computer games, internet, and TV series, shows that we all long in some way for a pre-media paradise,” believes Lötscher.

From Alice in Wonderland to Twin Peaks

In 2014, following her dissertation in the field of popular culture studies, Lötscher obtained a position on another SNF project. Now, she says, she needs to urgently complete her habilitation thesis, in which she investigates the poetics of nonsense and materiality in Lewis Carroll’s Alice books.

Since spring this year she has been working  as a research fellow at the Freie Universität Berlin on a new subject. As part of a center for advanced studies called Cinepoetics, she is researching how fear and horror is produced in film using processes known from literature. Lötscher is fascinated by how the aesthetic processes in series such as Twin Peaks and Stranger Things are based on those used in German and Victorian romanticism, for example. “I also get to indulge my two great passions from childhood – thrillers and TV series – guilt-free, and watch all the new seasons with the excuse that it’s part of my academic work,” laughs Christine, before saying goodbye and making her way to the Zentralbibliothek. She has ordered some books from the library and they are ready to be collected. Which ones? Poetik der Figur. Zwischen Geometrie und Rhetorik: Modelle der Textkomposition von Lessing bis Valéry and The Unique Legacy of Weird Tales. The Evolution of Modern Fantasy and Horror.