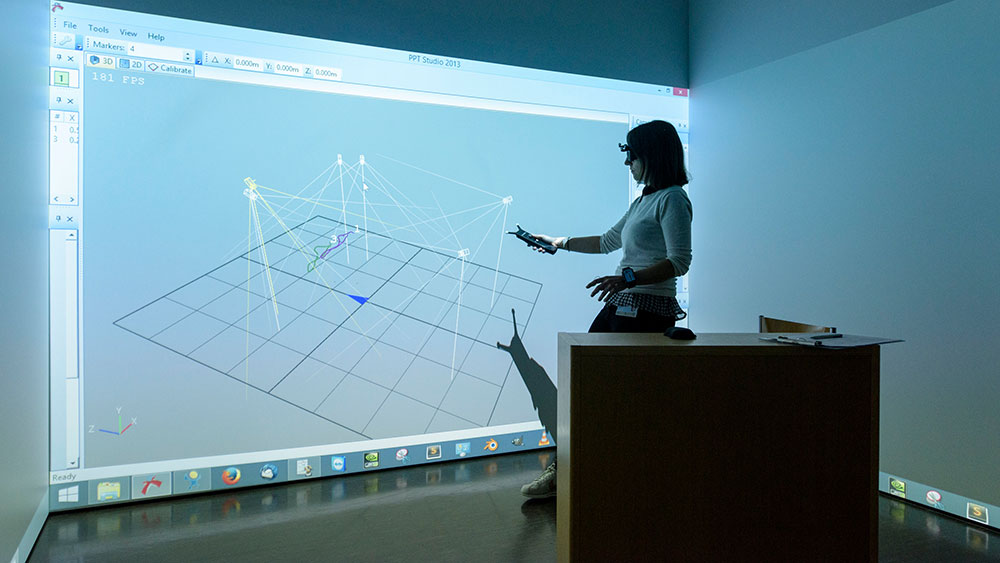 In the modern world, people spend a lot of time moving from one place to another – commuting to and from work, driving to visit friends, or traveling abroad on holiday. Whether we want to find the best route to drive, the most direct way to walk, or just check the train timetable, we always turn to our trusty digital friend and constant companion: The smartphone. This intelligent device has fundamentally changed human navigation behavior: Apps such as Google Maps show you the quickest possible way to get from A to B, with a stop-off en route at C if you wish (provided you have a GPS signal and enough battery life of course). “As we become more and more reliant on digital aids, we have to bear the consequences – our inner sense of direction is atrophying,” says UZH geographer Sara Fabrikant.

Research has shown this to be true. Anthropologist Claudio Aporta from Carleton University in Alberta, Canada, studied the navigation behavior of the indigenous people of Greenland in a long-term study. They were able to move confidently and without assistance through what to us would seem like completely monotonous snow-covered landscapes, by observing the ice and snow drifts. With the more widespread use of GPS devices, this natural sense of direction was no longer needed and became less and less developed. Nowadays people in Greenland navigate almost exclusively using digital aids.

“Digital navigation systems have become so normal nowadays that we don’t stop to think about when, how, and where we actually use them,” says Sara Fabrikant. The situations in which we use the digital aids are very diverse, and our decision to take a particular route also depends on the situation. For example, if we are stressed and in a hurry, we are more likely to take the more difficult but shorter route, and if a storm hits, then we’ll try to cut through a shopping arcade or take the bus instead. Suddenly we have to take decisions based on wind, weather, or emotional aspects that have a considerable influence on our personal navigation. “Such influences are not currently taken into account by existing navigation systems or by the research being done,” says Fabrikant.

But how can new technologies support us in these decisions? And how can we preserve our natural sense of direction amid the clamor of all these digital aids? These are the questions being answered by Sara Fabrikant with her research project EMOtive, which is financed by the Swiss National Science Foundation and is part of the UZH Digital Society Initiative. In a novel approach, Fabrikant is combining neuroscience, cognitive science, and geographic information science with cartography in order to research how people interact with digital maps – and how they can avoid forgetting their environment along the way. “After all, if one day the navigation tool doesn’t work, the users themselves have to be ready to take over,” says Fabrikant. 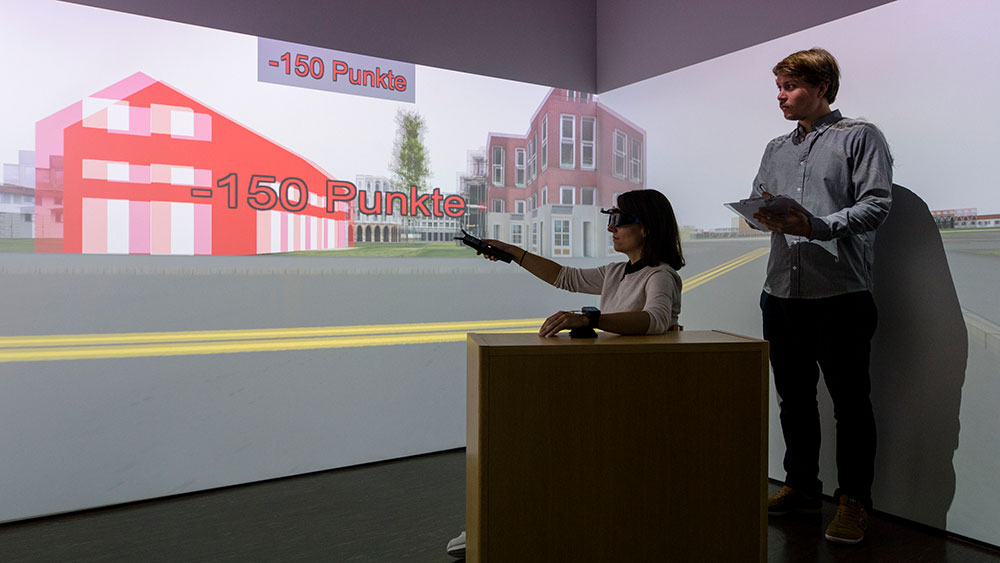 In a darkened room in the Department of Geography at Irchel Campus, cameras and projectors dangle from the ceiling. This is the research laboratory of Sascha Credé, a PhD candidate who is investigating how people in stressful situations navigate with the help of digital aids. Wearing 3D glasses and wired up to sensors, his testers make their way through a virtual city. The aim is to get to the location of a fictional job interview within a short time frame and at the same time to take note of prominent buildings in the area. The simulation is so realistic that people stick to the rules of the road, watch out for traffic, and only cross the street at pedestrian crossings.

With the touch of a button, a map comes up showing the participant’s current position, the surroundings, and the destination. During the test, a countdown clock ticks mercilessly, signaling with piercing beeps that time is slowly but surely running out. The intention of the beeps is to make the participants feel stressed, which is also measured: When we are under pressure, we sweat slightly making our skin more conductive. But even when the participant finally reaches the location of the fictional job interview, the test is not yet over. They then have to remember the buildings they saw in the virtual city and indicate their approximate direction. “With this part, I want to find out whether stressful situations prevent us from noticing our surroundings – and how we can combat this,” explains Credé. With his research, he is preparing the groundwork for the possibility that, in the future, digital maps will be able to dynamically adapt to the emotional state of the user, for example by particularly highlighting landmarks that could be helpful for navigation. This would mean the user’s attention would be drawn only where necessary and could be used efficiently for navigating and learning. 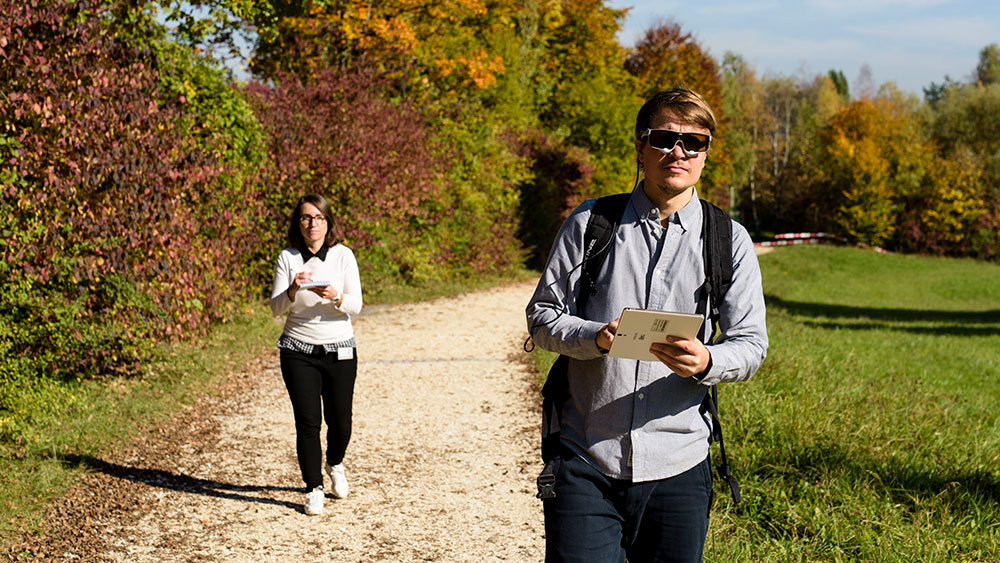 A walk around Oerlikon

It is not only our emotional state, but also our interaction with digital aids that influences how we experience our environment and orient ourselves. Annina Brügger wants to find an optimal balance between having the support of devices and using our own navigational skills. “We are very distracted when we look at a navigation device,” she explains. That can be dangerous if, for example, we don’t notice a car pulling out in front of us. But how much technical support is actually necessary for orientation, and how much could we rely on our own individual skills?

The 60 or so participants of Brügger’s study have to follow a particular route in Oerlikon and can use a digital aid for navigation. They also wear special glasses that record the direction in which they are looking. Everything is recorded in the test: What the participants look at in their surroundings, when and for how long they look at their navigation devices – for example at a crossroads – and which of the devices’ functions they use.

The researcher makes particular note of which functions distract the walkers the most. The experiment shows that even for simple routes, we rely heavily on navigation aids, and for example if the route is going straight ahead we check our position with the device more often than really necessary. Every so often, the device prompts the participants to observe their surroundings and to identify and name certain buildings. “We are trying to improve the interaction between humans and their environment despite the use of digital aids,” says Brügger.

The research being done by Sara Fabrikant and her group is contributing to the improvement of life in a digital society. “We want to harness the advantages of the new technologies while mitigating their negative consequences,” she says. New research methods and data collected by EMOtive in the lab and in the real world form the basis for the next research project, for which the team has received an ERC Advanced Grant of 2.5 million francs from the EU.

In the new project, Fabrikant intends to research how people use map data when they are out and about, and how digital aids should present such data so that we can still maintain our own sense of direction. “With EMOtive, we have scratched the surface of personalized digital navigation systems,” says Fabrikant. She believes that it is now necessary to gain a deeper understanding of this multi-faceted topic. Specifically, as part of the new project, she is also working on the design of an adaptive map display for the navigation aid of the future. The idea is that it will take into account not only where a person is and where they want to go, but also how the user thinks and feels, and how they are influenced by their environment. Through audiovisual feedback and targeted prompts, the tool should also help people to improve their knowledge of their surroundings.

In addition, the device will use already-existing technologies such as recognition of emotions through smartphone cameras and microphones. Fabrikant is also thinking of integrating mobile sensors that measure brainwaves, pulse, and body temperature, similar to those sometimes found in fitness trackers today. One of the future applications of such map technology could be in self-driving cars. If the navigation system breaks down or its route suggestions are not suitable, we will have to step in and maneuver the vehicle through the streets ourselves. We can only do that if we are aware of our surroundings, awareness which the new generation of maps will help us to develop.

Switzerland’s first-ever national Digital Day takes place on 21 November 2017. UZH is also taking part. In a series of UZH Talks, 16 experts from a wide range of subject areas answer questions on the digital society, including professor of geography Sara Fabrikant. You can find the full list of UZH events here.