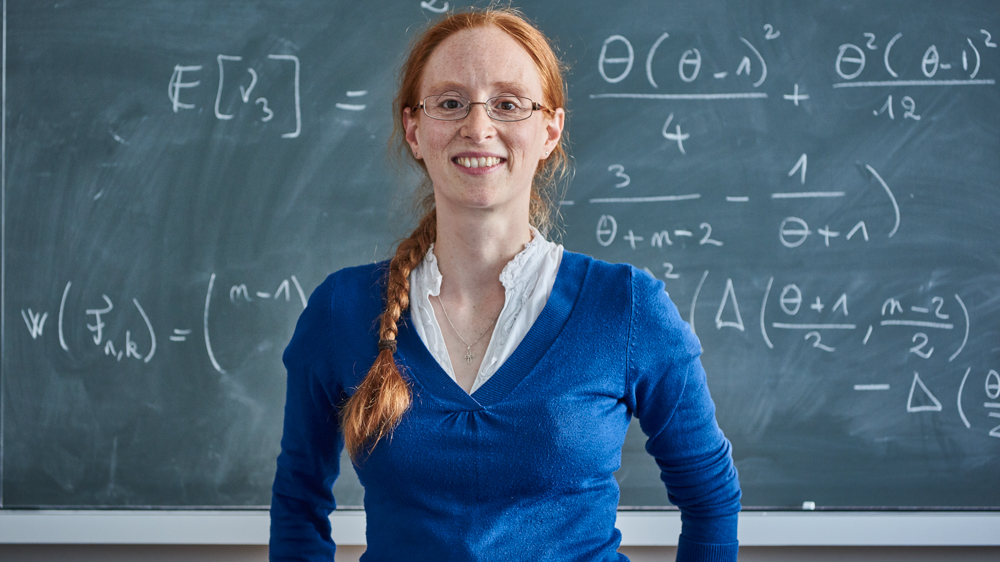 Mathilde Bouvel’s working space at the UZH Institute of Mathematics is spartan, almost monastic. A sparsely decorated room, white walls, large windows, desks bare apart from the computers. The mathematicians peer at their computer screens or stare up at the ceiling in concentration. Every now and then someone scribbles in a notebook. “All I need is a pencil and paper,” says the winner of this year’s Marie Heim-Vögtlin Prize, which she will receive this Thursday. Clear thoughts, pure logic, abstract concepts – in mathematics, everything happens in the head.

“My area of research is permutations,” says the lively Frenchwoman, wide eyes shining behind her glasses. We have moved to the cafeteria so that we don’t disturb her colleagues from their calculations. Permutations? “It’s about arranging objects in a particular order,” explains the researcher. A simple example takes three objects, different pieces of fruit, say: A banana, an apple, and a pear can be arranged in six different ways and moving them from one position to another is a permutation. Bouvel studies permutations of large groups of objects that avoid certain patterns. This is where it quickly gets complicated for the layperson.

“My area of specialization is abstract and very mathematical,” smiles 34-year-old Mathilde Bouvel. Which is precisely why she chose it. Her talent with numbers and abstract concepts was evident from a very young age. “Even before I could read words, I could read music,” she remembers. Bouvel, who grew up in Nancy, excelled at school thanks to her talent with numbers.

After completing her Baccalaureate, she applied to the ENS (École Normale Supérieure) in Cachan near Paris and passed the entrance exam in computer science. It was at ENS that Bouvel first became interested in combinatorics and permutations, and discovered her affinity for this area, which is currently of particular significance in the field of data science, for example for encryption or for recognizing patterns in large data sets. She then pursued her passion, completing a PhD with a thesis on combinatorical problems of certain permutations at Paris Diderot University.

Since then, she has worked in research, initially as a junior researcher with tenure at the Bordeaux Computer Science Research Laboratory. When her husband Valentin Féray was offered a position as assistant professor for pure mathematics at the University of Zurich, she decided to follow him and has worked as a researcher at UZH for the last four years, where she now also teaches.

After the birth of her first child, Bouvel received support from a Marie Heim-Vögtlin grant offered by the Swiss National Science Foundation. The aim of these grants is to support female researchers who start a family to continue their academic careers. Since then she has had a second child, and Mathilde Bouvel has now also been awarded the MHV prize of 25,000 francs. “I will invest the money in childcare,” says the academic, who has just returned to work after maternity leave. The SNF is replacing the MHV grants with a new funding instrument called PRIMA (Promoting Women in Academia) for outstanding female researchers at postdoc level.

“It’s a privilege to work here,” says the mathematician. Mathilde Bouvel works part-time, and is very happy that she is able to juggle research and family life. She also enjoys the family-friendly atmosphere of the Irchel Campus, which she says is highly regarded and well connected in the world of academia. Because she lives close to campus, she is even able to breastfeed the baby regularly during the working day – and then return with a clear head to working out new permutations.

The Marie Heim-Vögtlin Prize 2017, awarded by the Swiss National Science Foundation (SNF), will be presented during an event to be held at UZH on 16 November 2017 commemorating Nadezhda Suslova. The Russian Nadezhda Suslova (1843-1918) was the first woman to earn a doctoral degree from the University of Zurich, 150 years ago. She became the first university-educated female physician in Russia. Many Russian women then followed Suslova’s example and came to study at the University of Zurich. In 1873, there were 117 Russian women studying at UZH, making up a quarter of all students at the university that year. Nowadays, of course, there is nothing unusual about women studying at university, and in fact for the last few years women have outnumbered men at the University of Zurich, with 57% of students being female.

Please note: The event on 16 November is fully booked.