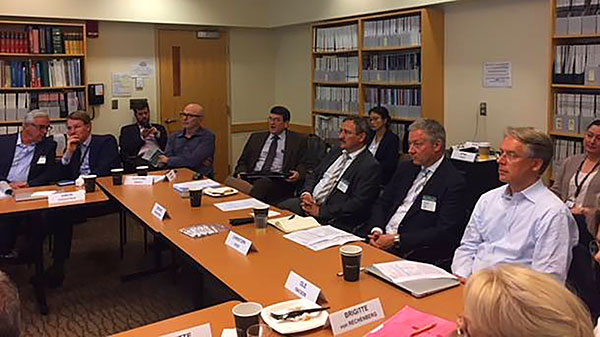 Boston is a university town boasting a wealth of prestigious higher education and research establishments. UZH already has cooperation arrangements with more than 20 university institutions in the Greater Boston Area – lively partnership evidenced among other things by around 1,400 co-publications in 2016/17.

To further deepen collaboration with universities in and around Boston, last week the UZH executive board spent two days on the east coast of the US, accompanied by deans and two UZH professors. The trip focused on two main themes: Medicine, Entrepreneurship & Innovation, and Digital Society & Law.

The Medicine, Entrepreneurship & Innovation program kicked off on Thursday with a visit to the Harvard Stem Cell Institute (HSCI). The meeting with HSCI executive director Brock Reeve and his team underscored the numerous opportunities for cooperation still to be explored.

The goal of the interdisciplinary Jet Valve project is to create a next-generation heart valve that functions accurately upon implantation and regenerates into long-lasting, heart-like tissue. The advantage when used in children is that it can reduce the need for heart surgery because the tissue grows along with the patient. A collaborative team structure bringing together unique, leading expertise in bioengineering, regenerative medicine, and surgical innovation from across the three partner institutions enables the team to advance the development of the technology in ways not possible in a conventional academic laboratory.

The delegation’s visit to the Martin Trust Center for MIT Entrepreneurship built on an initial meeting with center director Ed Roberts in 2015. A lot has happened at UZH in the meantime. Since September 2016, the Institute for Regenerative Medicine IREM has set up a BioEntrepreneurship & Innovation program offering advanced training for researchers in life sciences. Both sides displayed a great deal of interest in initiating a partnership, with exchange programs for students and young BioEntrepreneurs under discussion.

The interdisciplinary path to success

The second focus of the visit was on Digital Society and Law. The other half of the UZH delegation visited research institutions at Harvard University and MIT that are addressing issues related to digital society and the law. The idea was to gain insights into the way the host institutions are organized, and the experience they have gathered in this field, to feed into the set-up of the Digital Society Initiative at UZH.

The Berkman Klein Center for Internet and Society at Harvard University, where UZH professor Christoph Graber is currently spending a sabbatical, is linking the analysis of extensive data with qualitative media research. Executive director Professor Urs Gasser, co-director Yochai Benkler, and other researchers talked about the history of the center and how it is organized, and the latest findings from its research.

Besides visits to the MIT Institute for Data, Systems and Society (IDSS), the MIT Sloan School of Management, and the MIT Media Lab, the program also took in the Ash Center for Democratic Governance and Innovation at Harvard University. A special feature of the Ash Center is the way it cooperates with authorities and cities to enable students to apply their knowledge while they are still studying.

What all the institutions visited by the delegation have in common is their interdisciplinary approach, their great emphasis on research done by PhD candidates and postdocs, and regular dialogue with researchers from all over the world. Many of the institutions showed an interest in harnessing and extending synergy with UZH, for example via joint teaching programs and research exchanges.

During the trip, swissnex Boston also invited the delegation to a UZH Night. In his address, UZH President Michael Hengartner, who himself did a PhD at MIT, pointed out the importance of international cooperation for the success of the University, saying that the numerous cooperation arrangements already in place with researchers in the Greater Boston Area suggested UZH was well on track.