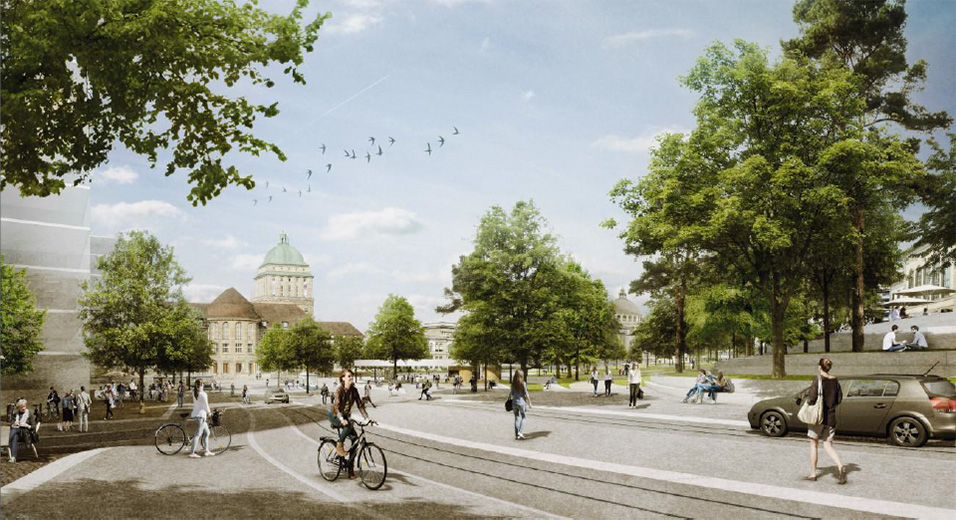 Image Gallery
Hochschulgebiet
A glimpse of the future: This is what the area around the University could look like in ten years. (Image: © Werk 3 - Architekturvisualisierungen)

The media conference focused on the proposals for the design of the open space between the old and the new buildings. The team from Studio Vulkan and KCAP Architects & Planners were asked to come up with a new urban space concept. According to this concept, all parts of the university campus will be optimally connected with each other and embedded within the surrounding neighborhoods.

At the same time, there will be attractive squares, green spaces, and terraces where people can get together and pass the time. Areas throughout the campus will be open to the public, complementing the existing facilities, for example meeting places, libraries, kiosks, and cafeterias. The urban space concept exemplifies how planned development can remedy current shortcomings of urban growth.

Now, based on the urban space concept, a white paper will be drawn up establishing the basic principles for a sustainable and appealing university campus.

Main building for the 21st century

UZH is now preparing the competition phase of a new teaching and learning center on the Wässerwies site, opposite the university’s current main building. At the media conference, UZH President Michael Hengartner described this center as a “main building for the 21st century”, which would be named Forum UZH.

The Forum UZH, similar in style to a Roman forum, will be an inviting place for students to spend time studying or socializing, with a variety of differently configured spaces for teaching and learning, as well as for hosting public events – for instance the Children’s and Senior Citizens’ University or Scientifica events.

From December, teams of architects can enter a preselection round which will take place ahead of the formal architectural competition for the Forum UZH. Between nine and 12 teams will then be selected by an international jury by around March 2018. If everything goes according to plan, construction will begin in 2020/2021, and it is envisaged that the project will be completed by 2025.

The project partners have now opened an information booth in the former anatomy building of UniversityHospital Zurich at Gloriastrasse 19 so that members of the public who are interested in the university district can gain a clearer idea of the plans. Opening hours: Weekdays from 8:00am to 6:00pm