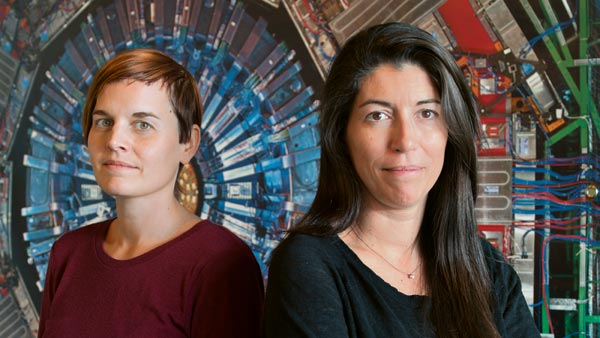 Pulsating points of light stream up the hundred-odd-meter shaft. We’re at “Point 5” of the CERN Large Hadron Collider (LHC) particle accelerator deep below an unassuming looking factory building in the middle of a large field close to Geneva. “The lights symbolize the stream of data constantly generated by the CMS detector,” explains particle physicist Florencia Canelli. The CMS, or Compact Muon Solenoid, two floors below us, is one of the huge devices that can detect the particles produced by collisions in the LHC.

Canelli and her former senior teaching and research assistant Lea Caminada, who now works at the Paul-Scherrer Institute (PSI), were involved in developing the so-called pixel detector, a joint project run by the groups headed by Canelli and Ben Kilminster at the University of Zurich, the ETH, and the PSI. The pixel detector is the innermost component of the CMS, a mere three centimeters from the collision point. It enables the charge, location, and direction of the the particles produced by the collision to be measured.

With four concentric silicon detector layers (as opposed to three before) with a higher pixel density of 124 megapixels, and a capacity of 40 million images per second, the new detector enables the particules and their position to be measured with even greater precision. A few weeks ago the pixel detector, around 50cm in length with a diameter of 30cm, was installed at the heart of the gigantic, 22m-long, 15m-high CMS detector.

Caminada, who oversaw the commissioning of the detector, bore a huge responsibility, as there won’t be an opportunity to intervene or fix the detector until January 2019, when the LHC is taken out of service for protracted maintenance work.

Key to the new physics

Canelli and her colleagues want to use the data from the CMS detector to unlock the gates to the so-called new physics. This is the physics beyond the Standard Model currently used to explain elementary particles and their interactions. The Standard Model functions very well and has been vindicated in countless experiments – most recently in the celebrated discovery of the Higgs particle. This was predicted by the Standard Model, but its existence could only actually be demonstrated a few years ago, among other things in the CMS detector. But the model leaves a few fundamental questions unanswered – for example the question of dark matter.

Observations and calculations of the universe show that alongside the matter that we can see and measure, there must also be a massive quantity of invisible or dark matter. “One conjecture is that dark matter also consists of particles,” notes Canelli. “But since they virtually never interact with the other known particles, so far they’ve remained invisible to us.” If dark matter is made up of particles, it should also be possible to produce these particles in the LHC “the same way we produce all the other particles,” says Canelli. But there’s a problem: “Dark matter particles don’t leave any signals when they pass through the CMS detector, so we can’t see them.”

Florencia Canelli’s efforts to hunt down dark matter in the collisions taking place in the LHC have led via a special member of the particle family, the so-called top quark. Canelli has been fascinated by the top quark ever since writing her dissertation on the subject: “The top quark has special properties because it has a mass around 40 times greater than the other quarks,” she explains. “For example, it interacts much more strongly with the Higgs boson than other particles do.” The top quark’s special properties make it an interesting candidate for the search for a physics beyond the Standard Model. “I’m pursuing the top quark everywhere it figures in the theories of new physics,” says Canelli.

One of these trails has led her to the dark matter particles which might possibly be produced together with top quarks. This is the hypothesis Canelli is trying to demonstrate in the data from the LHC. She’s looking for “lonely” top quarks: those that have apparently not been produced together with other particles. If after a collision a top quark particle is produced in a specific position with a specific direction, according to the law of conservation of energy the same energy must also exist in the opposite direction.

In other words, there must be one or more other particles that arise as a complement to the top quark. These can be, for example, Higgs particles, Z bosons, or any other particles that can be registered by the detector. “But it’s astonishing if I see a top quark and nothing else with it. That shouldn’t be happening,” says Canelli. “It tells us that something else is there, even if it’s not interacting or leaving any traces in the detector.” This is precisely the behavior you’d expect from a dark matter particle.

What sounds fairly straightforward in theory turns out to be a huge challenge in practice, as even the top quarks themselves can only be demonstrated indirectly in the detector. Because they’re so heavy they decay much too quickly to leave traces, and can only be reconstructed on the basis of their decay products. This requires complicated statistical procedures to identify with the necessary certainty the particles produced from the massive number of signals a collision in the detector produces.

But that’s no reason not to keep on hunting. “We’re using a wide range of different approaches in our search for dark matter. We have to keep on going.” That the search will continue is not in question. On the way back from Point 5 to CERN headquarters, Canelli and Caminada are already discussing how to further improve the pixel detector for the next phase.