This was published in the current UZH Magazine 3/17 (In German). 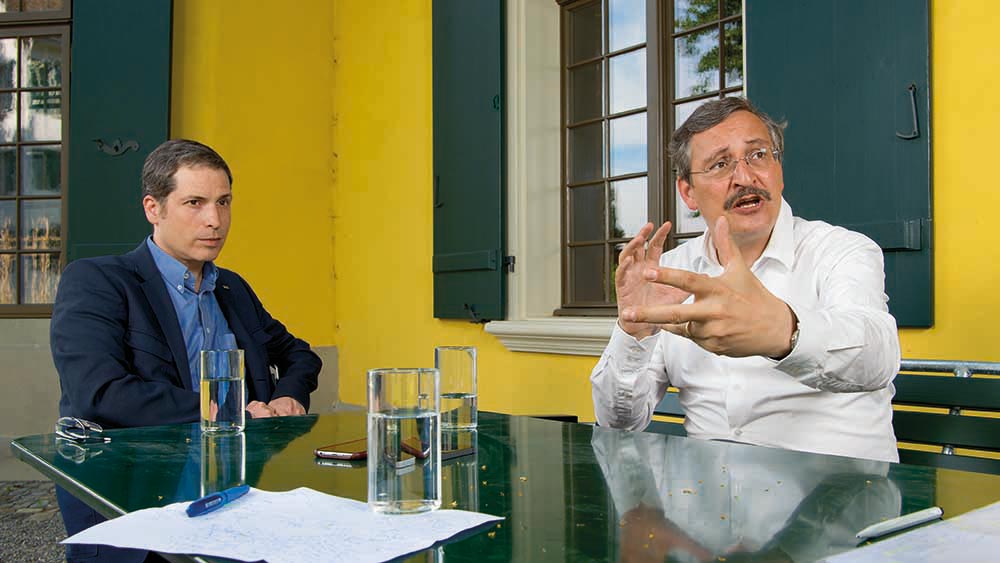 Bernstein und Hengartner
“In the digital space, the competition of ideas takes place permanently and on a global basis.” Abraham Bernstein (left) and Michael Hengartner discuss the potential of digitalization. (Image: Ursula Meisser)

Abraham Bernstein, Michael Hengartner, digitalization is rapidly making inroads into our daily lives. How are computers, the internet, and social media revolutionizing our lives now, and how will they do so in the future?

Abraham Bernstein: Thanks to digitalization we can communicate with anyone we like, any time and any place. This is removing the boundaries of space and time. What’s more, it’s getting cheaper and cheaper to gather and process data. These days we can store and analyze information in completely new ways. This is creating entirely new possibilities: for example artificial intelligence systems can help us make decisions, and research teams with members all around the globe can operate 24/7. We’re going to discover totally new ways of organizing ourselves, collaborating, and communicating.

Bernstein: Democracy, for instance, was invented at a time when the quickest way of transmitting information was by horse. That’s why we still use paper to vote. Now it would be technically possible for a million people to intervene in a debate in parliament and use social media to express their opinion on draft legislation. That could completely transform the democratic process.

Michael Hengartner: We’re also seeing massive changes in our day-to-day lives. I observe this with my daughters. They have much more intense interaction with their friends, but the communication only takes place in a virtual space. When I was young I was often visiting friends, or they came to see me. This happens a lot less now with my daughters.

What does the digital revolution mean for science?

Bernstein: With the availability of growing amounts of data, researchers will increasingly be asking questions that they try and answer with data sets that already exist. More and more science will be done by machines. In research into yeast, there are devices that construct their own hypotheses and then conduct an experiment to test them. In statistics there are also programs that evaluate data and come up with new theories that they then test. Because communication is getting easier, citizen science will also gain in importance, with scientists able to incorporate knowledge and data from laypeople all over the world into their research. To promote and develop this approach, UZH has joined forces with ETH Zurich to establish a citizen science center.

What will happen to scientists once machines are doing everything? Will they soon be surplus to requirements?

Hengartner: No. But they’ll have to keep educating themselves on a permanent basis. Data-driven research will also have to figure more prominently in training and degree programs. These days it’s important for people doing research in the social sciences to know how to deal with large sets of data. Biologists are also increasingly working quantitatively, which is leading to new ways of analyzing. Of course this is really exciting, something that’s accelerating research.

Abraham Bernstein, you have a vision of a “global brain” made possible by digitalization. What’s behind this idea?

Bernstein: Thanks to collaboration in the digital space, the competition of ideas is no longer subject to limitations of time or location, but takes place permanently and on a global basis. There are digital networks of people thinking about a whole variety of different issues – both scientists and laypeople. Added to this you have the contributions made by computers and systems with artificial intelligence. All these processors are interacting with each other. If they’re successful they could lead to unexpected ideas and solutions to problems.

Bernstein: The New York city administration was thinking of ways to reduce air pollution. It put out a request for online suggestions which citizens could then vote on. This resulted in a list containing the sort of ideas you’d expect – for example increasing the use of catalytic converters and car-free Sundays – but also unexpected ideas. For example the suggestion that cruise ships around Manhattan should be given an electricity connection. The rationale was that these ships burn huge amounts of incredibly dirty oil which they use to generate electricity. By connecting them to the mains they could achieve bigger reductions in harmful emissions than by fitting a large number of cars with catalytic converters. It’s a simple, ingenious idea, but somebody had to come up with it. Such ideas can emerge from collective intelligence enabled by digital media.

Michael Hengartner, do digital media function as idea generators in biology as well?

Hengartner: Yes. A good example is precision medicine. The idea is to try and provide patients with customized therapy by making as precise a diagnosis as possible. On the basis of diagnoses of this sort and the patient’s individual physical condition it’s then possible to determine the ideal treatment. We now know, for example, that every breast cancer is more or less unique. These days we can sequence the genome and measure the proteome. An analysis of this data gives pointers as to which antibodies might be effective. In other words, the search for an effective therapy becomes much easier and quicker. This boosts the success rate and can enable us to reduce treatment costs. 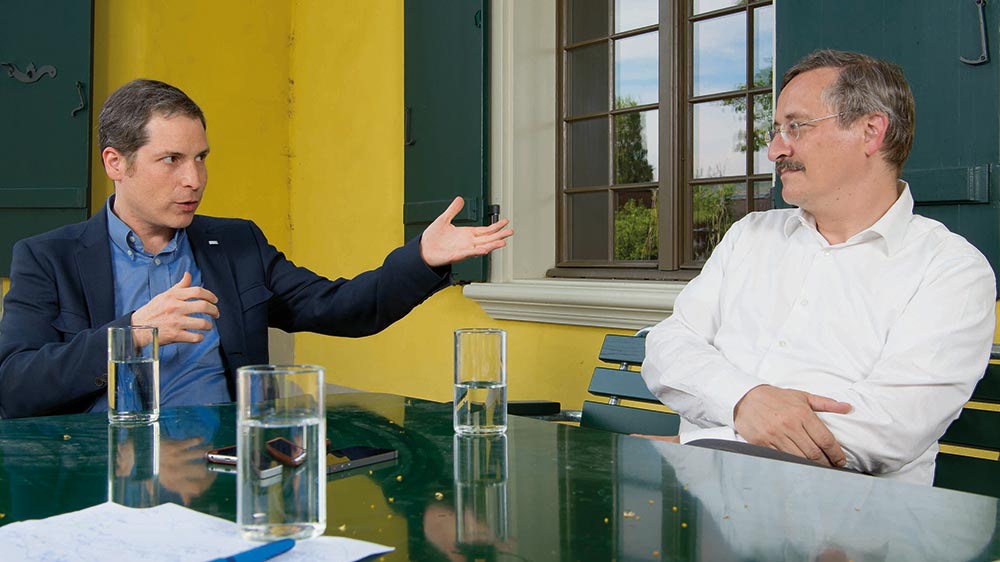 Alt
“We have to think carefully about what tomorrow’s graduates will need to know.” Abraham Bernstein (left) in discussion with Michael Hengartner. (Image: Ursula Meisser)

In the future will there be researchers in biology who only stand in the lab doing experiments, and those who analyze datasets?

Hengartner: It’s already the case. Many bioinformaticians spend their entire time at the computer working with data generated by other people. Most bioinformaticians have little or no lab experience. This specialization on data-based research is now to be found everywhere in science.

What does this mean in terms of training and education?

Hengartner: Study programs have to start out broad, with people specializing afterwards. A broad basic training should help create a foundation for representatives of different disciplines to still be able to understand each other further down the line. A bioinformatician has to know how experimental research in the lab functions. An experimental scientist, for her part, must be able to assess the quality of data and know what the strengths and weaknesses of a dataset are. We can’t have a situation where what the bioinformatician does is a mystery to the scientist in the lab.

Bernstein: We have to think carefully about what tomorrow’s graduates will need to know. A hundred years ago every scientist had to know Latin. We should be asking ourselves what the modern equivalent of Latin is. It’s clear that researchers and students have to be able to deal with data. They have to understand that every dataset has a certain bias, otherwise they’ll make mistakes when interpreting it. And they should be able to handle probabilities. After all, even today’s DNA tests aren’t 100 percent accurate.

Will programming be the new Latin of science, a skill that scientists have as a matter of course?

Bernstein: Students certainly have to develop a feel for data and the virtual world, otherwise they won’t be able to do science. We don’t have to reorganize the whole course of studies, but certain areas have to be augmented. This is already happening. For example, think of the way statistics has been made part of the basic training in many disciplines – including psychology and linguistics.

Digitalization will fundamentally transform our lives, and science as well. How should society be responding to the digital revolution?

Hengartner: As the academic, scientific, and economic center of Switzerland, Canton Zurich needs to face the challenges of digitalization. UZH has a key role to play here. The University of Zurich already has broad interdisciplinary know-how in this field. By bundling and building on this knowledge we can do broad research on the process of digitalization and help shape innovation. This is why UZH has launched the Digital Society Initiative (DSI), and intends to create a digital society center. The idea is to concentrate skills and resources in this area that are already available at UZH. This way we can help ensure that Zurich is equipped for new challenges and is able to establish itself firmly as a leading center of digital innovation.

Bernstein: It’s key for UZH to explore and engage with the interplay of digitalization and society. Digitalization isn’t primarily a technological development. It’s about how we use technology. It affects society and the economy alike. Technology is driven by social processes. We want to investigate what’s happening there. On the other hand we also have to think about what challenges society will face in the wake of digitalization, and how we’re going to gird ourselves to deal with these developments.

What are UZH’s strengths in terms of research into digitalization?

Hengartner: For us the most important thing is the breadth of knowledge available at UZH, and the completely new insights and perspectives that can emerge if we bring this knowledge together. As Switzerland’s most diverse university, UZH is ideally equipped for this. The broad knowledge and interdisciplinarity UZH brings to the table are key if we want to do research on digitalization. For example, no IT expert can answer the question of what it will mean if computers are doing our work in the future. We should be substantially boosting Zurich as a center of research. The emphasis should be on securing the skills and resources of the population. We want to invest in training, promote interdisciplinary innovation, work out future scenarios on a participative basis, and create an appropriate framework.

Bernstein: In recent years UZH has already managed to create major independent research centers with an international reputation and impact and a great deal of innovatory power: the Wyss Translational Center Zurich in the field of medicine, and the UBS International Center of Economics in Society. We want to achieve something similar with the planned digital society center (DSC), to be able to respond to the fundamental changes brought by digitalization.

Hengartner: We intend to create new professorships and research groups in data-intensive disciplines and for data-intensive research and teaching methods. We also want to establish innovation research groups. Education and research should be developed together on an interdisciplinary basis. It’s also important to recruit outstanding junior researchers who are working with colleagues in other disciplines to examine the implications of digital transformation.

Can UZH master this task on its own?

Hengartner: We want to take a pioneering role, but naturally we’ll be working with partners and other universities when the opportunity arises. In the future we want the digital society center to evolve into a workshop for highly practical, forward-looking ideas. UZH intends to use its own resources to do so, but we’re dependent on additional financial support from business and society at large. Nevertheless, I’m convinced that the planned center will add value for society, the economy, science, and research.