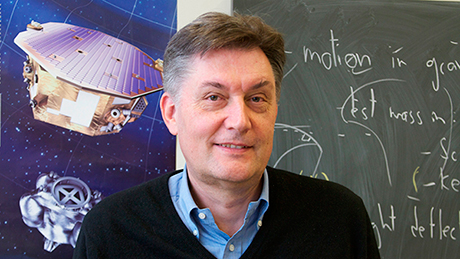 “This technology will enable us to listen to the very edges of space." Philippe Jetzer, Specialist for Albert Einstein's theory of relativity. (Image: Stefan Stöcklin)

When a Vega rocket is launched from French Guiana early in December, one man will be especially excited: Philippe Jetzer, Professor of Physics at the University of Zurich. “I’ve been looking forward to this moment for a long time,” says the tall man who specializes in Albert Einstein’s theory of relativity. Jetzer will even be able to follow the launch from the spaceport near Kourou, as he’s celebrating an important milestone in his scientific career: for the last twelve years he’s been working on the LISA Pathfinder probe that the rocket will take into space. If the mission comes off, in the next few months the data sent back to earth will show whether the concept and technology behind LISA Pathfinder are successful in terms of detecting gravitational waves. This is the precursor to the direct proof that will be delivered in a subsequent mission called eLISA.

At the limits of measurability

Jetzer is a member of the scientific team responsible for LISA Pathfinder, and along with Domenico Giardini, Professor of Seismology and Geodynamics at ETH Zurich, is a prominent representative of Switzerland in the international project running under the leadership of ESA, the European Space Agency. In recent years the scientists have been working with technicians to design and build highly sensitive detection equipment, which they’ll now be able to test as part of the satellite mission. The equipment must be able to put two test masses in a gravitational free-fall, and control and measure the tiniest changes in the distance between them. This will require a breathtaking degree of precision corresponding to a fraction of the size of an atomic nucleus, in the pico range (10 to the power of negative 12). By way of comparison, in a picosecond light – which can travel the distance from the earth to the moon in a second – covers only three hairsbreadths (around 300 µm).

This incredible degree of sensitivity is necessary to measure the gravitational waves postulated by Albert Einstein. According to his theory of general relativity, accelerated masses modify their gravitational field and create a ripple that moves through space like waves – comparable to the waves produced by throwing a stone into a lake. While gravitational waves penetrate space and matter, they’re extremely weak and so far have never been recorded directly. The concept of detecting gravitational waves in space is based on the premise that the distance between two masses will undergo a slight change when a gravitational wave passes through. This change, a matter of fractions of a picometer, will be recorded by laser beams reflected between the masses. Experts call it laser interferometry, and LISA stands for Laser Interferometer Space Antenna.

Signals from the depths of space

“In space we can eliminate undesired effects such as ground vibrations that would affect our measurements,” explains Philippe Jetzer. This is one reason why the researchers are resorting to space in their attempts to detect gravitational waves. But an even more important reason is to achieve greater sensitivity: in the final eLISA project three satellites will be linked to enable the observation of two test masses a good million kilometers apart – around 25 times the circumference of the earth. It’s impossible to build such a long and sensitive interferometer on the earth.

In space it will be possible to detect low-frequency gravitational waves (0.0001–0.1 Hertz) from far-distant regions of space. “This technology will enable us to listen to the very edges of space,” says Philippe Jetzer. This increases the chances of success, as only extreme cosmic objects leave measurable traces. For example detectable gravitational waves result from the production or fusion of black holes at the center of galaxies such as the Milky Way. The scientists are also hoping to gain new insights into the formation of the universe. “Gravitational waves are like messengers of hitherto hidden areas of space,” explains Jetzer.

Cubes of gold and platinum

Getting that far will take time, with eLISA scheduled for 2034. Once it’s launched,
LISA Pathfinder first has to reach its destination around 1.5 million kilometers from earth. This will be followed by two three-month measurement periods. “Then we’ll see whether the systems are functioning as planned and meet requirements,” says Philippe Jetzer. 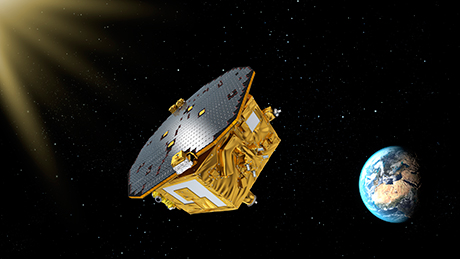 Basically nobody doubts the existence of gravitational waves, as their existence has already been confirmed indirectly. In the 1970s two astrophysicists, Joseph Taylor and Russel Hulse, observed two neutron stars (pulsars) rotating around each other. Their measurements showed that the change in the orbital period of the pulsars exactly matched the energy loss in the system that would be expected as a result of gravitational wave emission. These findings earned them the 1993 Nobel Prize in Physics. Since then, researchers have been striving to find direct proof. At various sites physicists have constructed interferometers, some of them gigantic in size, that could measure changes in length due to gravitational waves. They include the Laser Interferometer Gravitational Wave Observatory (LIGO) in the United States, and VIRGO in Italy. Even though they have different sources of gravitational waves in their sights, Jetzer explains that the various teams involved in the projects collaborate at a scientific level.

Symposium at the Irchel Campus

As far as detecting gravitational waves in space is concerned, Philippe Jetzer hopes the LISA Pathfinder mission will be a success. The launch on December 3 is a good omen, as it’ll be exactly 100 years since Albert Einstein published his general theory of relativity. In September 2016 the University of Zurich’s Irchel Campus will host a symposium to survey the initial findings of the LISA Pathfinder mission.