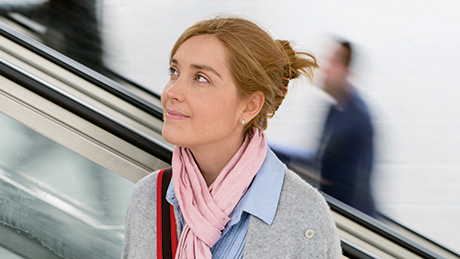 On the move: Sociologist Claudia Vorheyer is investigating the behavior of transnational mobiles. (Image: Marc Latzel)

The Schneebergers were a family on the move. The father had a career at a multinational company. His wife and two children traveled with him from continent to continent. Eldest son Sebastian was born in Germany. When he was three months old, the family moved to Australia. This was followed by stays in New Zealand, England, Scotland, Nigeria, Saudi Arabia, and Bahrain. Sebastian and his brother went to local and international schools. Mother Helga was able to maintain a lifestyle abroad that wouldn’t have been affordable in Germany. Thanks to the good salary and expatriate allowances, paying for international schools wasn’t a problem.

Sebastian and his brother grew up in different national and transnational cultures. But to what extent did this way of life extend their horizons? Have these young men grown up to be cosmopolitans who can make their way through the world as easily as fish through the oceans?

Sebastian, now age 23, tells UZH sociologist Claudia Vorheyer how he experienced his childhood and youth, and what he plans for the future. He’s an interesting candidate for the researcher because he’s a typical example of a so-called transnational mobile. Since these people live in different cultures from childhood on, sociologists also call them “third culture kids.”

What happens when people’s sense of belonging is no longer tied to a particular place? Sebastian experienced his childhood in Africa as a bright, exciting time. But then, after a vacation with his grandparents in Germany, it was suddenly announced they weren’t going back. That was a very bitter experience for the ten-year-old; he had no chance to say goodbye to his friends. After the warmth of Africa he went to school in London, where he remembers everything as being gray and cold.

Not only that, but all his schoolmates in England saw him as a German even though, having spent only the first three months of his life in Germany, he hardly felt that way himself. Only when he moved to another school with kids from many expat families did he emerge from his shell again. Sebastian is linguistically gifted and adept – a kind of cultural chameleon. When he goes to a new country he quickly learns the local dialect. He feels well in transnational contexts, and is toying with the idea of one day founding a business in Saudi Arabia.

At home in many countries

Until now there has been little systematic research done into these modern nomads who feel at home in so many countries. We know that they’re generally better educated and earn more than the average member of the population. But what we don’t know so much about is the way this nomadic way of life affects people’s identity, and their attitudes to ideas of foreignness and home.

“On the one hand crossing borders broadens people’s horizons and makes their experience more varied and heterogeneous. On the other hand it also brings uncertainty and insecurity,” explains Claudia Vorheyer, a senior teaching and research assistant at the UZH Institute of Sociology. She has made these nomadic cosmopolitans – and in particular people who voluntarily move from country to country – the focus of her research.

She’s convinced that transnational lifestyles will become increasingly important as the world gets more mobile and globally connected, and claims that the prevailing picture of nationally demarcated societies with their sedentary citizens has long been challenged by our globalized world.

Vorheyer explains that transnational mobiles don’t see themselves as migrants, a category that doesn’t apply to them in any case. Migrants move from “home” to “not home.” By contrast, transnational mobiles live in more than three countries, which intensifies their cultural experiences. But how do these experiences impact their attitudes to life and their sense of identity?

Where do citizens of the world feel at home?

Sociologist Vorheyer is using biographical interviews in an attempt to answer these questions. This, she says, is the only way of understanding the spatial and social contexts in which transnational mobiles have grown up, and the extent to which they are molded by earlier experiences of mobility and migration. She also wants to find out what culture they feel they belong to, and to what degree their way of life has produced a sense of being cosmopolitan.

Regardless of the different ages and biographies of her interviewees, in every case she’s found that these transnational mobiles chafe at the question of national or cultural identity. Sebastian, for example, doesn’t feel he belongs to any nation. “I belong everywhere and nowhere,” he says. As a typical third culture kid he can’t place himself in any nation; he sees himself as a citizen of the world, which in his case goes hand in hand with a great openness to other cultures. But Vorheyer has discovered that not all transnational mobiles are cosmopolitans who are open to other cultures. Despite highly mobile lives, while some feel like Europeans or world citizens, others stress their connection to the country of their birth.

It’s possible to distinguish between various forms of being cosmopolitan: moral, cultural, and political. Some transnational mobiles display great interest in other cultures or stress their belief that all people are equal; others develop a global political perspective while still feeling they belong to a particular nation themselves.

Life in an expat bubble

Claudia Vorheyer distinguishes between banal and reflexive cosmopolitanism. “Reflexive” refers to those who actively engage with the countries and people, show interest in the local culture, and learn the local language. These people tend to see differences as something positive, and take a critical view of their own nation. But there are also cases of negative stereotyping, and people aren’t always able or willing to engage with the country and its culture.

A life with maids and chauffeurs

This “banal” cosmopolitanism can include people who adopt the stance of consumers who judge countries on the basis of the goods on offer. They view typical foods, tourist attractions and leisure activities as culturally enriching. This is the case for Christine, a 58-year-old housewife who has accompanied her husband, a manager at an international chemicals company, to Portugal, Algeria, Pakistan and the United Arab Emirates. Christine describes this path as a process of working their way up from less attractive to better countries.

She values their comfortable life, which includes a maid and chauffeur, and seeks contact almost exclusively within the expat community. Despite having seen so many countries, ultimately she lives in her own small world, and only judges other places and cultures from her own perspective.

Always ready to move on

Of all the transnational mobiles interviewed by Claudia Vorheyer, only two now live in their country of origin. In general she has observed a great readiness among these people to repeatedly leave and move on.

“People who return from long stays abroad find not only that they’re no longer the same person, but that their home environment has changed too,” says Vorheyer. For this reason many repeatedly return abroad. The nomadic lifestyle is a need, despite the effort and inconvenience involved: Being on the move becomes a fundamental way of life.