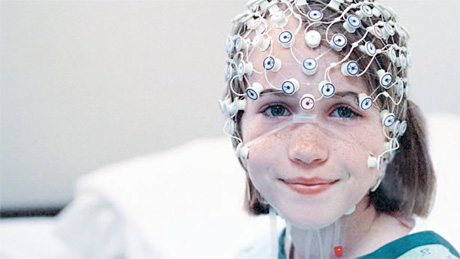 What exactly happens in the heads of young children as they acquire a foreign language? Psychologist Urs Maurer, Professor of Cognitive Neuroscience at the UZH Department of Psychology, has looked into this question in a long-term study of 100 schoolchildren supported by the Swiss National Science Foundation.

His findings confirm that it’s worth starting to teach foreign languages as early as possible, because at this age kids are also working very hard on the neural level. “Young people’s brains are particularly good at processing speech sounds,” Maurer explains. Up to around age seven, children can learn a foreign language nearly as easily as their mother tongue.

Foreign speech sounds in the brain

In Zurich, where early English starts in second grade, Maurer gave children one brief test before they started learning English, and one a year later. His control group consisted of children of the same age in Bern, where kids don’t learn foreign languages until later, starting French in third grade and English in fifth grade.

He found that after a year of early English, some of it stuck. The group of Zurich schoolchildren had a larger English vocabulary than the Bern control group. However, electroencephalogram (EEG) measurements of electrical activity in the brain produced less clear-cut findings. “Language processing in the brain isn’t much further advanced after a year of English lessons,” Maurer found. Early learning doesn’t seem to take hold at the neural level.

Researchers arrived at the same result when they repeated the test after a year of English lessons. Does this mean early English isn’t child’s play after all? Has the hope that Swiss children will one day speak English like natives been shattered?

Urs Maurer believes that the way foreign language teaching is currently set up at primary schools – with two lessons a week in Canton Zurich – doesn’t allow the neural mechanisms to take hold. “While it’s true that children’s brains process speech sounds particularly well, they need intensive training for this to happen.” If we want our kids to learn foreign languages nearly as well as their own mother tongue, we’re going to have to teach them for much longer, and more comprehensively.