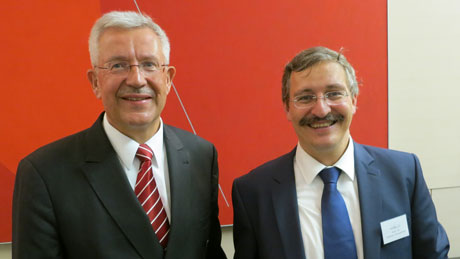 Paris, Nigeria, New York, and Brussels have been only some of the stations in Martin Dahinden’s career as a diplomat. He’s a true citizen of the world. Since November 2014 he has served as Switzerland’s ambassador in the US capital Washington, D.C. In this capacity he took part in the inauguration of UZH’s new alumni chapter last Thursday along with around 45 alumni and friends of the UZH, and president Michael Hengartner.

Martin Dahinden had been invited to host and speak at the event as a prominent UZH alumnus. In the 1970s he studied business at the University, before working as an assistant and writing his PhD at the Research Center for Social and Economic History. He simultaneously served as president of the Association of the Non-Professorial Academic Staff of the University of Zurich (VAUZ) for a time.

In his address to the alumni he looked back over these years. “The things I learned and experienced at the University of Zurich have always been beneficial later on in life,” explained Dahinden, who said he learned among other things how to deal with challenges – a particularly useful skill in his subsequent role directing the Geneva International Center for Humanitarian Demining (GICHD).

Dahinden reflected that without his degree in business administration and broad interest in politics and culture, he would probably not have had his previous job as director-general of the Swiss Agency for Development and Cooperation (SDC). And now, as Switzerland’s ambassador to the US, he gets to grasp another unique opportunity: “A dream job for any diplomat.” 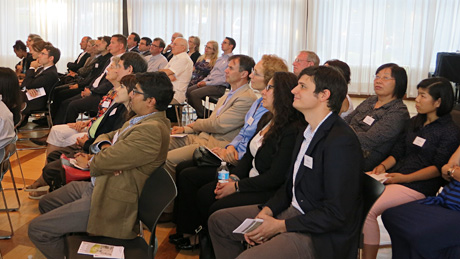 Around 45 UZH alumni and friends of UZH took part in the inauguration of the new chapter in Washington, D.C. (Image: Kim Hunziker)

Washington joins San Francisco, Boston, New York, and Los Angeles as the fifth city in the United States with a UZH alumni chapter. One of the reasons for choosing the nation’s capital for the new chapter was that, as a political center of power, it hosts organizations such as the International Monetary Fund and the World Bank where UZH alumni also work.

But the main reason is the Greater Washington Area with its 5.5 million inhabitants and numerous outstanding universities and research institutions, including Georgetown University, George Washington University, the Smithsonian Institution (a research center and museum complex), and the National Institutes of Health (NIH) in neighboring Maryland.

The establishment of the fifth alumni chapter was possible thanks to close collaboration between UZH and the Swiss embassy in Washington. As part of a university internship at the embassy, since March 2015 Flavia Amann has been seeking out graduates of the University of Zurich on behalf of the International Relations Office and Alumni UZH. She was able to track down and contact around 80 people, many of them via social networks on the Internet. Around 50 of them expressed interest in a local alumni group, and five said they would be prepared to serve on the committee.

Some 45 alumni and friends of UZH took part in the inauguration last Thursday. Particularly interesting for them was the opportunity to hear about the latest developments at UZH first hand, and from the president in person. For example, Michael Hengartner explained the University Research Priority Programs and existing partnerships with universities in the Washington area, and related how researchers from Zurich and Washington already take part in regular exchanges.

The aim is that the new alumni chapter will help intensify contact with establishments in the area. President Michael Hengartner also used his stay as an opportunity to meet with representatives of universities in the Greater Washington Area. UZH is also interested in establishing student exchanges with Washington universities. Places in the US are highly sought after. 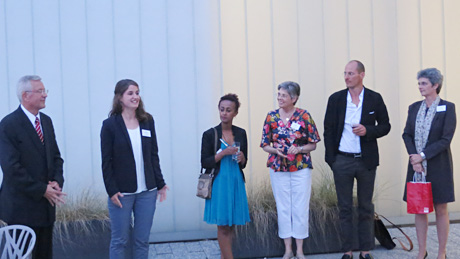 One of the guests at the inauguration of the alumni chapter was Josh Stevens from the NASA Earth Observatory near Washington. He is drawing on insights from the cognitive sciences and cartography in an attempt to improve the color rendering of satellite images and make them easier to read. In the course of his work he spent two months at the UZH Department of Geography in 2013. So he is now also a member of UZH Alumni and Friends Washington, D.C. Following the speeches, the alumni and friends of UZH were invited to dinner at the residence of ambassador Martin Dahinden.

UZH members going to Washington, D.C., to do research or attend conferences are invited to contact the alumni chapter (for a meeting, presentation or lecture, etc.).